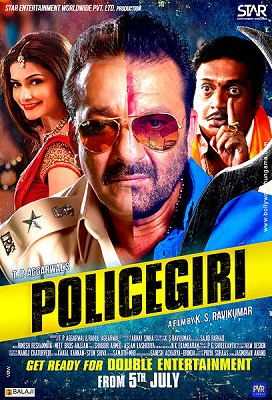 “Assault on the senses” is such a critics’ cliché. Films like this are why the phrase is indispensable though. Policegiri – which marks the Hindi debut of Tamil director K.S. Ravikumar – is noisy, garishly coloured and crudely plays to the gallery (everyone hate politicians so of course we’re expected to cheer for a cop who batters them). It also works on the stereotypical hero + villain + hero’s ‘love interest’ + comedian + songs + fights formula with complete lack of imagination. At places even the production quality is tacky with virtual studios seeming to stand in for real locations and so on. Worst of all, it stars Sanjay Dutt and Prachi Desai.
Sanjay at his best in the past has been lovable on screen. These days though he usually lumbers through his films in a tragic imitation of a former swagger, while camerapersons work hard to camouflage his girth. What has our Munna been reduced to? In Policegiri he makes it worse for himself by starring as the boyfriend of a certain Seher played by that sweet-faced, girlish-looking actress Prachi Desai who is young enough to be his daughter and looks like she could be his grandkid. It’s ewwww-worthy. The only thing even partly as disturbing to come from a major Bollywood star in recent years has been Salman Khan in love with baby-faced Sneha Ullal in Lucky: No Time For Love.

The story of Policegiri, for what it’s worth, is about the shenanigans of DCP Rudra Aditya Devraj, newly transferred to Nagapuram in Andhra Pradesh. Rudra first puts the fear of God in the local police, then having inspired their loyalty, proceeds to put the fear of God in the underworld. He doesn’t mind taking bribes though, if the hoodlum in question agrees to adhere to certain ground rules. He even sings a song that goes: “Banda good hai / Dil ka shuddh hai / Action hero aur naam Robin Hood hai.” Hmmm… Robin Hood! Now who does that remind us of? Hmmm... Think!

Let’s be clear, this is not about intellectualising an old-fashioned action flick where the hero bashes up dozens of villains single-handedly. Salman did precisely that in Dabangg with supremely entertaining results. The difference though is that Sallu at 47 still looks lithe enough to do impossible stunts (well, not counting Ek Tha Tiger in which he looked fatigued). Across the seas in Hollywood, Tom Cruise at 51 actually does look like he could run like the wind as Ethan Hunt does in the MI series. And however laughable it may be, Bruce Willis at 58 does look like a concrete pillar who might be able to brush himself off and saunter away after being hit by an SUV as is John McClane's wont in the Die Hard series. Sadly, at 53 or thereabouts, Sanju has failed to maintain himself like, say, his amazingly trim contemporary Anil Kapoor. Ergo, he no longer has that.

For proof that this mindless madness can actually work, look no further than the Tamil film of which Policegiri is a remake. Saamy starred that powerhouse of talent Vikram. Now, to see the best of this National Award-winning star, you need to watch the likes of Sethu, Pithamagan and perhaps even Anniyan. Vikram has proved his mettle in a different way in films like Saamy that emerge from the genre of the ridiculous. Despite the ludicrousness of the proceedings around him, despite all the sound and fury, he still managed to pull it off.

In Policegiri, the cheer-worthiness is contributed not by the hero and his bombastic dialogues, but by another southern Indian actor. National Award winner Prakash Raj – familiar to Hindi film audiences from Wanted and Singham – plays Policegiri’s Nagori Subramaniam, underworld don and “PM, politician maker”. Whether he’s matching words and swords with DCP Rudra or lapping up praise from servile politicians for his hopeless performances on all sorts of musical instruments or silencing them with his dialoguebaazi, Prakash Raj manages to lend vigour and humour to the bombast that has now become a habit with him. Call it repetitive if you will, but he’s still fun to watch.

In fact, it’s Rudra’s scenes without Nagori that are unbearable. When Rudra tells Seher that he’d like to do “overtime” in bed with her, it’s hard not to shudder. When he’s not repeatedly describing himself as “born in Mumbai, brought up in India” and a “two-in-one… combo” of goonda and cop, he gets to say aspiring-to-be-chilling stuff like “public ko ehsaas dilaao ki hum unke bhai hai, goondon ko ehsaas dilaao ki hum unke baap hai”. And then there’s a strange exchange with Seher right after he requests her for more sex. She says something like: Aapki age ko mileage ho gayee (whatever that means, it’s exactly what I was thinking). Which is followed up by Rudra inexplicably saying: Pyaar umar nahin kamar dekhta hai (while prudently hiding his own kamar under the sheets). Err… The only thing weirder in this film is Rajpal Yadav’s character challenging Rudra to fight him over Seher. Or Rajpal again yelling out something that sounded to me like: Leave my red rose you bloody bullies, otherwise your blood will flow in all the galis. I rest my case.

Posted by Anna MM Vetticad at 3:18 AM