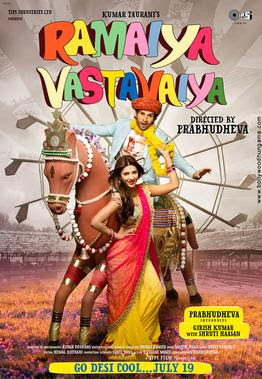 At one point in Ramaiya Vastavaiya, a man hiding in a bush gets urinated upon by another guy. This scene comes not long after one character gets hit in the crotch by a hard object and the hero of the film has been urinated upon by a cow when he tries to milk it. Ram (that’s the boy’s name) also steps on dung during the course of the film, falls flat on his face in a dung heap, has his bottom butted by a goat, watches a row of cattle in a shed shit in sync and lifts up the tail of one animal to spray perfume on its anus since he’s sleeping next it.

All this happens while he tries to win a challenge thrown at him by his lady love Sona’s brother. Bhaiyya says that spoilt rich NRI kid’s love for sis is shallow and will not be able to withstand the agricultural experience. Kid says, test me. Bhaiyya says, cultivate the land and if you can produce more grain than I do in one season, you can have my sis. Kid says, deal! Of course Sona doesn’t have a say in all this though she is – for reasons that no running time can possibly explain – actually in love with the charmless guy.

Ramaiya Vastavaiya is such a dated and formulaic film that it begs the question: why was it made? Answer: it’s been made to launch Girish Kumar Taurani, son of producer Kumar Taurani who owns Tips Industries. I hate to be discouraging when the subject is a young person, but sometimes the kindest thing you can do is to say it straight: Girish is not cut out for this. He can’t act so he over-acts. He can’t convincingly play innocent, cute or boisterous, so his Ram ends up behaving like an irritating buffoon (which might explain why Sona calls him a bandar and a gorilla at their early meetings). Since everyone in Bollywood does it these days, he takes off his shirt at one point. And while I can’t find anything particularly wrong with his dancing, its lack of extraordinariness is highlighted by the sight of Shruti Haasan – graceful and so evidently rooted in classical traditions – moving to the same songs.

Sonu Sood plays the over-protective brother Raghuvir to Shruti’s Sona. All he wants for his sister is a simple husband who will keep her happy in their village, but Sona meets Ram at her best friend’s wedding and falls in love. That’s when the stupid  challenge comes up to occupy the entire second half of the film. Sonu manages to retain his dignity despite the ludicrousness of the goings-on around him, but many members of the supporting cast – especially veteran southern Indian actor Nassar and the usually reliable Hindi character artiste Zakir Hussain – embarrass themselves and us with their hamming. Poonam Dhillon owes it to herself not to accept such bad films, and Prabhudeva must explain why he roped in a fine actor like Vinod Khanna to hang around the leads and do next to nothing.

Ramaiya Vastavaiya is a remake of the Telugu hit Nuvvostanante Nenoddantana with which Prabhudeva made his directorial debut. The storyline is the same but that film had two genuine actors – Siddharth Narayan and Trisha Krishnan – as the leads. The Hindi version has Girish who doesn’t possess a single acting cell in his being and Shruti who, though miles ahead of him, still has some way to go in that department. To make matters worse, the film is filled with a ton of clichéd characters and trite situations that Bollywood simply refuses to bury… So, for instance, the rich boy’s mother (Poonam Dhillon) is positioned as a bitch who is nasty to her husband (Randhir Kapoor) whereas the said husband is projected as cool because he hits on women quarter his age and encourages his son to be a flirt. At one point when a heartbroken Ram is brooding over his love, Prabhudeva and Jacqueline Fernandez materialise from nowhere to dance vigorously to a song in the fields. Sona’s most prized possession is a clay horse gifted to her by her brother and Ram risks his life to keep it safe. Even Jeene laga hoon in Aatif Aslam’s voice, which sounds lovely as a standalone song, loses half its sheen when you hear it in this silly film.

In the midst of all this nonsense, a pleasantly surprising bit of progressiveness… Despite the way the storyline goes, not a single character brings up that horridly regressive term “ghar jamaai”, and no one sneers at Ram for moving to Sona’s village. But that’s a rare bright spot in this otherwise dreary film. In a moment of blinding candour, at one point a character says to Ram: “Tumhe lagta hai na ki yeh kitne puraane ghise-pitey khayalat hai?” He should have said “ghisa-pita film”!

What else? Oh ya, there’s a villain, a fight and a mangalsutra in the climax that I won’t tell you about in case you do venture out to watch Ramaiya Vastavaiya. Personally, if I could sue for the over two hours of my life lost to this film, I would.