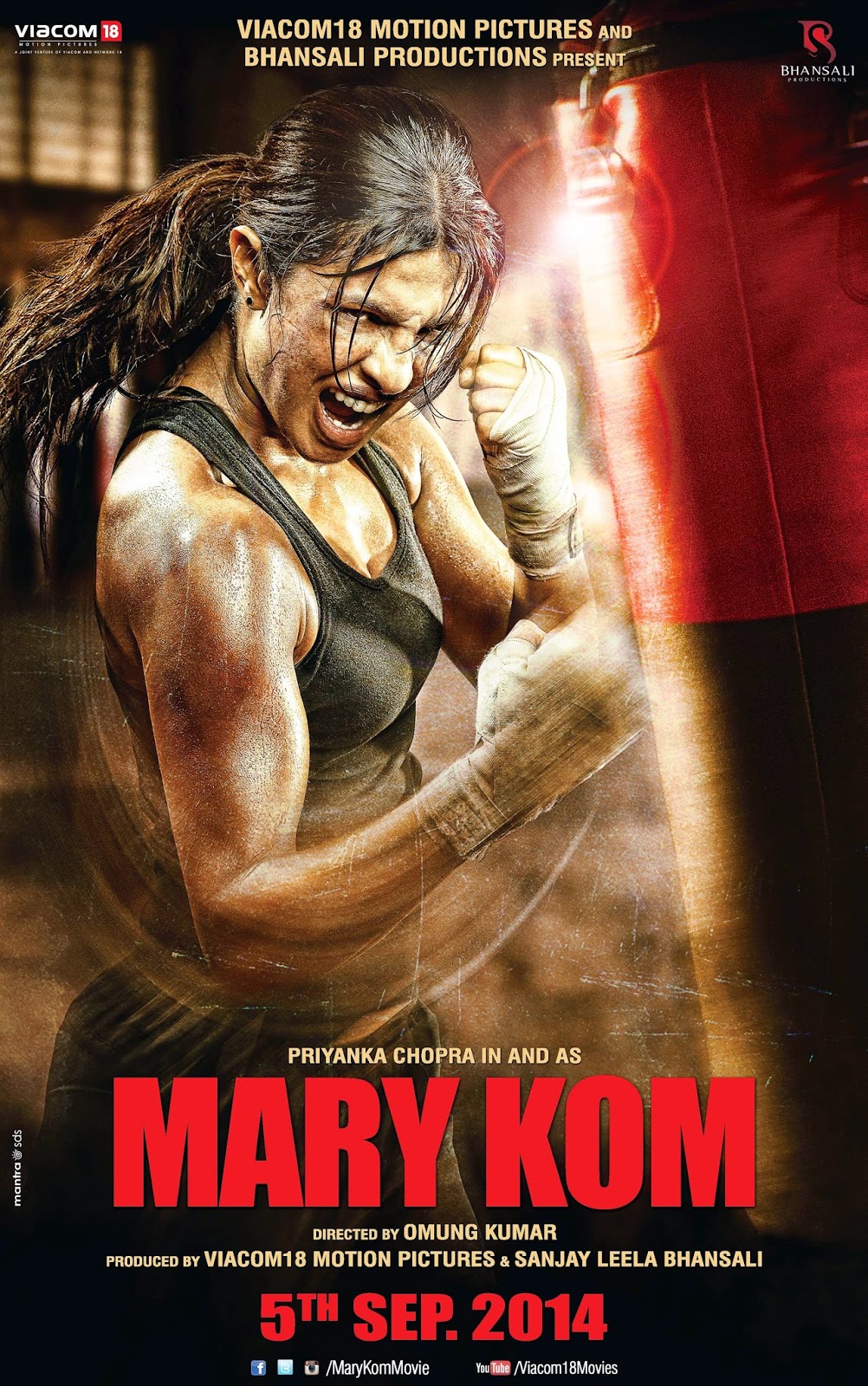 I have to confess to a certain degree of incredulousness while watching Mary Kom. Really? A husband so supportive that he takes care of the babies, motivates his wife and voluntarily puts his own career on the backburner to support hers? Do they make ’em like that?

Now having read reams on the five-time world boxing champion and Olympic medallist M.C. Mary Kom – on whose life this film is based – I’ve discovered that debutant director Omung Kumar and screenplay writer Saiwyn Quadras have been pretty faithful to her true story. In an interview to Good Housekeeping magazine in 2012, Mary had said: “He knows my dreams and is always encouraging me to go out and achieve them.” Onler, who reportedly left a full-time job in Customs and Central Excise to support her, added, “When we decided to get married, it wasn’t just to be man and wife. The promise was to be on her side always.”

This then is what this film is for me: the story of a gutsy woman who never gives up a fight, a feisty woman who is unapologetic about her ambitions, and her great partnership with an unconventional man unfazed by the standard gossip directed at husbands of successful women.

Mary Kom is an unusual sports biopic because it is, for the most part, shorn of contrived melodrama. Since the real Mary is an active boxer who is very much in the news, many viewers already know the outcome of most of the matches being portrayed on screen. The focus then is not on boxing but on the woman who enters that ring.

Contrary to what you might be expecting, this film is not designed as a grand epic set against the backdrop of insurgency in Manipur. Nor is this a masala film made along the lines of Bhaag Milkha Bhaag. It is, instead, a saga of the daily struggles that a woman professional in particular must deal with. It is about gender prejudice, politics in India’s sporting establishment, a couple who are best buddies and the everyday tensions faced by parents. It is about a woman torn between the emotional and practical pulls of motherhood and her passion for her sport. It is about rising from humble circumstances yet it does not exaggerate Mary’s poverty, although extreme scenarios are often deemed more commercially viable than regular stories.

The effort to tell Mary’s story at a very personal level is commendable, but leads to a major flaw in the screenplay: it tells us nothing of the challenges faced by ordinary persons in the politically turbulent – and ignored – North-east, except for a wish for peace made in passing by Mary’s dad. Elsewhere, Mary’s sudden outburst that sports officials are discriminating against her because she is Manipuri is incongruous, because there’s not a whimper about such bias before that scene or after. Quadras even makes the odd choice of leaving out of the film a huge tragedy in Mary’s life: the murder of her father-in-law by unidentified gunmen that almost drove her to give up boxing, as she told The Hindustan Times in December 2013.

Some of the film’s dialogues required greater writing clarity. Mary Kom is also pulled down by the volume at which its passable songs are played. These loud numbers – particularly the irritating Hai tujhe salaam India – diminish an otherwise relatively understated narrative.

While the tone of the writing remains consistent almost throughout, there is an unnecessary effort to whip up emotions and suspense during an overly-dramatised scene in which Mary fights an international match just moments after having received bad news involving her family. Mary in real life did in fact face such a situation, but not in the same time frame.

The big picture though is that there is more to praise than slam in this film. Right on top of the heap of positives is Priyanka Chopra’s performance as Mary Kom. No, she is not Manipuri and does not look it either. This casting decision is not evidence of racism in Bollywood though (as has been alleged by some) but a sign of the star-ridden system that enslaves the industry, where even big film makers struggle to notch up a hit without stars and therefore avoid taking risks.

This situation needs to change. For the moment though, it’s a relief that Priyanka doesn’t overdo Mary’s mannerisms and reduce her to a caricature. PC throws herself into the role with the kind of commitment we saw from her in Barfi! At no point does she look like a boxing novice, and her body language – loose-limbed and excitable – matches her character’s temperament.

Interestingly, the writer does not deify Mary. Her excitability often translates into irritability and though she’s a good soul, I occasionally found myself admiring Onler’s patience with her. Playing Onler is film debutant Darshan Kumaar who is an absolute natural and a delight on camera. Of the excellent supporting cast, Sunil Thapa as Mary’s coach is particularly nice.

Press reports tell us the film has not been shot in Manipur. That’s unfortunate. The locations are pretty though, and cinematographer Keiko Nakahara has fun with them especially during an extended training sequence in the great outdoors. For the most part though, she keeps the scale of her camerawork more intimate, to match the mood of the film.

In the overall analysis then, Mary Kom is a neat little biopic. It is inspiring because Mary is a fighter in every sense of the word, and her marriage is a partnership of equals. It is unusual because the director and writer do not allow Mary’s motherhood to dwarf other aspects of her identity, and even when Mary is in pain over her kids, she is never shown feeling guilty about being a career woman.

Despite some major grouses with the film, I’ve come away from the theatre admiring Mary Kom and being a little in love with Onler. Mission accomplished, Omung Kumar.