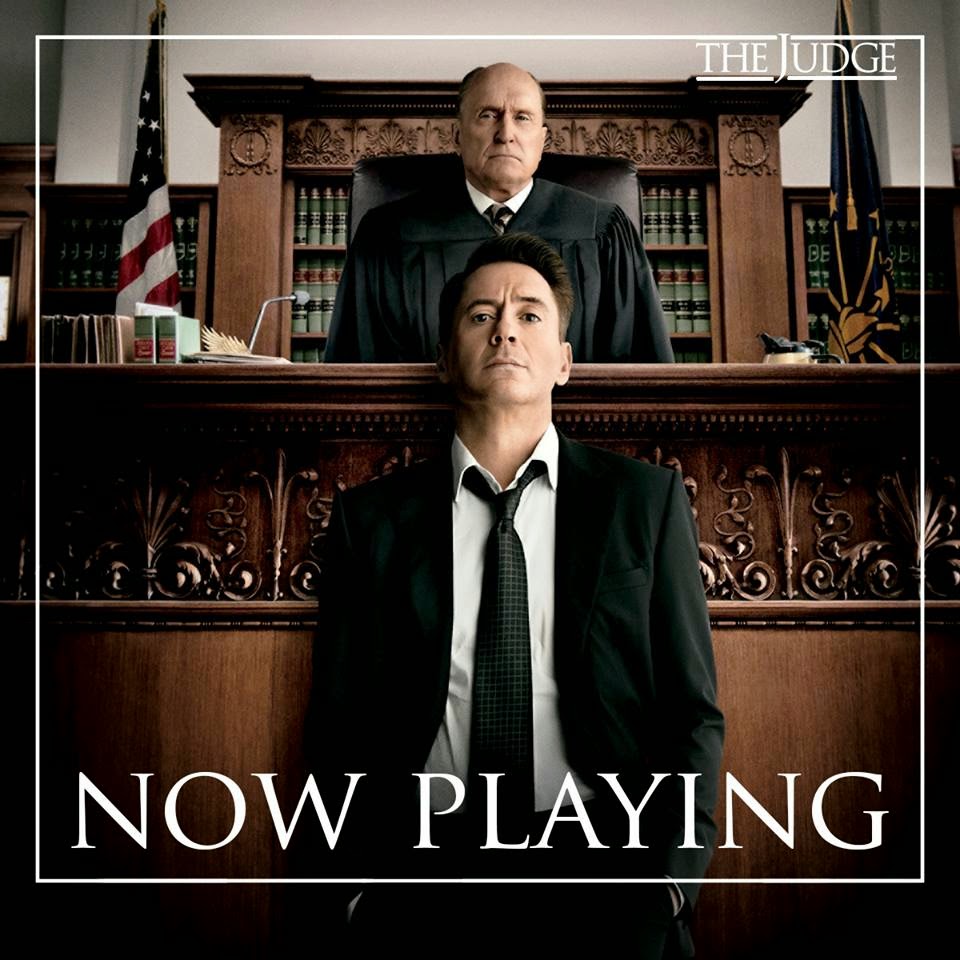 The Judge is not the most earth-shatteringly original film. What is impossible to ignore though is the heavyweight cast, from the two Roberts playing an estranged father and son, to every single supporting player. For them and them alone, this would be a film worth seeing.

To be fair though, there is more to it than just the assembly of awe-inspiring actors. The Judge is the story of the successful, high-flying big-city lawyer Henry/Hank Palmer and his dad, the imperious small-town judge Joseph Palmer. When Henry’s beloved mother passes away, his return back home for her funeral brings the long-dormant father-son animosity to the surface.

Where the film focuses on the relationship between Henry and Joseph, Henry and his ex-girlfriend Samantha Powell (Vera Farmiga), Henry and his brothers – the former baseball star Glen (Vincent D’Onofrio) and the mentally slow, camera-obsessed Dale (Jeremy Strong) – it is on solid ground. Each of these actors possesses a certain quiet dignity that does not betray them even in their characters’ more over-wrought moments. Where The Judge falters is in its effort to throw too much into the mix, with the primary element of strained family ties stirred up with the ravages of old age, a crime thriller aspect, courtroom drama, romance and other bits and bobs.

Some of it seems familiar and none of it is outstandingly unusual, which is why The Judge falls far short of being a remarkable film. It is however, never short of being good.

Watching the legendary Robert Duvall and the always-excellent Robert Downey Jr play off each other as Joseph and Henry is a bit like watching Meryl Streep and Julia Roberts share screen space as the mother-daughter duo Violet and Barbara in their Oscar-nominated performances in last year’s August: Osage County – there is such joy in seeing two generations of great actors in the same frame. That being said, the Palmers are nowhere near as dysfunctional as Violet’s crazy clan. The Judge is less about screaming confrontations and more about things left unsaid, about rage left simmering below the surface until it threatens to destroy treasured bonds.

Comparisons are inevitable too between The Judge and last year’s deservedly multiple-Oscar-nominated Nebraska. Watching Henry and Joseph rediscover each other is no doubt a reminder of David (Will Forte) rediscovering his declining father Woody (Bruce Dern) in that film. The screenplay of The Judge though pales in comparison with the genius of Bob Nelson’s writing for Nebraska, which packed understated, heart-wrenching emotion into every single second of its filmic existence. The Judge is nowhere within touching distance of Nebraska.

However, there is much to recommend The Judge too. Foremost among its strengths is the fact that unlike many prodigal-son-returns-to-the-small-town tales, this one does not feature a single character who seems to regret their backwaters existence. Samantha Powell in particular is the exact opposite, the one who discovered early on that this is where she belongs, in the process turning out to be much more than Henry clearly ever thought anyone could be in his hometown.

Sans too many grand flourishes, DoP Janusz Kaminski seems to revel as much in showing us the picturesque Indiana countryside as he does in unintrusively capturing that tear that struggles not to escape Henry’s eye. It’s been a while since we’ve seen Downey in a film in which he is not a high-strung Sherlock Holmes or a maverick millionaire with superpowers. The Judge is the best showcase for this endearing actor’s ability to play a regular guy since the lovely Zodiac in 2007.

The pairing of the two Roberts is of course the selling point of the film. They are backed here by an intimidatingly talented supporting cast. Vera Farmiga’s luminous presence is hard to miss even in the small role of Samantha. The wonderful Vincent D’Onofrio brings to the part of Glen Palmer a brooding intensity that is familiar to Indian viewers who have seen him play the male lead in the beautifully written and acted police drama Law and Order: Criminal Intent. Fluff TV junkies would perhaps be pleased too to spot Leighton Meester in a tiny but impactful role as Samantha’s daughter Carla, far removed from the sheen and glamour of her calling card – the big-city rich kid Blair Waldorf that she played in the irritatingly frivolous Gossip Girl.

The actors do not though overshadow the film’s other strength: those moments of intimacy when you are least expecting them. Watching Henry repeatedly struggle not to break down, seeing the father and son tide over an awkward bathroom accident with a shared chuckle, that brief instant in their darkened home when Glen quietly observes the two rip the covers off their anger against each other… as much as the powerful cast, these are what make The Judge worth our time, warts and all.