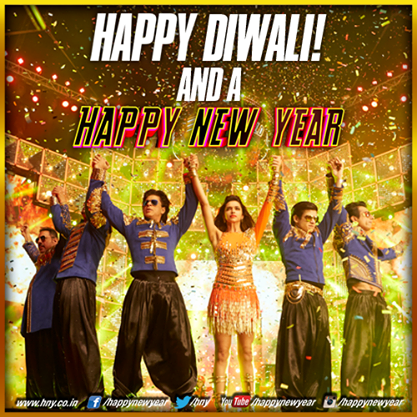 ‘Narendra Modi’ makes a guest appearance in Happy New Year. Those few seconds, to my mind, exemplify director Farah Khan’s signature: cheeky, many things to many people, designed to attract attention, and definitely not – that word most people, including many of her fans, mindlessly use to describe her cinema – mindless.

The cleverness of that passing scene lies in the fact that a Modi bhakt may well interpret it as mainstream Bollywood’s flattering acknowledgement of their idol’s unmissable presence in the country’s news landscape, whereas a diehard Modi critic could see it as an oblique message about his penchant for appropriating anything and everything that can be seen as a national occasion. Methinks there’s nothing mindless about a film that can achieve that fine balance.

In short, Happy New Year (HNY) serves up some good ol’ Farah Khan-style entertainment. As with their earlier films together, this one too is designed as a platform for every aspect of Shah Rukh Khan’s larger-than-life screen persona: he headlines the story, sings, dances, beats up bad guys, gets beaten up with a purpose, romances a beautiful woman, makes us laugh and cry.

The effectiveness of this Khan & Khan combination is the best evidence of that thing called director-actor chemistry. The same Farah who hit the bull’s eye with the laughathons Main Hoon Naa (2004) and Om Shanti Om (2007) – both Shah Rukh-starrers – also helmed that damp squib Tees Maar Khan starring Akshay Kumar in 2010. HNY is fun if you do not mind the loudness (in tone, colour and decibels), the high-strung nature of its emotions and the manner in which it unabashedly manipulates our tear ducts. For a while post-interval the film slows down, but it picks up again and then there's no looking back. One caveat though…

HNY is the story of Charlie (SRK) who puts together a motley bunch of seeming regular Joes to steal a cache of diamonds. Because we Indiawaale are like this wonly, a lust for moolah can’t be their sole motivation. And so each one has a maa/baap/parivaar/dosti/izzat-related back-story spurring them on. Charlie’s Angels are, in order of appearance: Captain Jagmohan Prakash (Sonu Sood), Tammy Irani (Boman Irani), Rohan Singh (Vivaan Shah), Nandu Bhide (Abhishek Bachchan) and Mohini Joshi (Deepika Padukone). The gang need to get to the finals of the World Dance Championship in Dubai to get a shot at stealing the precious stones.

Political correctness for appearances’ sake has never been Farah’s goal. That’s not a bad thing if you know how not to cross the line from irreverence to downright crudeness. Those who love the American TV shows Two Broke Girls and The Big Bang Theory as much as I do will know what I mean. HNY inoffensively stereotypes and/or pokes fun at Parsis, Malayalis, Koreans, older people, non-English-speakers, gays and other groups with disarming equitability of impudence.

Hats off to Farah, her co-writers Althea Kaushal and Mayur Puri for zeroing in on a man’s illiteracy as a source of wit without being hurtful (watch Nandu giving autographs to his fans). As soon as we are told that Tammy gets fits, I began worrying that this would lead to a mockery of his ailment because, well sadly, that’s what Bollywood tends to do. Instead, HNY draws on his illness to deliver a moving example of teamwork when I was least expecting it.

In every other instance, when a character has a weakness, we are invited to laugh with the person not at them. In contrast, the treatment of Mohini is jarring. Her style of speaking is hilarious, her soft corner for English is a hoot, but the writers are highly insensitive in the position they take on a woman driven by poverty to dance at bars before lascivious men. Charlie’s contempt for her is cringe-worthy (at one point he even calls her “breast-taking” instead of “breathtaking”! eww!); he does not regret his misogyny (towards Mohini) and his classism (towards Nandu and Mohini) or apologise for being a pig (I guess a Hindi film hero can’t be shown deigning to say sorry to a mere woman); and it’s inexplicable that we’re supposed to see his redemption – as she does – in his kindness to someone else. Are we to forget his obnoxiousness – as she does – because he does her the favour of falling in love with her? Worse than his attitude is the fact that this behaviour towards Mohini is out of character for the otherwise likeable Charlie. A pity that the only downright offensive ‘humour’ in HNY comes from lazy writing.

The discomfiting Charlie-Mohini equation is not the only disappointment regarding the heroine. Deepika looks stunning, dances like a dream and is captivating in every frame she gets, but the problem is, she doesn’t get that many frames. She makes her first appearance about 55 minutes into the film, and then too she is given far less to do than you might expect for a woman emerging from a year in which she played characters standing shoulder to shoulder with her heroes in Yeh Jawaani Hai Deewani, Chennai Express and Ram-leela. It is a measure of Deepika’s charisma and talent that she displays her versatility even in this limited role.

The Shah Rukh we see in HNY is not the Shah Rukh of his stage years, the natural actor who peeped out in Chak De! India, Swades or even My Name Is Khan. Here we get SRK with all the quirky mannerisms that seem to floor his fans, and in that avatar he comes out all guns blazing. That’s disappointing, but inescapable I guess in a film like this. Wish SRK would realise though that he is nice and dignified with a beard in the first part of the film; a look far better suited to his age than the pancake-coated, smooth-faced boy-man appearance of the second half.

The supporting actors are all effective in their roles, though the most interesting performance comes from Abhishek Bachchan whose comic timing is fast becoming his USP. Sonu Sood looks hot, and it is interesting to see the female gaze on him and Shah Rukh. Sonu’s bare body in particular is displayed to us with a sense of humour that matches Abhinav Kashyap’s touch in Dabangg. Those who take a simplistic view of human objectification should see the manner in which Farah’s eye and cinematographer Manush Nandan’s camera embrace the bodies of the two men and Deepika in this film; then contrast it with the leering scrutiny of, for instance, every nook and cranny on Mallika Sherawat’s body in the ‘item song’ Jalebi bai in Double Dhamaal.

Vishal-Shekhar’s music for HNY is unremarkable when heard outside the film, but the songs fit well into the narrative and manage to press all the buttons they’re clearly meant to press in the departments of humour, romance and flag-waving, chest-thumping, emotion-inducing patriotism.

Team Farah-Shah Rukh are capable of much better in the over-the-top genre that they favour together. Happy New Year is a step down from Om Shanti Om, but if you enjoy boisterous entertainment that is still not entirely mindless, it’s worth a visit.

What works for HNY is that it is unrelentingly unapologetic about everything it does, including a product placement that is rubbed in our faces (same brand that Chennai Express endorsed), almost as if it is spoofing the very concept of product placements while also making money from it. This impertinence is what makes HNY entertaining. In spite of all my misgivings, I enjoyed it.

Posted by Anna MM Vetticad at 9:41 AM