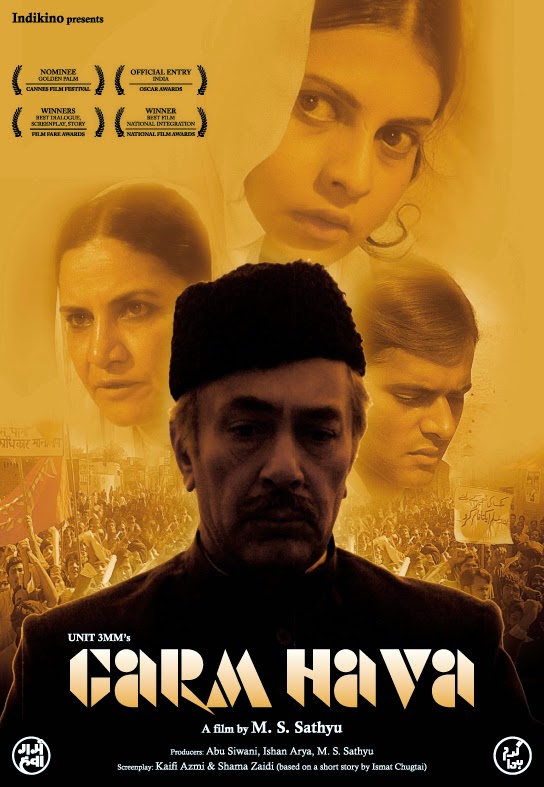 Great news for film buffs, secularists and all those who believe in basic human decency.

M.S. Sathyu’s Garm Hava (also spelt as Garam Hawa or Garm Hawa) has been digitally restored and will be re-released in theatres on November 14, 2014, by PVR Director’s Rare, according to an official announcement today. A note issued to the press confirms that the re-released Garm Hava will be in theatres in Mumbai, Delhi, Bangalore, Chennai, Pune and Ahmedabad.

The timing may be coincidental, but it’s impossible not to note that over four decades after Sathyu’s Partition-era drama was made, the theme of communal strife still remains scorchingly relevant to the Indian political and social reality.

Listen to these words in the trailer I’m posting below this article: “Gita ki koi sunta na Koran ki sunta / Hairaan sa imaan, vahaa bhi thha,  yahaan bhi” and “Jo bhaage hai, unki sazaa unhe kyun di jaaye jo na bhaage hai aur na bhaagna chahte hai?” It’s almost as if Sathyu, Ismat Chugtai (on whose short story the film is based) and Kaifi Azmi (who adapted it for the screen along with Shama Zaidi) made this film after reading this morning’s newspapers in 2014.

Film addicts need no introduction to Garm Hava, but for youngsters who do, here’s some additional information. Sathyu’s classic is about a Muslim householder in Partitition-time India, torn apart by the dilemma of whether to stay on in the homeland he loves or move to the newly formed country supposedly created in the interests of his people. It is a moving, heart-rending, painfully real story played out on screen by a brilliant cast including the legendary Balraj Sahni at his best.

It’s the sort of film today’s children should be seeing even as they are bombarded from all sides by propaganda from divisive communal forces. In short, it is beautiful.

The press statement on the re-release quotes Sathyu as saying, “Garm Hava tells a tale of troubled times when Partition ran family-deep. Showcasing this film to people today will help bring about an empathetic connection with those who suffered the plight of Partition.”