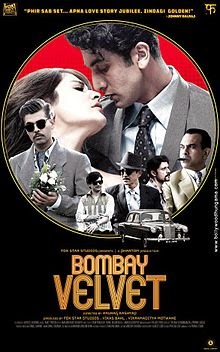 The setting is Mumbai, the team is Indian, but this is not an Indian film.

Bombay Velvet is a film that’s trying to be American or something like it; a film in which Kashyap, it would appear, is trying to be someone else.

Tum acchha gaati ho par Geeta Dutt ko copy karti ho, a character tells singer Rosie Noronha (Anushka Sharma) at one point in the film, inadvertently articulating what turns out to be the fundamental problem with Bombay Velvet too.

Kashyap reveals up-front that his film is a bow to early-20th-century Hollywood gangster flicks through an early scene in which buddies Johnny Balraj (Ranbir Kapoor) and Chiman Chopra (Satyadeep Misra) are seen watching the American classic The Roaring Twenties. Johnny is fascinated with that 1939 hit’s iconic climax in which Gladys George cradles the lifeless body of James Cagney in her arms and tells a policeman: “He used to be a big shot.”

It’s a film and a genre worthy of a bow. There’s a difference though between a tribute and a loss of one’s own identity as a filmmaker. Bombay Velvet is not rooted anywhere and ends up like the proverbial dhobi’s dog so frequently referenced by the Hindi language – na ghar ka na ghat ka.

The title of the film comes from a glitzy nightclub in the city owned by businessman Kaizad Khambatta (Karan Johar), proprietor of the tabloid Torrent. It is erected a little over two decades after the Partition brought two young refugees – Balraj from Sialkot (later to become Johnny Balraj) and  Chiman from Multan – to Mumbai. Both boys take to petty crime. When they grow up, Johnny also becomes a streetfighter.

To cash in on the building boom of the 1960s, Kaizad gets Johnny to set up Bombay Velvet. The goal is to make it a sought-after destination among the city’s elite, giving Kaizad a chance to rub shoulders with them and thus an advantage in bidding for lucrative contracts. Kaizad’s bete noir is Jimmy Mistry (Manish Chaudhary) who owns the rival newspaper Glitz, no doubt modelled on Russi Karanjia’s Blitz. Mistry sends Rosie to spy on Kaizad by getting involved with Johnny. What follows is a tale of political intrigue, greed, extreme violence, betrayal, hatred and love.

If looks could make a film, then Bombay Velvet is well off the starting block. The period feel is consistent in terms of production design and the styling of the characters. It is also interesting to see Mumbai as it looked before the birth of most of the film’s audience. Rajeev Ravi’s cinematography presents the city to us in opulent, warm tones that fill the artificial bonhomie of evenings at the nightclub, to be contrasted with the steely gray of the real world in the daytime. Niharika Khan dresses Anushka in luscious gowns for her avatar as the singer who is Bombay Velvet’s star attraction.

Sadly, the efficiency of these departments underlines the lack of soul and heft in the story. It is based on the acclaimed book Mumbai Fables by Gyan Prakash who is also one of the film’s co-writers. Calling Bombay Velvet flimsily written and lifeless is an understatement. It’s meant to be a thriller but the suspense is poorly handled. Where is the fire ‘n’ brimstone and depth for which we know Kashyap? Answer: not here.

Kapoor has more charisma in his index finger than most people have in their entire beings. He immerses himself in the role to deliver a convincing, layered performance, but cannot save this cold, sterile, garbled film. The leading man is well-matched by the under-rated Misra. Sharma, on the other hand, looks so detached almost throughout that it’s hard to believe hers is the same involved presence we got in PK and NH10. She seems bored. Can’t blame her.

Johar, appearing in his first full-fledged screen role here, tries hard to be intense as Kaizad, but ends up being unintentionally amusing. The one scene in which he is effective – desperately suppressing his contemptuous laughter for Johnny – works because he is just being himself there.

Why has one of Bollywood’s most commercially successful directors strayed out of his comfort zone to do this to himself? He mucks up some of the film’s more important lines, including one about Jinnah and what should have been an electric exchange through car windows between Kaizad and Jimmy. In a scene where Kaizad is contemplating Johnny through narrowed eyes, far from looking sly – an intent that the context suggests – he ends up appearing almost loving. Much later, we get an inadvertently comical moment with KJo’s delivery of a line that conveys heartbreak rather than the intended anger that again we derive from the context.

Amit Trivedi’s music should have been the centrepiece of Bombay Velvet. Instead, his songs are very very pretty but generic, which is a disappointment considering his unique trademark earthiness. On the other hand, there is the rich background score which is one of Bombay Velvet’s biggest pluses. The otherwise limpid screenplay throws up a pleasant surprise with its unusual mother character, far more realistic than the cliched devi of Hindi film tradition.

Since we live in an age of open letters, here’s one:

Please get back to being yourself. Please stick to the unapologetic voice with which you spoke through the writing of Satya and through your work as the director of Paanch, Black Friday, Return of Hanuman, your short film in Mumbai Cutting and Gangs of Wasseypur 1. If I want to watch a European or American film, I will watch a European or American film. I do not come to you for That Girl in Yellow Boots or Bombay Velvet. To you I come for films in which I can detect the distinct fragrance of the Indian soil. Jo baat aap mein hai – yeh zameen ki mehek – woh Martin Scorcese, Quentin Tarantino, Brian De Palma vagairah mein nahin. Jo baat unn mein hai, woh aap mein nahin. You are loved just the way you are. I demand the return of the real Anurag, not the guy who made this insubstantial film called Bombay Velvet.

With affectionate regards and continued respect,

Posted by Anna MM Vetticad at 8:35 AM