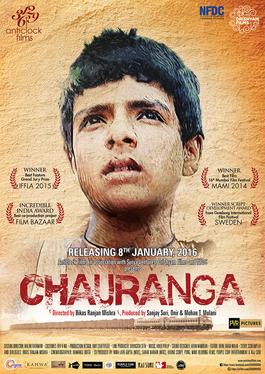 Writer-director Bikas Ranjan Mishra’s Chauranga is so low-key that it comes across as an unfeeling drama even though the screen is, at all times, busy with multiple pressing concerns.

This film’s lack of emotional pull is inexplicable at one level because the story covers issues that would tug at the heart of any individual with an iota of conscience and sensitivity. In a village in north India lives a little Dalit boy called Santu (Soham Maitra) who longs for an education. His elder brother Bajrangi (Riddhi Sen) is studying at a boarding school in the city. Santu, on the other hand, spends his days  gazing down from a treetop at a pretty girl (Ena Saha) passing by on her two-wheeler, on her way from school to home.

Santu is unmindful of the dangers of his crush on an upper-caste girl. Meanwhile, his mother Dhaniya (Tannishtha Chatterjee) is having a clandestine affair with the girl’s father, the local strongman Dhaval (Sanjay Suri).

Also in this potent mix written by Bikas are Dhaval’s hapless wife Nidhi (Arpita Pal Chatterjee), his clueless mother (Swatilekha Sengupta) and a creepy priest (Dhritiman Chatterjee) with a sexual penchant for little girls and beasts. The plot is crying out to be felt. The fact that it fails to move has to be attributed to Bikas’ direction and the central casting.

It is one thing to portray the casualness with which caste is practised, lived and accepted in this setting, but quite another to not flinch while doing so. When a couple of high-caste boys coolly throw a Dalit kid into a well to punish him for straying into a temple, it should have been a chilling moment. A man’s hand over a woman’s mouth while they have sex in a haystack, to prevent her orgasmic moans from reaching the world, is a brilliant metaphor for the gagging of women and Dalits. Yet, in both instances, the actors involved are expressionless to the point of being unnaturally so. It is as if the director instructed them to freeze their faces to convey depth.

There appears to be no other explanation for these performances because, for instance, we know that when he is at his best, Sanjay has the ability to pull at the heartstrings in a way that few others can. This, after all, is the man who played Nikhil in the pathbreaking, soul-stirring, soul-searching 2005 Hindi film My Brother Nikhil directed by Onir, his co-producer on Chauranga.

The casting of the female protagonist though is the film’s biggest mistake. Tannishtha may well be a regular on the festival circuit but the harsh truth is that she does not have a strong screen presence and there has been a tiring sameness to her performances in all her recent films. She has had the good fortune of bagging a string of strong roles in her career, but her idea of what some people might call minimalist acting is boring beyond a point. The last time I remember being genuinely moved by her on screen was over a decade back in Florian Gallenberger’s Bengali language German production Shadows of Time, and then too, now that I look back, I realise it was the powerful story and tragic role that got to me, not her performance.

In the case of Chauranga, the director also needs to explain why he has taken the trouble to cast the heroine of one of Satyajit Ray’s best-remembered films – Swatilekha Sengupta from Ghare Baire (1984) – and then squandered her away. For most of Chauranga, the veteran’s face remains in the shadows, and I found myself squinting at the screen to be sure that it was indeed her I was seeing and not someone who looks like her.

The only member of the cast who ekes some poignancy out of this lifeless film is Arpita as the suffering wife. As for the children, Riddhi as the older brother has evident potential, but who is to say for sure that the leading little man Soham does not? If the energy that the director achieves on screen in the last five minutes had permeated Chauranga in its entirety, perhaps the boy would have delivered something more than his sweet face.

At the end of the film, I found myself dying to know how Onir would have directed this film with a slightly tweaked cast. This is, after all, a story that desperately needs to be told. It just needs to be told better.


This review has also been published on firstpost:
http://www.firstpost.com/bollywood/chauranga-review-a-low-key-film-that-tells-a-story-that-needs-to-be-told-but-doesnt-tell-it-well-enough-2576338.html