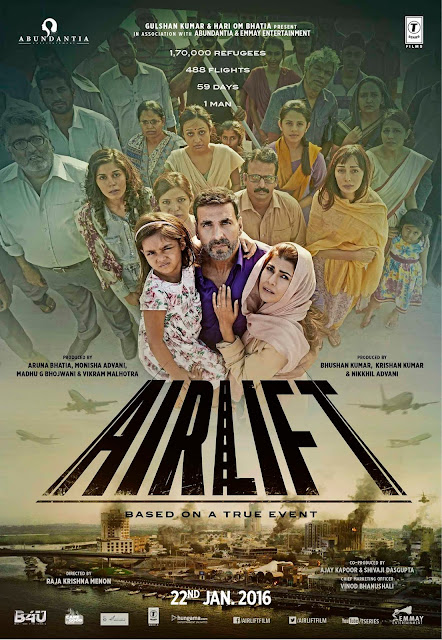 Airlift is Argo with a split personality, songs and questionable fidelity to facts.

Raja Krishna Menon’s film is loosely based on the true story of how Indians were evacuated from Kuwait after the Iraqi invasion in 1990. When the going is good, the film is very good, but it is intermittently confusing, as though two directors made it: the first one understood that this subject required realistic treatment slightly removed from the conventional Bollywood film; the second entered the picture after it was completed and spoilt the tone in places by adding loud songs, needlessly heightened the pitch of the romance between the hero and his wife, and ended with a splash of stretched-out, flag-waving patriotism.

These add-ons qualitatively diminish an otherwise well-handled film that is unusual on the Bollywood firmament, the sort rarely headlined by a star of Akshay Kumar’s stature in this industry. Our hypothetical Director 2 should have respected the audience’s intellect a little more.

Airlift draws on an episode in our history that most other countries would have tomtommed from the rooftops if it had been their success story. Not so in India where filmmakers dread touching recent history because of the national penchant for bans and violence towards creative works we disagree with. According to a 2014 report on scroll.in, after Saddam Hussein’s forces overran Kuwait in August 1990, the Indian government evacuated “more than 110,000 citizens from Iraq and Kuwait via an airlift that included nearly 500 flights. The operation is the largest civilian evacuation in history… Eventually, Air India would fly 488 flights over 59 days, carrying 111,711 passengers”. The film puts it at 1.7 lakh Indians in a joint operation between Air India, Indian Airlines and the Indian Air Force in coordination with – and this is the film’s big flaw – a single fictional Indian bureaucrat and a single fictional Kuwait-based Indian.

For the most part, Airlift is a focused, no-nonsense narrative. Imagine a life of wealth and comfort being destroyed in one day because a foreign army invades the foreign country you have chosen to call home. That’s what happens to Ranjit Katiyal (Akshay), a construction tycoon living with his wife Amrita (Nimrat Kaur) and little daughter in Kuwait when Saddam’s forces drive into the streets, bombing buildings and randomly firing their weapons.

We discover early on that money is Ranjit’s preferred language, that he views India with disdain and calls himself a Kuwaiti. He is not, however, a superficial or entirely cold-hearted character as a more formulaic writer might have made him out to be – he may be a tough-as-nails businessman who barely knows his company’s employees, but he dotes on Amrita and their kid and has a warm equation with his driver Nair. At some point, he becomes the moving force behind the effort to get all his fellow Indians out of Kuwait.

The dominant tone of Airlift is realistic, and that’s what makes it work. Ranjit and Amrita are believable characters. His transformation from a me-centric chap to a fellow caring for strangers does not come through a melodramatic turning point. We just witness a natural, convincing progression towards that person. Amrita’s initial cynicism about his newly discovered heroism could have been used to paint a stereotype of the wicked witch of the marital world, the evil wife holding back a golden-hearted man, but the film gives her too shades of grey.

Equally subtle is Airlift’s take on NRIs. They are not all Mr Bharats from the Manoj Kumar School of Hyper-Nationalism, nor are they exaggerated, hyper-westernised cardboard cut-outs of the kind Saira Banu played opposite him in Purab aur Pachhim (1970). These are real Indians, rich, poor and middle-class, that you will actually bump into in the Middle East.

Akshay delivers a controlled performance for the most part. When he does raise his pitch it is in those over-stated moments which are a departure from the film’s otherwise under-stated nature. Such as that song at the opening party or that scene in which Ranjit suddenly acquires a vintage Akshay Kumar swagger before breaking into Bhangra with a horde of desis on getting their first bit of good news about a possible evacuation.

Nimrat is excellent, keeping herself in check even when the director has Amrita gazing at Ranjit in loverly fashion while walking in slow motion with a lurve song playing in the background.

Compensation comes in the form of their on-screen compatibility and Akshay’s hotness in a beard. After SRK in Dilwale last month, it is such a pleasure once again to see a senior male star acknowledging his age with visible lines and gray hairs showing on his face. Akshay in Airlift even briefly takes off his shirt to uncharacteristically reveal a thick mop on his chest – and whaddyaknow, it’s salt ‘n’ pepper. There is a time and a place and a certain kind of film for flashing muscles and a smooth, nicely shaven chest; this film is not that place.

Mind you, Akshay is still acting with a woman 15 years his junior, but going by Bollywood’s standards of sexist ageism, it is a small mercy that that figure is not 20 or 25. Equally a relief is that this fantastic actress from The Lunchbox has not been relegated to the sidelines as Akshay’s heroines usually are. Nimrat’s is certainly not an equal role to his (when will that day come, Mr Kumar?) but it is substantial and significant.

In a film filled with interesting satellite actors and interesting characters, Inaamulhaq sticks out like a sore thumb playing an Iraqi major. This is an artiste who was so memorable as a Pakistani smuggler of pirated Hindi film CDs in 2014’s Filmistaan. In Airlift though, his character is one-dimensional, his acting caricaturish.

The stand-out performance among the supporting cast comes from Purab Kohli as Ibrahim, a man desperate to find the bride he lost in the melee of the war. He is restrained, intense, likeable and – this I have not thought of him so far – sexy. What is it with some men and beards?

Kumud Mishra too leaves a lasting impression as Sanjeev Kohli, an initially indifferent Joint Secretary in the Ministry of External Affairs who later becomes Ranjit’s greatest ally in India.

The treatment of characters like Kohli is Airlift’s strength – the film’s babus and refugees are at no point tarred with one brush, either as saints or simpering idiots or satan.

Airlift is somewhat ungracious though towards the actual characters in the real-life drama that took place in 1990. The then Foreign Minister in the United Front government, I.K. Gujral, had received a lot of flak for a meeting he held with Saddam after the invasion of Kuwait which culminated in that now infamous photograph of a hug between the two leaders. Politics and diplomacy are always tricky ground and while Saddam’s actions were no doubt condemnable, the fact is that Gujral’s visit paved the way for the evacuation detailed in Airlift. The film, however, shows a minister involved expressing helplessness due to his government’s instability. This injustice to the Central Government of the time is inexplicable.

There is also the question of why Airlift does not model its protagonist/s specifically on one of the actual people in that entire episode. Those mentioned in various articles include M.P. Mascarenhas described by scroll.in as the person who “organised the operation, as the airline’s (Air India’s) regional director in the Gulf & Middle East”. The text on screen at the end of the film mentions a couple of individuals involved, namely a “Mathunny Matthews” and a “Vedi” (that’s right, not even the courtesy of a full name given) without explaining who they were or what exactly they did at the time. Why create a fiction when you could bow to real-life heroes? Why conjure up a name if theirs could have been used? Could it be because a Ranjit Katiyal is who Akshay can play; or because the normative Indian in Bollywood’s eyes is a dashing, upper-class, upper-caste, Punjabi Hindu male, the rest – women included – being exceptions?

This would have been a better film if it had been fairer to the people whose story it was telling.

Still, with all its flaws, Airlift is head and shoulders, eyebrows and hairline above the last film in which Akshay ventured into India’s foreign affairs, the amateurishly written Baby. This one manages to build up a sense of urgency around the evacuation effort, gets us to feel for its characters and reminds us that the worst of times can bring out the best in ordinary folk. It would be great to see Akshay backing more films like Airlift and Special 26 (2013). This is the best that he has ever been.

Rating (out of five): **3/4
This review has also been published on Firstpost: