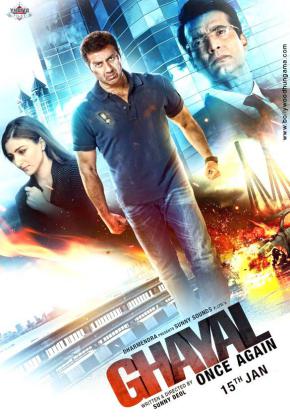 Ghayal Once Again marks the return of Sunny Deol as one of the best-remembered characters he has ever played on screen. Ajay Mehra from 1990’s Ghayal, directed by Rajkumar Santoshi, preceded the signature “dhai kilo ka haath” Sunny held up in court as a lawyer in Santoshi’s Damini (1993). These two films gave the actor the two National Awards of his career and were a source of much viewing pleasure, even to some among us with increasing reservations about flaring nostrils, red eyes and yelling in the midst of flying fists.

The sequel to Ghayal – directed by Sunny himself – seems to be the star’s effort to do a balancing act between an emerging audience with changing tastes and his own traditional following. It works for a considerable part of the film; but after a while it is neither here nor there and it all goes downhill.

The hero himself enters the frame 15 minutes into the proceedings, in a scene that is surprisingly low key in comparison with the many grand entries Sunny has made on screen in the past. When it is hinging itself on action alone, Ghayal 2 is effective, even when you cannot but be aware of the improbability of it all.

Sure there is silliness along the way, plenty of over-the-top action too, but it is nothing that we have not willingly swallowed in the past from Hollywood action adventures such as the MI, Die Hard, Indiana Jones and Bond series, all of which demand a suspension of disbelief from viewers. Admittedly too, there are spots of tackiness elsewhere, especially when the writers are trying too hard to be youthful and cool (such as a completely superfluous song and dance sequence involving the four kids at the centre of this story, or another where they hang out with the grandfather of one of them). Yet, not counting the needlessly extended ending where schmaltz is injected into what should have been some good old-fashioned, absurdly unapologetic dishum-dishum, Ghayal Once Again’s stunt sequences are fun.

In Ghayal, Ajay went on a rampage to execute a treacherous villain (Amrish Puri) for preying on his businessman brother (Raj Babbar). After the events of that film, he spent 14 years in jail and on his return, has been running a corruption-hunting media platform called Satyakam with the support of good-hearted souls he met in prison and a wide underground network of concerned citizens. The pivotal plot point of Ghayal 2 emerges when four students unknowingly shoot a video of a crime being committed by a powerful individual and decide to hand it over to Ajay.

The opening quarter hour of the film, which includes black-and-white flashbacks to the previous one, are deceptively calm. The chases that follow are nail-bitingly suspenseful, even though it makes no sense that not a single soul stops to help the children or Ajay, despite the latter’s evident popularity among the public. Besides, when blood-thirsty goons go on a rampage in a Mumbai mall, how on earth, in this day and age does it come about that not a single eye-witness manages to clandestinely shoot their violence and upload it somewhere?

No doubt police, politicians and a pliant or scared media have in real life colluded to cover up crimes committed by influential individuals. Those though did not happen before the eyes of thousands of witnesses. The initial murder in the film occurs in a private space and is hidden in a believable fashion. That part of the screenplay is convincing. But the effort to abduct the children and to punish Ajay for helping them, are both done so publicly that the silence of the onlookers is ridiculous.

Really? Not one person steps forward? Not even a few seconds of the bloodletting surfaces on Youtube or any other online space? Not even one media house, not even a marginal off-mainstream platform or unknown blogger, has the courage to report these very openly conducted goings-on on the roads, malls and trains of Mumbai? Really?

It is a measure of the effectiveness of the film’s well-paced action choreography that these chase scenes manage to keep even a cynic on edge despite this.

The script’s bigger failing though is that it skims over too many characters without giving them enough flesh. The murderer had particular potential because of his lack of redeeming factors, but we get to know little about him beyond the fact that he is a spoilt brat. Of the quartet who set out to expose him, you may remember Aanchal Munjal as the young artiste who played Kajol and Arjun Rampal’s child in We Are Family (2010). She and Shivam Patil – Anushka and Rohan here – are worth watching out for.

The execution of Ajay’s relationships in Ghayal 2 are too reliant on fan affection for Sunny and nostalgia for the first Ghayal. Sunny’s acting too remains dated, with every emotion over-stated and over-done.

There is, however, another note-worthy dynamic at play here. It is interesting to see an omnipotent industrialist (Narendra Jha, nice) and his wife (Tisca Chopra) torn between their conscience and their natural parental instincts when they recognise the potential for evil in their offspring; a wealthy father’s arrogance tempered by paternal fears; a mother who is shocked at the wrongdoings being committed in her presence yet does not stop them; another (Nadira Babbar) who points out to her son that it is the job of a parent to cover up a child’s mistakes, not his crimes.

This and the film’s well-executed chases are dragged down by its stupid improbabilities, its lack of focus, too many loose ends and oh yes, those bad white extras. When one of them tells Sunny in the end to drop his gun and follows that up with a laboured, “Now we are going to beat you up with our bare hands,” I laughed out loud. It reminded me of cars reversing with twangy, recorded voices warning bystanders, “Attention please, this car is backing up.” What is it with Bollywood producers that they will hire a helicopter for a grand finale but will not spend on above-average Caucasian actors for incidental roles or invest in good writing?

The name of Ajay’s newspaper in this film is no doubt a bow to Dharmendra’s 1969 film Satyakam in which Deol Senior played an idealist struggling against a corrupt world. That classic deserved a better-thought-out tribute than this one.