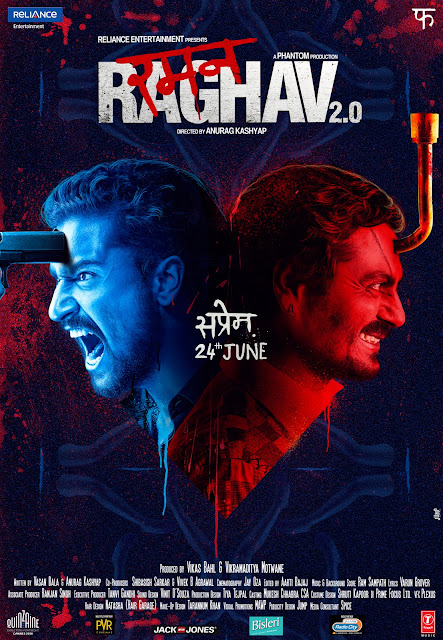 In one of the most telling scenes in writer-director Anurag Kashyap’s Raman Raghav 2.0, a man assaults his girlfriend in the presence of two policemen. The cops have been assigned as her personal security guards, to protect her from a notorious serial killer, yet they watch wordlessly when her own boyfriend roughs her up.

It is a powerful cinematic moment in a nation that has socially (and in some instances, legally) divided violence against women into categories of “acceptable” and “unacceptable”. Gangrape by slum dwellers: unacceptable. Marital rape: acceptable. Domestic abuse: acceptable. Stalking by a senior politician with the help of state machinery: acceptable. Digital rape of a subordinate by a senior editor in a five-star hotel lift: acceptable (even by Kashyap’s own yardstick, in a sense, as evidenced by one of his troubling quotes in the media). Rape of an intoxicated woman who fell off to sleep in the back seat of a cab after a late-night party: acceptable. Rape of a hard-partying drug addict who went home with a stranger at a club: acceptable.

There are many such moments in Raman Raghav 2.0, a film that purportedly tells the story of two maniacal individuals but is in fact a distressing portrait of society’s attitudes and responses to violence. This is not, as viewers would be expecting, a biopic of the notorious Mumbai serial killer Raman Raghav who was caught after a string of murders in the 1960s. This is the story of two deeply disturbed brutes, one a poor man called Ramanna, the other a policeman called Raghavendra Singh Ubbi, set in the present decade – hence the “2.0” in the title.

Each is kinky in his own way, yet one has a veneer of sophistication that helps him to move around in glamorous circles while the other is obviously crude but blends unnoticed into the streets. As the film progresses, we see how they are no different from each other and how – much as snooty wealthy folk would be repulsed by this mirror – one completes the other.

Many of Kashyap’s films so far have been about the pointlessness of violence and the manner in which our actions inevitably catch up with us. But what about the ones who get away? What about people who do not kill with communal, sexual or other motivations, but for the pleasure of it. Is every member of a rioting mob genuinely committed to the religious group they are supposedly fighting for, or truly angry about the harassment of a woman in their community by someone from the other, or paid to be there? What about those who join in for the heck of it?

Murder for the sake of murder. Murder sometimes committed in the moment. Murder committed to make way for another murder. Raman Raghav 2.0 is not, therefore, about pointlessness, but about the mindlessness in so much of the bloodshed around us.

Kashyap’s latest film may appear to resort to certain devices popular in the genre: the ominous sound of a metal pipe being dragged over a hard surface, for instance. Yet none of them is used in a clichéd, predictable fashion.

Interestingly too, though both protagonists are ferocious creatures, the portrayal of violence here is not in your face, gratuitous or exploitative. Aided in no small part by Jay Oza’s discreet camera and Aarti Bajaj’s seamless editing, we know that blood is routinely drawn and skulls are routinely cracked in this film, yet at no point do we actually see it happening. In fact, only once in the film do we get a shot of a murder victim’s face after the murder. In that scene alone is a prone body shown in its entirety post a crime.

The pacey narrative – with an eight-chapter structure – is unrelenting. Though the dialogues are smashingly effective, they do not rely on filmic melodrama or earthiness (the most charming part of Gangs of Wasseypur 1&2) for their appeal. They are hard-hitting because of the situations and settings in which they are set.

Holding it all in place along with Kashyap’s unswerving directorial intentions is one of the best casts put together for a Hindi film in recent times. Nawazuddin Siddiqui’s brilliance is now a given. Still, considering the number of gangster and crime flicks in his short filmography, it is amazing that he has managed to reach into himself to serve us something and someone so completely different from Faisal Khan of the Wasseypur films and Liak from Badlapur. His Ramanna is eerie, scary, disgusting and yet almost elicits laughs for the matter-of-fact manner in which he goes about his bloody business.

The leads are all the more striking because they do not get the benefit of repeated extreme close-ups or a repeated focus on their eyes and faces in much of this film. Kaushal, in fact, wears dark glasses almost throughout and many of Siddiqui’s shenanigans are captured in long shots.

With these two in full flow and the story revolving entirely around them, you would think it would be impossible for any other character to make a mark. It is a measure of Vasan Bala and Kashyap’s excellent writing and the wonderful cast that there are others who are memorable too.

Amruta Subhash as Ramanna’s sister is in top form. It would be Hindi cinema’s good fortune if it manages to tap more into this consistently lovely Marathi actress who, among other roles, was so moving as the young, widowed mother and struggling professional in Avinash Arun’s Killa.

In a film peopled with impressive talents – including little Saksham Sudhija’s beautiful, speaking eyes – Sobhita Dhulipala as Raghavendra’s girlfriend Simmy Naidu and Anuschka Sawhney as Ankita, a sexy guest at a party, merit a mention.

Raman Raghav 2.0 does not slip up tonally at any point. From Sona Mohapatra’s velvety voice at a nightclub early in the film to that remarkable overhead shot of Mumbai city’s beautiful ugliness in the twilight, from the impeccable sound design (crucial, since this is a film in which gore is heard but rarely seen) to Ram Sampath’s background score and songs that have been quietly woven into the narrative, it is all a perfect fit.

Anurag Kashyap has been a highly acclaimed writer and director for 13 years now, but I confess I have had issues with quite a few of his films, not just the widely thrashed Bombay Velvet but some that have been showered with reviewer and fan affection. Although he has been a producer of some gems over the years, several of his own directorial ventures have felt stylistically imitative of known international auteurs, rather than being rooted in his own personality and reality. As a result, most have not matched up to the sheer genius of his debut film Paanch (which remains unreleased due to a Censor ban followed by problems with the producer), Black Friday and a darling short called Pramod Bhai 23 that appeared in the omnibus volume Mumbai Cutting. With Raman Raghav 2.0, we once again get to hear and see the son of the soil at work.

Mein tujhe kuchh bhi kar sakta hoon aur mujhe kuchh nahin hoga (I can do anything to you and nothing will happen to me), a murderer tells a potential victim at one point in the film. This is not just one man talking because he has the confidence that the system will close ranks to protect him, this is the system, the government and the elite talking.

Raman Raghav 2.0 is layered, gripping from the word go, unnerving and, in a twisted way, hugely entertaining. It is also a stinging commentary on the times we live in.

He is back, people. Anurag Kashyap is back.