(Note: This is a review of the Hindi dubbed version of the Telugu film Baahubali: The Conclusion.) 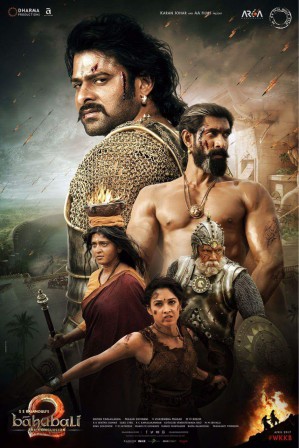 Fans of the Baahubali franchise have been discussing the hashtag #WKKB on the social media for a while now. If you have not guessed yet, that stands for “Why Kattappa Killed Baahubali”, a reference to the teaser in the closing scene of Baahubali: The Beginning in 2015. You will not find spoilers on the #WKKB front in this review. Hold on to your seats though for the answer to a far more pressing question: #DRTOHS.

In the first film, the tribal boy Shivudu (Prabhas) discovered that he is, in fact, Mahendra Baahubali, son of the late great Amarendra Baahubali (also Prabhas) who was robbed of the throne of Mahishmati kingdom by the machinations of his cruel cousin Bhallaladeva (Rana Daggubati) and uncle Bijjaladeva (Nassar). In Baahubali: The Conclusion, Mahendra hears the story of why and how that happened before setting off to avenge the deaths of his father and foster grandmother Sivagami (Ramya Krishna) and to free his mother Devasena (Anushka Shetty) from imprisonment in Mahishmati.

As with the opening film, this one too is an Amar Chitra Katha-style blend of mythological references and palace intrigue laid out on a vast canvas of visual grandeur. The proportion of the ingredients has been changed though, with myth and socially regressive themes being scaled down, family politics being scaled up, and the decibel levels being raised by several notches.

The novelty of seeing an Indian film so laden with heavy special effects at such a scale from start to finish has worn off in the two years since Baahubali 1 was released, and it is hard now to forgive this one for Mahishmati’s plastic façade and those painfully obvious CGI beasts. Somehow, nothing here seems to match up to that waterfall in Part 1. Still, when the going is good, director S.S. Rajamouli’s Baahubali: The Conclusion is pleasing to the eye, in particular with its costumes, lavish interiors and innovative stunts.

A film of this nature obviously requires a suspension of disbelief in that last department. And frankly, if we are willing to swallow the invincibility of the likes of Tom Cruise, Bruce Willis and the various Bonds down the decades, then there is no reason why we should not buy that scene in which Amarendra mounts an elephant by walking up its trunk with the animal’s assistance and – my favourite of the lot – that war-time gimmick involving palm trees, shields and Newtonian physics towards the end.

Those stunts, M.M. Kreem’s background score and the use of his songs to up the tempo of the narrative are what keep Baahubali: The Conclusion watchable even when the ridiculous over-acting becomes hard to take and the lack of freshness in the storyline sinks in. Daggubati and Shetty – both gorgeous, both equally charismatic – keep themselves relatively in check, which is admirable considering that over-statement seems to be the demand of Rajamouli’s storytelling in this cinematic diptych (“relatively” being a key word here). Prabhas’ pretty face somewhat compensates for all that self-indulgent posing about he does, most notably while Devasena sings a song about Lord Krishna in a scene that unwittingly betrays her man’s Oedipus complex.

The rest of the cast is laughable, with each rivalling the other for the year’s Worst Acting Awards. There is the usually wonderful Nassar who hams here to such an extent that he makes Sohrab Modi seem under-stated in comparison. The extras in every single scene – soldiers, courtiers and subjects – seem to be competing with the memorably howlarious bit-part players of the black-and-white era. And Subba Raju playing Devasena’s beau Kumara Varma is so bad, he should be declared a threat to society.

The queen of the film’s hamsters though (if such a word does not exist in the acting lexicon, then it should) is Krishna whose eyes remain fixed in a bulbous stare through the nearly three hours of this film’s running time.

For all its seeming innocuousness, Baahubali: The Beginning was a horribly narrow-minded film that rolled out a range of stereotypes couched in its good-looking frames. The black-denotes-evil cliché was exacerbated by its white-is-glamorous conviction. Disability coincidentally found its way only on to evil people. And Sivagami’s power paled into insignificance in the face of Shivudu’s sexual violation and ultimate subjugation of the warrior Avanthika played by Tamannaah Bhatia.

In that respect, Baahubali: The Conclusion is a step up. Devasena remains strong and active from start to finish, and is at no point reduced to being Shivudu or Amarendra’s sidekick. She is a partner, not a prop. Still, the marginalisation of Avanthika in this film is almost tragic. In Part 1 she was a feisty woman whose mission was taken over by Shivudu once he ‘makes’ her fall in love with him and discover her inner femininity. In Part 2, she is an absolute nobody with nothing to say and just a few seconds of screen time in mass scenes. In that context, giving Bhatia fourth billing in the closing credits (after the two leading men and Shetty, but before Krishna) comes across as condescension, not an acknowledgement of her star status.

There is so much else that is troubling in Rajamouli’s worldview: for one, the undisputed right of the Kshatriya to rule. If there is a question here, it is only: which Kshatriya – the good guy or the bad guy? And either way, it has to be one of the guys. All the spectacle in the world, the Durga-esque positioning of Sivagami and Devasena, and the emphasis on Mahendra/Amarendra’s virtues cannot camouflage Baahubali’s disturbing romanticisation of social status-quoism.

This then is the conclusion of this review: Baahubali: The Conclusion is a cocktail of fun stunts, attractive stars, grand settings, terrible acting, conflicted attitudes and closeted conservatism. (Aside: The Hindi dubbing is impressive. A bow here to the choice of voices and to Manoj Muntashir, dialogue writer and lyricist for this version.)

As is always the case, each viewer’s response to the film depends on her/his priorities. My priority, I admit, is not #WKKB but #DRTOHS: does Rana take off his shirt (in the film, as he has for the posters)? Answer: yes he does. For good measure, so does Prabhas. Both men rip off their upperwear in an extended scene of hand-to-hand combat, to reveal perfectly sculpted, stunningly muscular torsos in what has now become commercial Indian cinema’s most-used formula across all states. In the way it is told, #WKKB is not as dramatic a revelation as expected. #DRTOHS, on the other hand, is absolute paisa vasool.
Rating (out of five stars): **1/4