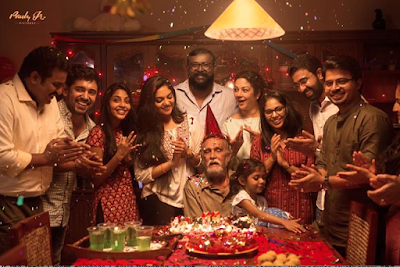 The promo line for this film should have been, “expect the unexpected.” Because nothing, not a trailer, not even a review filled to the brim with spoilers, can prepare you for what it has to offer.

I confess to having felt a fleeting flutter of trepidation when, in the opening minutes, one of the film’s protagonists announces that she might be suffering from a serious disease. It is already clear by then that Njandukalude Nattil Oridavela is designed as a comedy. Would it continue in the same vein? The question on my mind at that moment was: How can you possibly make a comedy centred around such a grave health issue without turning offensive?

Ask writer-director Althaf Salim, because that is precisely what he does.

Njandukalude Nattil Oridavela (An Interval in the Land of Crabs) revolves around the Chacko family formerly based in Kuwait and now back home. They are: Mum Sheela Chacko (played by Shanthi Krishna) and Dad Chacko (Lal), their elder daughter Mary (Srinda Arhaan) and son-in-law Tony (Siju Wilson) who have a child, their London-based son Kurien Chacko (Nivin Pauly) who is single and clearly anxious to mingle, their youngest, Sarah (played by Ahaana Krishna), who is surreptitiously dating a friend, plus an ailing grandfather.

The Chackos are well-off and, to all appearances, leading a relatively undramatic life. They are going about the business of living when their humdrum existence is interrupted by Mum’s medical scare.

Should they artificially rev up their energy levels to keep her spirits up? Would it be supportive to acknowledge her tension and their own, or for her sake should they pretend to be unaffected? How do they cope with their own fears while simultaneously having her back? Is there such a thing as a right thing to say when someone you love is dealing with an intense personal trauma? Would being peppy around her make things worse or better for her? In such a situation, should life, work, romance and plans come to a standstill? If they do not, does that make us selfish?

These are concerns most human beings have grappled with at some point. There are no definitive answers, but in the Chackos’ hits and misses you might find a reflection of your own struggles, and perhaps a realisation that sensitivity and consideration are perennial works in progress.

I will not say more about the plot, though if I did, it would not amount to playing spoilsport, because as is always the case but more than ever in this case, it is the treatment not the story that counts.

Blending humour with such a grim subject and sustaining it without being odious for even a moment is a feat by any standards. It is particularly noteworthy in Althaf Salim’s case because he does the tricky job with a self-assurance that belies his lack of experience.

Salim makes his directorial debut with this project. He has co-written it with George Kora. Malayalam film buffs already know him as an actor, of course, since he starred in Nivin Pauly’s 2015 superhit Premam and played the young Comrade Krishna Kumar’s sidekick in this year’s Pauly-starrer Sakhavu.

In terms of tone and tenor, Njandukalude Nattil Oridavela is on the same plane as 2017’s Thondimuthalum Driksakshiyum starring Fahadh Faasil and Nimisha Sajayan. In terms of filmmaking sensibility and talent, Salim is in the same league as the likes of Anwar Rasheed, Anjali Menon, Dileesh Pothan (who made Thondimuthalum and last year’s Maheshinte Prathikaaram) and Lijo Jose Pellissery, who have all earned stupendous box-office success with artistically experimental, unconventionally commercial ventures, marking a Malayalam New Wave of sorts in recent years.

The only predictable moment in this film comes in the form of a self-referential joke about Premam that can be seen approaching from a mile. The only awkwardness in the writing comes from the romance between Kurien and Rachel (Aishwarya Lekshmi). Their maiden encounter feels contrived and has obvious pretensions to coolth, while the games she seems to be playing with him in one scene are a cliché. The latter is a disappointing reminder of the suspicion with which so many Malayalam film writers view potential female lovers – the traitorous woman and the tease are staples for them, and Salim, it turns out, is no different. 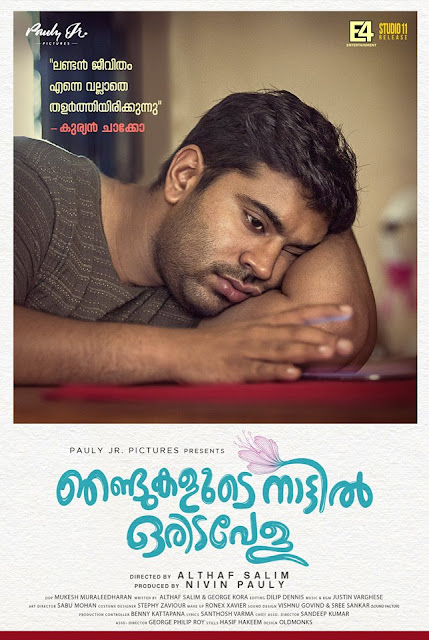 One of Salim’s many achievements with Njandukalude Nattil Oridavela is that though Pauly is the marquee name in the credits, his character is only a kinda sorta ‘hero’ here. The remaining members of Kurien’s family are all given importance, with Mum being the fulcrum of the proceedings. Pauly must be lauded for not ruining the film by pushing himself forward at the expense of the others. With his star clout, and considering that he is the producer, he could well have done so. Hats off to him too for spotting the potential in this material.

Pauly clearly has a good instinct for scripts. The surprise I felt on watching this film reminded me of my response to Action Hero Biju: I went in assuming it would be a fight fest, what I got was A Day In The Life Of A Sincere Policeman. Again, “expect the unexpected.”

It is also interesting to note Pauly’s seeming self-awareness, evident in the couple of jibes a friend throws at Kurien for his expanding girth. I do not want to indulge in body shaming here, but since cinema is an audio-visual medium, and since this fine actor’s prettiness is an additional source of considerable pleasure in his films, I do hope he does not repeat the mistakes of seniors like Mohanlal and Jayaram by letting himself go as they did. 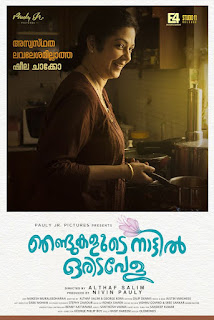 Njandukalude Nattil Oridavela marks the return of Shanthi Krishna to the screen after almost two decades. She is spot-on as the gutsy Sheela who finds herself supporting her family even as she seeks their support in dealing with her physical and emotional turmoil.

Ms Krishna and the rest of the cast deliver such believable performances, that they come across as a real family that has lived through this hell, rather than a team assembled to present a fiction.

Do not go looking for melodrama, or over-stated twists and turns. The story is told as if cameras have been placed in the Chacko home during a trying phase and we are watching their natural reactions to the curve balls life throws at them. What truly makes Njandukalude credible is that the Chackos are a regular, flawed family – they take each other for granted, some of them are self-centred, some cowardly, some more brave than the others, and with all this, they have fun together and they clearly love each other to kingdom come.

The film has been shot in such a manner that at some point, my hesitation about the choice of treatment for this theme gave way to such a level of immersion in the story, that without realising it, I found myself seated with the Chackos, sharing their feelings, their fears and their worries, even experiencing an occasional pang of guilt when I caught myself laughing at their quirks despite the potential tragedy unfolding in their homes.

Njandukalude Nattil Oridavela’s deceptive veneer of simplicity is its great strength. It is so sublime and so unexpectedly funny, that I was taken aback when I ended up choking back tears in those final moments. What a pleasantly unusual film.