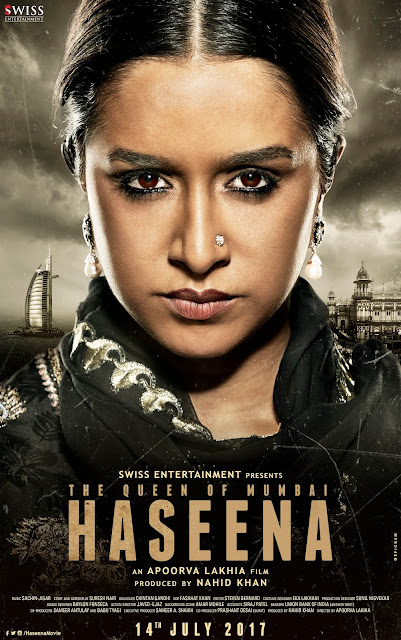 Sometimes real life offers you more promotional opportunities than a marketing genius could imagine. The Thane police’s arrest this week of underworld kingpin Dawood Ibrahim’s brother Iqbal Kaskar on charges of running an extortion racket against builders and others, could not have been more timely: it came just days before today’s release of director Apoorva Lakhia’s Haseena Parkar, based on the life of Ibrahim’s late sister.

The eponymous film takes us from the siblings’ impoverished childhood to his rise as a criminal, his escape to Dubai, the Babri Masjid demolition in 1992, the 1992-’93 Mumbai riots, her ascent in the 1990s to the position of the dreaded Haseena Aapa, all the way to this decade. The role of sutradhar is played jointly by Parkar (Shraddha Kapoor) and public prosecutor Rohini Satam (Priyanka Setia), during the former’s courtroom interrogation while she is on trial for extortion in the near-present day. Some flashbacks come in the form of Parkar’s answers, some come when we are allowed access to her memory bank while she refuses to answer certain probing questions.

This is a true story with staggering potential. As one character in the film says, “There have been many Bhais in Bombay but only one Aapa.” Who was this woman who took to organised crime in a way we usually associate with men? According to a recently published profile in Hindustan Times, Parkar muddied her hands after her husband Ismail was murdered by Arun Gawli’s gang in 1991.Thereafter she apparently took “control of D-Company’s operations in Mumbai” following which she “grabbed land, extorted money, kidnapped, ordered killings...” Hers is an intriguing tale crying out to be told.

Not this way though. Notwithstanding the real life drama surrounding its release, Haseena Parkar is dull in the overall analysis. The first half has promise with its atmospheric recreation of the grubby Mumbai locality where one of the world’s most wanted men and his sister spent their early years in financial struggle. The costumes, styling and production design are effective, though I will leave it to experts on 1960s-80s Mumbai to comment on the accuracy of the nitty gritty.

Kapoor is sweet for the most part as the younger Parkar, mining her natural child-like charm to portray her character’s youthful innocence – sweet enough that I am willing to look past that irritating suhag raat scene, and that other scene where a terrified Parkar rushes home to swab the floor of her house, fearing the wrath, it seems, of her cleanliness-obsessed spouse (an oddly inconsistent piece of writing considering that he comes across as a sweetheart who treats his wife with love and affection until then). The star’s brother Siddhanth Kapoor too makes an impression in the role of Dawood Ibrahim, and Ankur Bhatia as Parkar’s husband is noticeable for his strapping physique.

After a point though, it is clear that the script is going nowhere as it avoids taking a position on any of the parties involved. And so, the dominant image of Ibrahim here is of a thoughtful elder brother, what we get of Parkar too is a rose-tinted view, neither is projected as being particularly evil or culpable, and the film does not offer a single bit of information or a new insight to justify its take on them, nothing about the duo that you would not gather from news reports and editorials. In fact, Haseena Parkar is so gentle on its protagonists, that you might be forgiven for assuming that they are/were amateur pickpockets and shoplifters, not hardened criminals.

Following a series of calls to a local police station after the 1993 Mumbai bomb blasts, Parkar explodes in anger at one point. “Ek hafte se unko waqt par khana milta hai ya nahin, mere bachche school tak sahi salaamat pahunchte hai ya nahin, kuchh nahin pata, kyunki meri galti na honey ke bavjood, main yahaan ke chakkar kaat rahi hoon (For an entire week now, I have had no clue whether my kids are being fed or are getting to school safe and sound, because despite being blameless I am being repeatedly summoned here),” she yells at a senior policeman.

He yells back: “Chup! ... Ek hafta kya, ek mahina aana padega agar bulaaoo toh. Blast ka ilzaam hai tumhare bhai par, koi deshbhakti ke kaam ka nahin.” (Shut up! ... Why just one week? If I choose to summon you for an entire month you had better come. Your brother is accused of bomb blasts, not of executing a patriotic duty.)

This exchange reminded me of a sequence from a monumentally superior film, Onir’s I Am, in which a Kashmiri Muslim woman expresses her frustration at the constant visits to her home by Army personnel, at which her Kashmiri Hindu friend snaps back after listening to her complaints for a while, reminding her that her brother, who lives in the same house is, after all, a surrendered terrorist. The implication, of course, being that the Army’s eye on the family is justified. That scene in I Am, the build-up to it and what follows unarguably rank among the most intelligently, sensitively written and directed passages ever seen in a Hindi film. In Haseena Parkar though, the back and forth between Parkar and the cop remain hanging there without offering the viewer any food for thought.

As it rolls along, Haseena Parkar ends up being a staccato narration of facts, rather than a story pulsating with life. Even while seeming to state those facts, it uses kid gloves on the parties involved, with one exception: Muslims are clearly identified as the initiators of the violence in the Mumbai riots, after which blame is equally apportioned between communities – the narrative is careful not to single out majority community leaders such as Bal Thackeray and his Shiv Sena whose role in the riots is chronicled by the Justice Srikrishna Commission Report. I am not for a second saying Muslims played no role in Mumbai 1992-93, I am merely pointing out the cowardice in pinpointing Muslim culpability while skipping any mention of how some prominent Hindu names, as per records, openly incited mobs at the time. Why make a film on a prickly subject if you lack courage to say it like it is almost every step of the way?

Early positives are thus soon overshadowed in Haseena Parkar. The film’s lack of nuance in places is painfully literal. When a character says Parkar became an outlaw because she was tired of the fingerpointing she was subjected to merely for being Ibrahim’s sister, the director feels the need to actually show us a montage of people pointing fingers. Uff!

The court scenes become boring too, as Satam makes allegations without presenting any evidence, so that when at one point the defence lawyer asks, “Are you a lawyer or a news reporter?” it feels like a slap in the face of good investigative journalists.

As the older Parkar, Ms Kapoor is as bland as the screenplay. She tries to appear mature and menacing, but the effort shows too much. Besides, it is almost amusing to see the aging process being depicted by sticking ping pong balls inside each of her cheeks (I’m kidding but you know what I mean), while her skin remains as smooth as a baby’s bottom over several decades. After his initial spark, Mr Kapoor gets little chance to show off his acting chops since Ibrahim fades into the distant background.

The most interesting part of the film comes right in the end when, accompanying the closing credits, we get a sepia-tinted series of photographs of the real people depicted in this story. Those pictures would have held far more meaning for us though if Haseena Parkar had breathed life into its characters. Sadly, we don't learn much more about them from watching the film in its entirety, than if we had spent about two hours scouring newspaper archives or just staring at those pics.