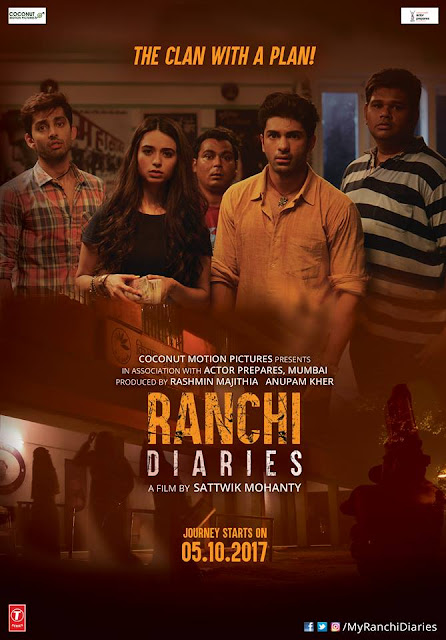 Ranchi Diaries is meant to be a comic tribute to Ocean’s Eleven, with a bunch of quirky characters who get involved in a bank heist gone wrong. Writer-director Sattwik Mohanty seems to have a sense of humour that he might put to good use some day when he decides to write a proper screenplay rather than this lazily handled assemblage of scenes. I don’t know what it took to rope Jimmy Sheirgill and young Taaha Shah into this project. Maybe it did not take much convincing because these two talented artistes have been struggling long enough to get projects worthy of them.

Sheirgill made his debut in Gulzar’s Maachis back in 1996 and has since been seen in a whole host of films, though only a handful have been deserving of his naturally likeable personality and acting skills. Taaha Shah made his debut in Y-Films’ Luv Ka The End co-starring Shraddha Kapoor in 2011 and has since then hung around on the margins of the industry. He is a good-looking kid with a screen presence, stuck – like his senior Sheirgill – in this meandering mess that aspires to be a film.

The activity here is set in Jagarnathpur in Ranchi where Manish Pandey (played by Himansh Kohli) is a safe breaker waiting for his big break before he can run away with his girlfriend, the ambitious wannabe popstar Guddiyaa Sharma (Soundarya Sharma). Unfortunately for her, she has caught the eye of the local gangster Thakur Ranjhe Pratap Singh (a decidedly uninvolved Anupam Kher in a role that amounts to a guest appearance). Thakur Bhaiyya, as he is popularly known, spends his time leering at her Youtube videos. The only way Guddiyaa can make a career for herself or escape this elderly creep is to run away from that town.

Shah is Pinku, a local hooligan. Sheirgill plays senior cop Lallan Singh. Satish Kaushik is sub-inspector S.N. Chaubey whose most memorable scene involves him farting because he ate too much at a party. And Pitobash, who was so fabulous in 2011’s Shor In The City directed by Raj Nidimoru and Krishna DK, is wasted here as a Naxal leader with hardly any screen time or lines.

So ya, there is a bank robbery, there are Naxals and there is some tomfoolery going on. At first the accents are funny, as is the stupidity of this entire clueless gang. Soon after the opening scenes though, it becomes apparent that Mohanty is as clueless as his characters and does not know how to proceed further with his concept. So Ranchi Diaries flails its arms about while the editor falls off to sleep on the job and the hapless cast does whatever they can in this whatever-you-wanna-call-it.

Guddiyaa is the brains behind the bank robbery in Ranchi Diaries because, well you know, as the overbearing voiceover tells us: “Har bawaal ke peechhe ek aurat ka haath hai.” (Rough, not literal, translation: behind every major problem, there is a woman.) In a less pointless project, I may have taken the time to join issue with that kind of backward language, but Ranchi Diaries is not even worthy of being argued with. The nicest thing about it is that it is just over one-and-a-half-hours long. Ideally, it should have been a 10-minute short with the song Godfather – which too deserved to be in a better venture – playing in the background.

Kabhi kabhi mere dil mein khayal aata hai, ki yeh film na bani hoti toh mujhe aaj subah dedh ghante zyaada sone ko milte. To be fair, Ranchi Diaries is not repulsive or puke-worthy or anything of that sort. It is just one of those thingies that makes you want to ask: why did anyone bother to make this? Seriously, why?

Rating (out of five stars): 0 stars