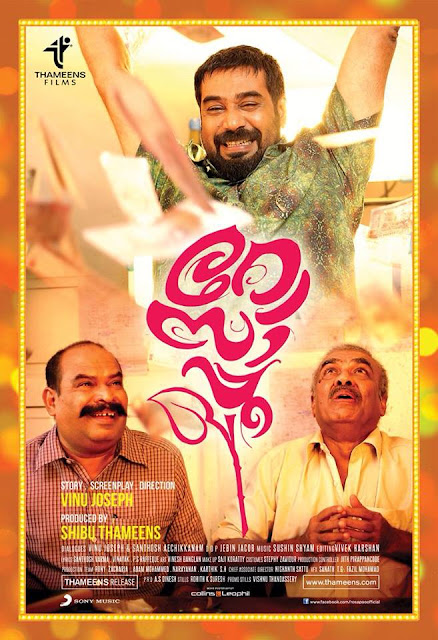 It beats me how an artiste as experienced as Biju Menon was not instinctively wary of this film’s flailing screenplay. Writer-director Vinu Joseph’s Rosapoo revolves around a down-and-out entrepreneur desperately initiating one poorly conceptualised venture after another. Each new business sends him deeper into debt, to get out of which he launches the next one, and then the next one, then the next.

In all these misadventures, Shajahan (Menon’s character) is joined by an equally desperate, impoverished young friend (played by Neeraj Madhav) who has long wanted to make a film but so far only managed to assist in a couple.

Dinesh Nair plays a third wheel in their group and is treated like a spare tyre by the screenplay. Basil Joseph steps into the role of their smooth-talking associate, whose mindless ideas Shajahan keeps falling for.

At first, Rosapoo has an infectious energy and charm. Menon is always a pleasure to watch, and possesses the skill to pull off both comedy and poignance with equal elan. Madhav has proved in a brief career dominated by supporting roles that he has what it takes to leave his stamp on any part, even carry an entire film on his shoulders when given a shot at playing the lead, as he did so effectively in last year’s Paipin Chuvattile Pranayam.

The best of actors need solid writing on which to rest their talents though, and after a while it becomes clear that this essential ingredient is missing in Rosapoo. Mutta Pattu (The Egg Song), which announces the group’s entry into egg selling, comes armed with a contagious verve, upbeat melody and rhythm, but once it is through, it is evident that the film has nothing much going for it beyond its vivacity.

In the interactions between the lead four, their introduction to the production executive Sajir (Soubin Shahir) and especially in their over-the-top scenes with the low-grade writer V.T. Shankar (Salim Kumar) you can sense where Joseph wanted to go with this. He has a capable cast at his disposal. What he does not have are the chops to pull off comedy, black or otherwise.

With the direction and writing veering way off the mark, Rosapoo’s uneven production quality becomes particularly jarring. Among other things, the tips of Neeraj Madhav and Basil Joseph’s noses are cut off in Mutta Pattu, in parts where it would have been shot before a green screen.

In the end, what stands out though is the unfunnyness of it all, the inability to strike that vital balance between a comic tone and difficult circumstances, clichés about the porn film industry born of patriarchal notions of the feminine ideal, and quaint conservatism that sees itself as liberalism. (Spoiler ahead) In one instance, a young woman’s wedding is cancelled because her father’s friend borrows all her jewellery. The borrower offers to barter himself to repay his debt, expressing willingness to marry the girl as compensation. Everyone agrees despite the distastefulness of the proposal from a man who, in any case, is vastly older than she and a proven loser at that point. And they all live happily ever after. Uff! (Spoiler alert ends)

Rosapoo is a floundering mess. What are you doing on this road to nowhere, Biju Menon?

Posted by Anna MM Vetticad at 1:38 AM