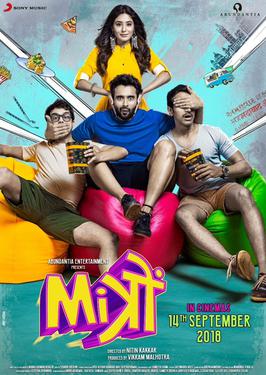 The first thing I did after watching Mitron was to check the credits for Jacky Bhagnani’s producer father’s name. I could not find it, which makes me wonder what the hell and Hades director Nitin Kakkar – the man who gave us that sparkling gem called Filmistaan – was thinking when he chose to cast Bhagnani Junior as his hero here. Each time a youngster this personality-less enters filmdom, you hope and pray he quietly retires on reading the message the audience is sending him, so that no critic is forced to spell it out in black and white and all the hurtful colours of the rainbow.

It feels harsh to say these things without mincing words and I don’t want to intentionally cause pain, but when an actor’s zero charisma ruins what feels like a screenplay with promise, perhaps all of us need to lash out at an industry that makes talented outsiders struggle for a single tiny role while giving chances again and again to star kids even after viewers have repeatedly rejected them, an industry so blinded by its privilege that when someone calls them out on their nepotism, they mock and marginalise her as revenge.

I do not know what Kakkar’s compulsions were, or whether he genuinely believes that Bhagnani’s sweet, paavam-boy look suits this role. What I do know is that I loved, loved, loved Filmistaan, which made me laugh till I cried, died and was resurrected, and that the combination of Kakkar with Sharib Hashmi in Mitron made me sit up and take notice (Hashmi played one of the leads in Filmistaan, and is the writer who has adapted the story of the Telugu film Pelli Choopulu for this one). As it turns out, Mitron’s screenplay has quite a bit going for it, and the casting of the leading man is the spoke in the wheel.

Jai (Bhagnani) is a lazy, indisciplined Gujarati youngster without a purpose. He lolls about, yet to find a mission in life and getting on his father’s nerves as sons have got on fathers’ nerves for centuries. He enjoys culinary experiments and would ideally like to be a chef, but goes down conventional paths under pressure from his tradition-bound, exasperated parent. This includes agreeing to an arranged marriage, which leads to an accidental “ladki dekhna” meeting with Avni (Kritika Kamra), whose son-obsessed father has failed to notice what a bright, enterprising daughter he has.

Jai and Avni bond over their frustrations with their respective parents, though her purposefulness is a stark contrast to his fatalistic, lackadaisical attitude. Meanwhile, he finds a potential bride. She, on the other hand, refuses to give up her professional ambitions even as the quest for her groom continues.

The point about autocratic, judgemental parents imposing professional dreams on their hapless children was explored with profound insights and emotional depth in Imtiaz Ali’s lovely, underrated Tamasha in 2015. It seems like an incongruous comparison considering that that film had the remarkably charismatic Ranbir Kapoor playing the male protagonist. Still, it is worth mentioning because Tamasha displayed an acute understanding of Kapoor’s character’s situation, but completely forgot its heroine (played by Deepika Padukone, no less) halfway through the film. On the other hand, Sharib Hashmi’s screenplay is thoroughly committed to its interesting female lead played by an interesting female actor.

It is not often that Hindi cinema bothers with women’s career dreams. TV’s Kritika Kamra makes her big screen debut as the entrepreneurial Avni, a woman performer with spunk playing a character with spunk. Unfortunately for Kamra, she is done in by Bhagnani who is too insipid to make Jai’s  lack of drive worth watching, and ends up pulling down the entire film and robbing it of all zest. If Bollywood has any common sense, it will take note of her arrival and give her another opportunity to display her acting chops in this new medium.

Mitron is strewn with hints of what it might have been if it had been better cast. Hindi cinema tends to be very culturally insular, its worldview largely being restricted to the people and preoccupations of the Hindi belt and Mumbai where it happens to be based. It is therefore interesting to see that Mitron is set in India’s Gujarati community, which it portrays complete with their pluses and quirks, yet remains devoid of caricatures or stereotypes.

Another passing insight into Hashmi’s worldview, which is clearly more expansive than his industry colleagues’ vision, comes from a brief reference Jai makes to Mani Ratnam’s Mouna Ragam. Indian cinemas other than Hindi are replete with references to films across Indian languages including Hindi and it is not unusual for them to mix languages in the dialogue writing. Hindi films on the other hand tend to be very parochial, only occasionally turning their gaze outward for a few laughs or exotica. Mitron, in that sense, is different even if not massively so.

Mitron’s attitude to women too is uncommon in the Hindi film industry but not in the manner of films such as Akira made by directors who are clearly clueless about feminism but have of late discovered its commercial potential. The episode with Jai’s nasty, opportunistic girlfriend, for instance, does not have that venomous tone of misogyny now so familiar from films like Pyaar Ka Punchnama 1 and 2 and Sonu Ke Titu Ki Sweety – unlike in those horrid, hateful films, here she is one girl, not a comment on womankind at large.

Sure, Mitron’s ending is a bow to social norms, but it can be excused if you recall a conversation in which Jai tells Avni’s father that parents need to stop pushing kids to hurry through life, and should instead leave them to make their choices at their own pace. This, in essence, is the point of the film.

All this fades into insignificance though in the face of the overall lack of energy in Mitron that comes from a vacuum opposite the sparks emanating from Kamra’s Avni, as a result of which the simplicity of the story and the storytelling style end up coming across as predictability instead. Frankly, I found myself wondering what this film might have been if Jai had been played by Vicky Kaushal who has been dealt a poor hand by Anurag Kashyap’s Manmarziyaan – also in theatres this week – and yet has managed to eke something out of nothing in that film.

I derived some satisfaction from assuming that Hashmi shares my frustrations, after watching a scene in which a call centre boss in Mitron yells at Jai and calls him a “sifaarshi tuttoo”. An inside joke? Perhaps. Ouch, did you say? Well, if you winced while reading that, know that writing it was no cakewalk – hearing the truth no doubt hurts, sometimes speaking the truth hurts too.