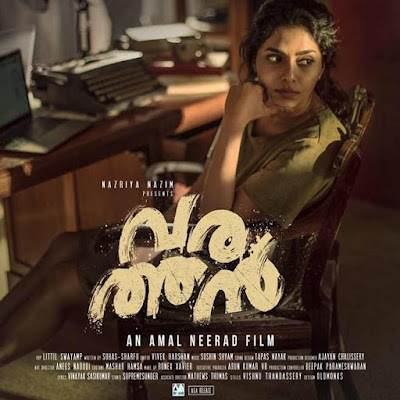 Varathan (Outsider) is an instructive example of how a filmmaker may achieve feminist brilliance by largely yet not entirely understanding women’s concerns and then allow his narrative to spiral downwards into patriarchal clichés because, well, he does not entirely understand women’s concerns. I am willing myself to believe that lack of comprehension is the reason for the unravelling of Varathan, and that Amal Neerad is not just another one of those contemporary directors who woke up one morning and said, “Hmmm, women’s rights sell these days so let’s give it a shot.”

From the moment Varathan’s Priya (Aishwarya Lekshmi) and Abin (Fahadh Faasil) leave Dubai to make a family property in rural Kerala their home, a sense of foreboding grips Varathan. The roving eyes of the men in this remote place are fixed firmly on her who they well remember as the smart girl they lusted after even in her schooldays, the one they resented to the point of hate because she seemed beyond their reach, Priya The Unattainable One. Even as they salivate over her, as men might salivate over a delicious-looking leg of mutton, they also closely watch with animosity the man she finally chose for a partner.

As women with their antennae on high alert tend to do in real life, Priya notices their discomfiting stares long before Abin does, and senses a presence even when no one appears to be physically around. The first half of Varathan is chillingly beautiful in its grasp of stalking, voyeurism, intrusions on personal space, and how these can traumatise a woman.

DoP Littil Swayamp – whose genius was showcased just recently in Koode – is the star of this portion. His camera is a stalker and a palpable presence in Varathan, following Priya around as a spectre might even before the characters have become aware of it in a paranormal thriller, tracking her from afar, entering a room after her, hugging the ground and then swiftly rising up as she arrives at a distance, looking down at her from picture frames and wall fittings, never comfortably sauntering beside her, always haunting her instead.

I watched and I thought: Amal Neerad and his team really get it, they get what it feels to be a woman in the vicinity of a creepy man who is undressing her with a look, they get how a woman’s skin crawls when a strange man’s eyes bore through her clothes and drill right through her body, they get that there are men who resent a smart woman for no reason but their own inadequacies and insecurities.

Sure the film exaggerates the situation a bit in the sense that there seems to be only one man in the entire village who is not a leering, lecherous, sexually obsessed and repressed scumbag, but for the most part, all I could think was: this team has grasped this unfortunately overriding aspect of a woman’s life as flawlessly as Vikas Bahl displayed his understanding of a woman’s mind in the Hindi film Queen and the late Rituparno Ghosh struck the nail on the head in all his Bengali films but most especially in Dahan. 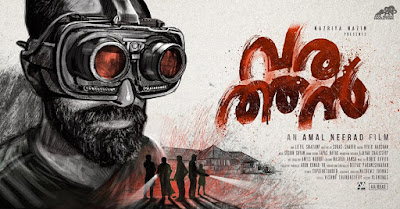 And then it all comes apart in the final half hour or so. Suhas-Sharfu’s screenplay is faultless until then. The chemistry between the lead pair is pleasant, their easy equation a contrast to the hypocrisy and gender segregation all around. The entire cast delivers spot-on performances. Aishwarya Lekshmi deserves to be singled out for praise though for her interpretation of a woman constantly on edge and frustrated because she does not know how to convey her instinctive fears to the man she loves, as does Sharafudheen for becoming  the embodiment of a repulsive fellow who occasionally fakes a harmless demeanour. Sushin Shyam’s unsettling, well-used musical score and Tapas Nayak’s clever sound design round off this impeccable mix.

But then, as I said, it all comes apart as Varathan abruptly relegates Priya to the background, switches from psychological drama to stereotypical action thriller mode, and is overtaken by patriarchal and cinematic clichés. Man-as-protector-of-his-woman and man-in-charge is combined with Indian cinema’s decades-old answer to sexual harassment and violence against a woman: the avenging angel going on a superhuman rampage.

(Spoiler alert) I briefly guessed that this is what it would boil down to in that early scene when Abin asks Priya not to crush a cockroach. I actually prayed that this is not how it would turn out when he discovers the uncommon gadgets and firearms in the house. Seriously, I did – I actually whispered from my seat, “Oh God, Amal Neerad please don’t be a disappointment.” What I feared in those passing moments is exactly what Varathan’s climax ends up being. It gets so literal and predictable at one point that Abin is actually finally shown stomping on a cockroach with his foot. Uff!  (Spoiler alert ends)

I should have known better than to hope. After all Amal Neerad does make his intentions very clear when the title page reads “Fahadh Faasil in and as Varathan”. Still, to lull us into optimism with so much sensitivity until that long-drawn-out, conventional-as-hell ending where it becomes evident that the fabulous, strong heroine was not a character in her own right, that she was created primarily to be the spark that drives the hero to get down to the business of becoming whatever it is people mean when they say “be a man”. The complete change in tack in the finale feels like such a betrayal. How could you do this, Amal Neerad?