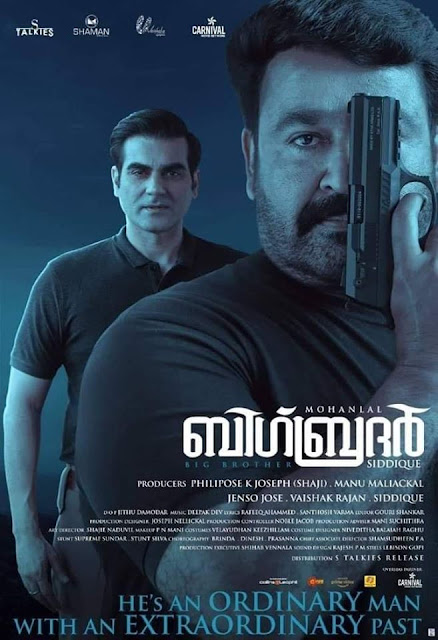 When a man has spent 24 years of his life behind bars, adjusting to the world outside would obviously be a challenge. Mohanlal plays one such chap, 40-something-year-old Sachidanandan who was convicted for murder as a teenager and two dozen years later is now set for life outside a prison cell.

You heard that right: Lalettan, who turns 60 this summer, plays a character who has barely crossed 40 in Big Brother. That should have been the first warning sign that this film would turn out to be yet another embarrassing misadventure in the superstar’s filmography that has for at least a decade now been dominated by repetitive, unimaginative works desperately trying to convince audiences that he is forever young and forever attractive to women young enough to be his granddaughters.

Towards the latter end, Big Brother stars a baby-faced girl called Mirnaa Menon who falls for Sachidanandan and looks moony-eyed at him throughout a stereotypically shot song sequence in which she is dressed in flowy, frothy chiffon attire. You know the type of number that has been featured in formulaic commercial Indian cinema across language industries for about two decades? (Possibly to pre-empt all lampooning, the kid admirer’s feelings are described by one character as an instance of Stockholm Syndrome because of the circumstances in which she gets acquainted with Sachidanandan.)

Big Brother is about how Sachidanandan’s efforts to adjust to freedom are eclipsed by a faceless, omniscient drug kingpin called Edwin Moses. Why Moses is after him is a question the uninteresting answer to which comes in the climax. Through the inexorable 2 hours and 45 minutes that pass between the beginning and the end of this torturous film, we meet Sachidanandan’s brothers Vishnu (Anoop Menon) and Manu (Sarjano Khalid), Vishnu’s wife Vandana (Honey Rose), other family members with whom he is living and Manu’s girlfriend Gemini (Gaadha) in addition to three flunkeys played by Irshad, Tini Tom and Vishnu Unnikrishnan. The script gives none of these people anything to remember them by apart from the well-known stars playing some of them. And yes, I repeat in case you did not notice, little Sarjano Khalid from June has been cast as Sachidanandan’s brother in Big Brother, no doubt to further convince us of Lalettan’s eternal youth.

Oops, Big Brother was such a sleeping pill that I dozed off while writing that last paragraph.

So where were we? Ah yes, Manu was instrumental in securing his elder sibling’s release from jail. When he and Gemini are attacked for unknown reasons by a violent gang, Sachidanandan is forced to circumvent the law to rescue the boy.

Another purportedly significant character in Big Brother is a north Indian cop played by Arbaaz Khan who has just been posted in southern India to hunt down Edwin Moses. This is the Bollywood actor’s Mollywood debut. Why Mollywood sought him out is a mystery. Khan brings nothing to this role except expressionlessness and gets nothing out of it except the challenge of delivering poorly written dialogues that awkwardly mix Hindi and English with Malayalam. Veteran actor Siddique too is cast in a pointless role in this pointless enterprise.

One of the few positives I could find in Big Brother is that stray Hindi dialogues are accompanied by Malayalam subtitles embedded in the print.

One of the few innovations I can recall from this film is the villain sending explosives-laden toy cars to chase the hero and his sidekicks in a godown. But that high lasts just for a few seconds. There is also a reference early on to an unusual natural ability Sachidanandan possesses. That too, after a while, plays little to no part in the proceedings. A rather sensational example of systemic police corruption revealed in the beginning again comes to nought.

For a film that is supposed to be a thriller, Big Brother offers zero excitement after the initial fleeting suspense over how the hero once used his extraordinary gift for an extraordinary purpose.

There is absolutely nothing by which to recommend Siddique’s Big Brother. Even Mohanlal’s acting here is meh, and considering how stiff-limbed he is, it is amusing to the point of being sad to see scenes in which he has to, among other things, single-handedly overpower a supervillain, fly through the air and send men flying with his fists.

Feel the “Lalhood” – that was the tagline flashed at the end of Big Brother’s trailer. Maybe “Lalhood” is a new word for the world’s most boring film.