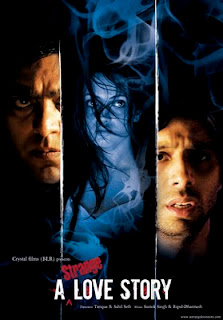 It took two full human beings to direct this film! Well, I’d like to compliment them because A Strange Love Story must rank as one of the most aptly named films of the year. It truly is strange. The film stars Riya Sen and Ashutosh Rana, if you insist on knowing the known names in the cast first. But the one I’d really like you to meet is Eddie Seth who plays “world famous photographer Kabeer” (not my words, it’s on the film’s official website). Kabeer meets pretty Jennifer a.k.a. Jia (Riya Sen) at a party. The two subsequently visit a lonely dargah at night, because … well, how else would the horror story unfold? While they are there, a spirit falls in love with Jia and before you know it, odd things start happening to her and to the people around her.

Never mind what the rest of the story is. Since the film’s website is quite delightful, please allow me to quote from it again: Jia is apparently “a wild and bohimian (sic) girl”. How does A Strange Love Story illustrate that point? Well, she wears short dresses, drinks, attends parties at nightclubs and smokes joints. When chided by a friend for the latter bad habit, Jia asks: If your mother died and your father hooked up with a girl your age, what would you do? Ah, the world’s drug problems explained!

The film must be lauded for its secular approach to horror. The lead couple visit Hindu, Muslim and Christian holy men to solve their problems. The Hindu priest is a lecherous sort whose lust for Jia gets him into trouble with her bhoot boyfriend while a Muslim cleric (whose flunkey plays football with ghosts) finally utters some mumbo jumbo that scares the spook away. Jia by the way is a Goan Christian who says “Jijjus” for “Jesus” in Rakhi Sawant style. Since I’ve just seen Riya Sen deliver a fine performance in Rituparno Ghosh’s Noukadubi, I’m tempted to be kind to her and blame it all on M/s Tarique Khan and Sahil Seth.

Other humungously entertaining things happen in this film. We are told that the world is divided into humans and animals, and then there is another species: ghosts. The one who falls for Jia takes human form to woo her. This Jinn-nath befriends Kabeer in the bargain. Towards the end of the film, when a policeman asks Kabeer about that friend, Kabeer replies absolutely straight-faced: “He’s not X, he’s a Jinn-nath.” Oh, that explains it all, says the policeman nonchalantly, as though it is the sort of sentence he’s used to hearing every day.

This is the kind of story that could swing either way – it could come across as silly or quirky, depending on the treatment. A ghost falling in love with a human being was the theme of Vijaydan Detha’s charming little story which Amol Palekar made into the film Paheli (yes, kill me if you must, I know I’m one of the few people in this country who found that film sweet). But A Strange Love Story is constrained by lacklustre direction, an even more lacklustre hero who, coincidentally, is the producer’s son, and an absolute lack of energy, all of which add up to a silly product! There are precisely two genuinely eerie moments in the film – yes, I counted. The only other things I remember liking about it are Riya Sen’s wardrobe and smooth complexion, and the interiors of the various houses she visits. There is also a hilarious song picturised on the hero featuring lots of Caucasian women and a central female figure in silver silk (or was it satin?) flailing her arms and the fabric around as though she’s a bird. It reminded me of the songs with gori ladies in that other classic I watched earlier this year, Happy Husbands, though to be fair, that film was even stranger than A Strange Love Story.

So it’s confession time: while watching this film, I amused myself by pretending not to notice the amorous couple in the row just ahead of me in the hall and wondering about a solo female viewer at another end who watched the film with such concentration that I found her intriguing. Arrey, stop judging me! I spent Rs 150 on my ticket, and I have a right to seek out my money’s worth!