Take the Salman Khan-style action and dialoguebaazi of Wanted. Add three times that measure of Dabangg-style humour and Salman-ness. Replace the farting ape from director Anees Bazmee’s earlier misadventure No Problem with a flatulent human who lifts up his kurta to break wind in a tribute to “rajma chawal”. Get Salman to urinate on a haystack to mark the film’s interval, which in this case is called the “pee break” / “tea break”. Throw in repeated references to Salman’s earlier hits. And there you have it – a recipe called Ready. 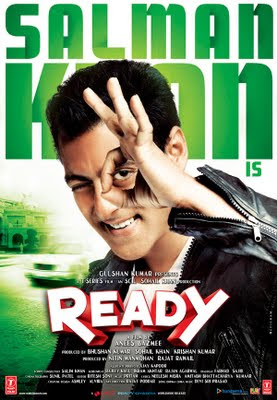 The film stars Salman as Prem, a choice of name that’s of course a nod to so many of his best-loved roles. He’s a resident of Bangkok who is averse to marriage but unwittingly falls in love with an imposter. Sanjana Singh (Asin) pretends to be a ladki Prem’s parents wanted him to meet as a prospective bride. The excuse for Sanjana’s subterfuge is that she is being forced into marrying her gangster cousin by her gangster uncle, and Prem’s home seems like a good hiding place. The uncle in question has a gangster brother he hates. And so with two warring underworld families, a damsel in distress and a reluctant groom, Ready lifts off.
The film starts out with the promise of being a nice, unapologetically over-the-top comedy. The opening sequences are neatly done and enhanced by some smartly inserted star guest appearances. And c’mon, just look at the team of Ready! Anees Bazmee is, after all, the director of No Entry, Welcome and Singh is Kinng. Just last year Salman delivered the stomach-achingly hilarious Dabangg. Asin – who is still to find her footing in Bollywood – has been lauded in the southern Indian film industries for her comic timing. And actors Paresh Rawal, Mahesh Manjrekar, Mohan Joshi, Akhilendra Mishra and Sharat Saxena have proved in the past that, given the right project, they are capable of cracking our funny bones. I did say, “given the right project”, didn’t I? Because though Ready does have some entertainment value, as I said at the start, it’s too much of a repetition of the many things Salman has done in recent years.
In fact, more than anything else, this film is a homage to Salman. A string of his earlier hits are referenced here. And while I split my sides listening to Prem put new words to a tune from Maine Pyaar Kiya, after a while the endless mentions of his films became tedious and began falling flat. The script’s and the director’s reverence towards the hero is evident in every scene, but particularly in the way the camera affectionately hugs his face in extreme close-up at the end of the Dhinka chika number even though Sanjana is standing right next to him.
In fact, as Ready honours Salman, the one who comes off the worst is Asin. Her face is poorly lit up almost throughout the film. The make-up seems designed to make her look wan. Whoever selected her wardrobe actually managed to make a slim girl like her look large waisted and ridiculously padded up in the chest in some scenes. And the production team didn’t even bother to spell her name right in the opening credits: she’s Asin Thottumkal, not Thottukmal, people! A pity, because if you’ve seen Asin at her best you will know that she’s capable of being so much more than just a badly dressed appendage to the hero’s story.
But the big question for Salman fans would be: is this film funny? Weeeelllll, after a comical start, it petered out for me into being amusing in parts but also tiresome with all its hero worship. That actually got me a little worried. Salman Khan has for years been considered one of our most bankable box-office stars by producers, distributors and theatre owners. But with the success of his TV shows Dus ka Dum and Bigg Boss, and his films Wanted and Dabangg, he also managed to acquire that aura that comes from gaining acceptance among what Hindi film industry insiders describe quite politically incorrectly as “class audiences”. It would be such a pity if he goes the way of still-a-superstar-but-seriously-risking-losing-that-status Akshay Kumar or Govinda whose recent track record shouldn’t erase our memories of him as one of the greatest comedians in Hindi film history. What Govinda did in the past, Akshay has been doing in the last two years: he’s repeating himself. Not only does a feeling of sameness pervade Ready, but Salman mouths dialogues filled with puns and rhymes. Sentences like “jiske paas family support hai, usko kaun deport kar sakta hai?” can’t sound clever forever! God, the longevity of the Khans has been such a lovely phenomenon for the audiences – please don’t let Salman go the Akshay-Govinda way, please please!
On the music front, Character dheela hai and Dhinka chika are fun. But that doesn’t alter the fact that music director Pritam has shamelessly plagiarised Character dheela hai’s tune from Modern Talking’s hit song Brother Louie. Don’t believe me? Compare for yourself the links I’ve posted in the previous sentence.
On the positive side … well, it’s hard to resist Salman’s charm despite this film’s many flaws and its cloying adoration of the man. Paresh Rawal playing a corrupt accountant and Mahesh Manjrekar as Prem’s forgetful father lift the film each time they appear on screen. Anuradha Patel looks lovely. And though Salman is fit and well-maintained-at-45, it beats me why he would do himself the disservice of having Ms Patel play his mother when she looks young enough to be his younger sister.
But that’s just me. Going by the reactions in the hall where I watched Ready, I suspect that seriously die-hard Salman fans might actually enjoy this tribute to their favourite star. But for that very star’s sake, and because there is a space in our lives for crazy comedies, I hope he doesn’t do another Ready.
Rating (out of five): **1/2
CBFC Rating:                       U/A with one cut (The Censor committee wanted two casteist words removed as a result of which the film maker had to cut out a 31 second scene. The Censors’ double standards are evident from the fact that while casteism is frowned upon, racism has so easily passed muster. In one scene, a black man is told: Tumhara chehra national TV par dikhaayen toh poori duniya ka nazar utar jaaye. Elsewhere, a Bangkok local is addressed as “noodle”.)
Running time:                        140 Minutes
Language:                              Hindi


Photograph courtesy: http://www.readythemovie.com/media/media.html
Posted by Anna MM Vetticad at 10:23 AM