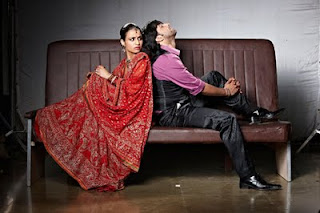 Love Express feels like a Jab We Met gone flat. In JWM – a fine example of a road movie – the girl gets over her affection for her boyfriend and gradually falls in love with a guy she first bumps into on a train. In Love Express, a young couple (he a rich NRI, she an Amritsar di kudi) are being emotionally coerced into marriage because their fathers are friends. He’s too liberal to believe in arranged affairs, she’s in love with a munda back home. The two get engaged, but on the train that takes both mega-families from Amritsar to Mumbai – where the wedding is to take place – they hatch a scheme to convince their parents to call it off.
Not only is the plan partly ineffectual, the part that does work is mildly offensive. Kanav and Ashneet actually pretend to rape each other, each episode orchestrated to be witnessed by one set of parents when the other is not around. From the tone of the movie, I gathered that it’s all meant to be funny, but I didn’t find myself amused.
Be that as it may, it’s rare for Bollywood to set a film on a train. Thirty-one years back producer B.R. Chopra invested big money and a bigger canvas in The Burning Train which starred Dharmendra, Hema Malini, Vinod Khanna, Parveen Babi, Jeetendra, Neetu Singh and Danny. Unlike that film, Love Express rests on the shoulders of a bunch of unknowns: debutant director Sunny Bhambhani and the lead cast are graduates from Subhash Ghai’s Whistling Woods International school. Ghai certainly needs to be commended for providing an opportunity to young talent by producing this film and ensuring its release. But though there’s tremendous potential in the story of a reluctant bride and groom ultimately falling in love on a short train journey, the film is just plain dull.
Love Express suffers from slack direction and weak writing. Too many characters among this train-full of Punjabi relatives are caricatures. Several cast members also need acting lessons, especially dadaji’s irritating chamcha and that snooty, overweight aunty. If you must be deliberately over-the-top Ma’am, please learn something from Kirron Kher who has elevated the task of playing a Punjabi mommy/aunty-type to a fine art. And since Bollywood has given us several vivacious Punjabi songs – including and especially Mauja mauja from Jab We Met – this film’s Rocking shocking family sounds more wannabe than Punjabi cool.
The film does have a few pluses. The landscapes through which the train passes are picturesque. Om Puri manages to lend some mirth to the bride’s perceptive grandfather although the character feels like a revisitation of Dara Singh’s part in … yes, JWM again. The role of Kanav rests on the shoulders of a sweet little debutant called Sahil Mehta who will hopefully get noticed by other producers and be cast in better films in the future. Since there are so many youngsters involved in this film, I genuinely do want to say something encouraging. But the sad truth is that Love Express is a train to nowhere.
Rating (out of five): *
CBFC Rating:                       U/A (The Censors were open to giving the film a U certificate if a particular mock rape scene was removed. The producer was not willing to make that concession, so a U/A it is.)
Running time:                        103 Minutes
Language:                              Hindi
Photograph courtesy: http://www.muktaarts.com/filmography/loveexpress.asp
Posted by Anna MM Vetticad at 9:01 PM