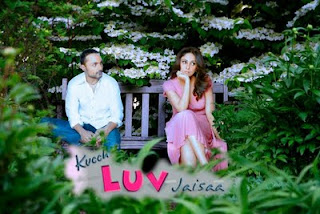 I have no idea how to review this film, because I’ve no idea what it was about. First, it shouldn’t have been called Kucch Luv Jaisaa. A more appropriate name would have been Kucch Film Jaisaa because ya, somebody went out there and cobbled together a cast, must have read something resembling a script to them, shot it and edited it down to a nearly two hour ‘film’. But what are they trying to say through it? Beats me!
Kucch Luv Jaisaa stars Shifaali Shah as Madhu, a rich bored educated home-maker in Mumbai whose life is even more dull than this film. She manages the house, gets taken for granted by her kids and hubby, until one day the dam bursts when he forgets her birthday. So she goes out and blows up some serious cash, buys a car and gets herself a glamorous makeover. At a small eatery she bumps into Raghav Passport (Rahul Bose), a crook who is on the run from the police. She is looking for some excitement, mistakes him for a detective, and asks if she can go along on his next assignment. He is still hurting from the betrayal by his girlfriend who gave him away to the police, and decides that some company won’t hurt. So off they go together.
This story of an unlikely friendship could have been something. But the writing is awkward, the situations unrealistic and the stodgy acting just makes it worse. It’s laughable to see Bose trying to do a tapori speaking the Mumbaiyya tongue in his deadpan style. The usually dependable Shah – who shows some spark in the early scenes – overdoes her effort to be cutesy and comes across in her interactions with the gangster as a ditsy dimwit. “Ooh paalak! Just look at the price!” she flutters at the sight of the leafy veggie in a store. Ooh, are you on a case? Ooh, will we actually follow the suspect all the way to wherever he goes? You mean all the way? Seriously, all the way? Yes, I’m not exaggerating – that’s how her dialogues go. Mr Reliable Sumeet Raghvan is clearly struggling with the lines dumped on him as he plays Madhu’s neglectful spouse Shravan. But by the end of it all, it’s hard to tell whether Madhu has actually fallen in love with Raghav or is just feeling bad for the guy, whether Raghav has fallen for her, and whether she likes / dislikes / loves / hates her husband.
With so much that’s wrong with the film, I guess there’s no point in dwelling on such things as continuity which has been treated as a minor matter by the production team. I couldn’t help but marvel at Madhu’s driving skills though. She’s got her hands firmly on the wheel of her car, and yet in one shot her hair is clipped back, in the next it’s flowing loosely around her face, in the next it’s pulled back again, in the next it’s falling on her shoulders, and the cycle continues.
The film is produced by the leading lady’s super-successful producer-director husband Vipul Shah (Singh is Kinng, Namastey London). A product this shoddy and a change in the spelling of her name are not what an actress of her caliber needs. The only thing I enjoyed about Kucch Luv Jaisaa is the prologue that plays out during the opening credits, showing us a newly married Madhu and Shravan who at first can’t get enough of each other till babies, her home routine and his work commitments eat into their relationship. What else? Well, the introduction to Raghav Passport includes Bose’s rippling biceps in silhouette. And? And nothing else!
Rating (out of five): 1/2
CBFC Rating:                       U/A without cuts
Running time:                        110 Minutes
Language:                              Hindi
Photograph courtesy: http://www.facebook.com/home.php#!/KucchLuvJaisaa
Posted by Anna MM Vetticad at 11:06 AM