Of course controlling fathers do exist in our country! Of course many rich parents do throw obstacles in the way of their kids when they hook up with poor folk! But what would you say if I were to tell you that in Rajshri Productions’ Love U … Mr Kalakaar, when the daughter of a millionaire businessman falls in love with a struggling artist, Daddy says to the boy: here’s a challenge - if you love my girl, take over as the managing director of my Rs 500 crore auto-spare-parts manufacturing company for three months, and keep it profitable; if you pass the test, you can marry her; if you fail, you’re out of her life? I kid you not! That’s precisely what Deshraj Diwan (Ram Kapoor) does when his only child Ritu (Amrita Rao) falls for Sahil Rastogi (Tusshar Kapoor). Not only does Sahil accept this absurd proposition, Ritu barely lets out a whimper of protest at being treated as the prize in this ‘test’ long past the era when Draupadi was gambled away by her husband! 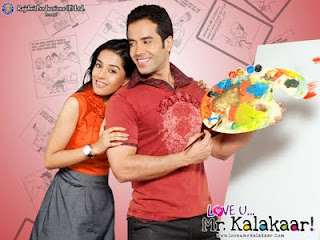 It’s the ridiculousness of the ‘test’ that I’m protesting against, NOT the conservatism of this family set-up. Rajshri’s films are known for being placed in ultra-traditional social milieus, but – like it or not – they are a reality in our country. So yes, there are warring fathers who would stand in the way of their children’s love (Maine Pyaar Kiya); yes there are young girls who get emotionally blackmailed into marrying their dead sister’s widower so that the grandchild gets a replacement mother (Hum Aapke Hain Koun!); and yes, there are millions of Indian couples for whom an arranged marriage means meeting each other just once before saying yes (Vivah). But at their best, films from this iconic production house have woven reasonably believable plots, charismatic stars and memorable melodies through these conservative settings to tell us entertaining stories.
Love U … Mr Kalakaar has none of these elements. Tusshar Kapoor’s usual deadpan style – utilised effectively by directors Krishna DK and Raj Nidimoru just recently in Shor in the City – is a downer here. Amrita Rao is a pretty girl who isn’t too bad as a performer but is yet to develop an arresting screen presence. Ram Kapoor playing her father is the most appealing of the cast. Madhoo as the aunt is charming and looks as fit in this film as she did back when she made her Bollywood debut opposite Ajay Devgn in Phool aur Kaante. And veteran Prem Chopra as the wise granddad is at least saved the embarrassment of mouthing lets-play-office-office lines peppered with management jargon that’s clearly meant to sound clever, but has as much believability as Kangna Ranaut and Abhishek Bachchan trying to do a C.S.I. in Game.
No doubt this is a film with good intentions and the trademark Rajshri quaintness. In a scenario where Hindi film heroes and heroines are bedding each other at the drop of a hat, there’s some charm in hearing Tusshar’s Sahil tell the girl: “Mujhe laga ki next step yahi (read: marriage) hai … Beech mein kya hota hai, mujhe iska koi andaaza nahi hai.” This could have been a film that warmed the heart with its story about an artist entering a big-bucks business and humanising it, seeing employees as people and not just resources. But the direction and script are too bland. Even the songs are forgettable, which is a crying shame considering that music has always been Rajshri’s strength. As for logic … please notice that I’m not even getting into what the board of directors were doing while the chairman of Diwan Enterprises appointed a rookie as the MD; I’m not even asking whether we are expected to believe that this is a Rs 500 crore sole proprietorship; because of course we as Hindi film viewers are not meant to care about details!
Don’t get me wrong: I’m not dismissing this film simply because it’s set in a world that’s alien to me. C’mon, I’m the sort of emotional sod who cried while watching Vivah starring Rao with Shahid Kapoor, even though every cell in my being rebelled against the traditionalism of the lead pair’s families! Take it from a cry baby like me: Love U … Mr Kalakaar is a bore. The only thing I remember about it is that Amrita Rao has an enviably tiny waist!
Rating (out of five): *1/2
CBFC Rating:                       U without cuts
Running time:                        154 Minutes
Language:                              Hindi
Photograph courtesy: http://www.rajshriproductions.com/lumk/