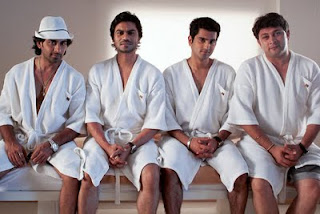 Every once in a while a film comes along that illustrates just how back-breakingly difficult it is for anyone to get a foot in the door in Bollywood. Gaurav Chopraa, Rohit Khurana and Rajesh Kumar are well-known faces in Hindi entertainment television. Yet here they are playing three-fourths of the leading quartet in a no-hoper called Men Will Be Men! What were they thinking when they signed up for this project?! Perhaps that it’s a way of getting a foot in the door in Bollywood?
The entire story of Men Will Be Men is contained in the title. Four colleagues (one married, one engaged, two single) lie to their boss and fly off to Pattaya to bed women: excuse me for dispensing with niceties, but the film isn’t particularly subtle so why should I waste my time? While at Pattaya, they all zero in on the same woman for reasons best known to them and she makes them run around in circles. By the time her motives became clear in the end, I was beyond caring.
Between the beginning and the end there is a lot of boredom and even more silliness. The heroine is introduced to us in a scene in which she emerges from a pool in a revealing swimsuit while her body glistens with strategically placed water droplets. Kindly note: a sexy bathing costume alone doth not a Priyanka Chopra make! There’s also a completely un-catchy motto that the men keep reciting to each other (something to the effect that whoever hooks the girl gets to take off with her) and an extremely irritating extra playing the part of a Thai hotel employee who keeps echoing their words.
Despite my kind heart, I can’t think of a single thing to say to recommend this film. On a personal note, ever since I resolved to review every single Hindi film released in 2011, whether small or big, I’ve come across some really strange samples of ‘cinema’ – but Men will be Men does not even fit into that category of films that are so bad that they end up being fun (for that, you need to check out my reviews of Impatient Vivek and Tum Hi To Ho).
I’ve read reports that Men Will Be Men was shot in seven days flat. With a zero-balance script like this, I don’t know if even seven years would have made a difference! But what boggles the mind is that this film comes to us from Red Chillies Idiot Box, the TV wing of Shah Rukh Khan’s Red Chillies Entertainment! I’m still rubbing my eyes in disbelief over that!
Rating (out of five): 0 stars
CBFC Rating:                       U/A without cuts
Running time:                        76 Minutes
Language:                              Hindi
Photograph courtesy: http://www.facebook.com/profile.php?id=663427844#!/menwbm
Posted by Anna MM Vetticad at 8:51 PM