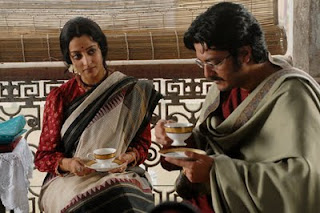 Kashmakash is the Hindi dubbed version of Rituparno Ghosh’s Bengali film Noukadubi. It is one of those old-world tales that makes you long for a more languorous life away from the Internet, cellphones and a packed appointment diary. It’s also a reminder of a literature from another era where grandeur did not necessarily imply epic transcontinental adventures, but could be found in the simple joys and sorrows of life.
The film is based on Rabindranath Tagore’s story Noukadubi (Boatwreck). It’s set in 1920s Bengal and brings to us Hemnalini and Ramesh, a young couple in love despite their class differences. He is a lawyer of sparse means. She is from a progressive wealthy family, a music aficionado who is blessed with a lilting singing voice and a loving, liberal father. One day Ramesh is emotionally pressured into marrying another woman. When he leaves his village after the ceremony, a storm washes his boat ashore. He recovers consciousness, to find a young bride out cold beside him. Can he ever find happiness with the new girl? How will Hemnalini salvage her life? How will they resolve the case of mistaken identity that became their undoing?
Ghosh tells this story in precisely the way his characters must have lived their lives: in a quiet, unhurried fashion. The cinematography and music are in perfect harmony with the mood of the film. There’s also a richness of detail in the settings and costumes. Hemnalini’s home is luxurious and well-appointed; Ramesh’s house is almost bare. Hem wears expensive outfits and shelters herself with delicate parasols; Kamla is the bride swathed in ornaments. The other significant character in the film, Dr Nalinaksha from Benaras lives in a palatial house; but Hem’s Calcutta home feels more lived-in, warmed by the affections of its residents for each other. These backdrops provide an ideal playing ground for Ghosh’s cast, all of whom are excellent and well chosen. Raima Sen (Hemnalini) is a fine actress with a beauty and regal bearing that fits well into an early 20th century story. Her sister Riya, whose work I haven’t liked in the past, is absolutely apt for the semi-literate Kamla. I can’t tell whether this is a result of inspired casting (where the actor’s real-life personality simply happens to match the character she’s playing) or if Ghosh has managed to bring out the actor in her, but either way, it works. The dubbing artiste’s high-pitched, breathy voice is not immediately attractive, but is effective in conveying Kamla’s girlish diffidence and insecurity. With Kashmakash, Hindi film audiences will also get to see the handsome Bengali actor Jisshu Sengupta in a leading role. Sengupta brings to Ramesh’s character a vulnerability and pathos that is heart-wrenching.
Producer Subhash Ghai has chosen well for his first foray into Bengali cinema: Rituparno Ghosh’s Kashmakash (Noukadubi) is a lovely, under-stated work of art and it’s great to see a major Mumbai producer backing a non-Hindi film. Ghai has clearly not taken this project lightly: the Hindi dubbed version even boasts of lyrics by Gulzar. I have no argument against a film being dubbed well into another language, however much some hard-core film buffs may oppose it. Personally though, I’d have preferred to watch the original Bengali film with English subtitles. Unfortunately, no such version is being released in Indian theatres: you can either catch it in Bengali without subtitles in West Bengal or in Hindi outside the state. I’m also extremely uncomfortable with the fact that Ghosh and Ghai were not able to find a meeting ground on the matter, as a result of which this Hindi version has been translated, dubbed and edited down by 30 minutes under Ghai’s guidance, without the director’s involvement at all.
That’s a matter for a long discussion in another space. But right now on this review blog, looking at the Hindi dubbed version as a standalone film, there is much to praise: the Hindi translations by Preeti Sagar have been done in such a manner that there is very little mismatch between the lip movements of the actors and the dialogues being delivered by the Hindi dubbing artistes. That comes as a relief almost two decades after the incongruous Hindi dubbing of Mani Ratnam’s Tamil films Roja and Bombay. The Hindi voices in Kashmakash too are a match for the actors’ personalities.
If this were a modern-day story I might have been uncomfortable with the manner in which all the loose ends get neatly tied up through a couple of highly improbable coincidences in Kashmakash. But here, the plot twists simply hark back to an earlier style of writing and to some of my favourite 18th and 19th century classics where happily-ever-afters were always rounded off. Besides, this film is not about the climax alone, but about the journey there. It’s about the interplay of two strong women and the supportive men in their lives. It’s about the curve balls that life throws at you and how sometimes, life sorts itself out. I want more where this came from.
Rating (out of five): ***1/2
CBFC Rating:                       U without cuts
Running time:                        125 Minutes
Language:                              Dubbed in Hindi from Bengali
Photograph courtesy: http://www.muktaarts.com/filmography/kashmakash.asp
Posted by Anna MM Vetticad at 3:26 PM