I was the sort of child who was afraid of the dark, who used to imagine that a ghost would emerge from the commode, that there were spirits under my bed and figures hiding in the patterns of the mosaic tiles on the floor. Kids, I tell you! But I have no explanation for the fact that as a rational grown-up, although I do not believe in ghosts, somewhere at a sub-conscious level that I hate to acknowledge, I get unsettled by ghost stories. 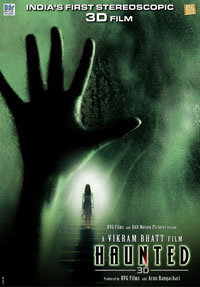 So it’s confession time: I kept a light on in my room the night after I watched Vikram Bhatt’s Haunted. It’s silly of me, of course, but it made me realise that despite all my reservations about this film, it had struck home.
Haunted is a horror film about a young real estate agent finalising the sale of a house when strange things start happening in the night. He discovers that a female occupant of that manor 80 years earlier was assaulted by her lecherous teacher. In trying to protect herself, she ended up killing the man who returned as an evil spirit to exact a terrible revenge on her. Now our hero must free the property of its spectres and restore peace to the troubled soul who once lived there. How he attains that goal is something I will not reveal here.
The film stars Mahakshay nee Mimoh Chakraborty, son of Mithun Chakraborty, making a return to the big screen with a new name and less baby fat on his person than he possessed on debut. He plays the property dealer in Haunted while the girl from the past is television’s Tia Bajpai, and Arif Zakaria takes on the role of her lustful guru.
First things first, the 3D is top-notch and world class. As always, those heavy glasses left a dent on my hapless nose. But the usual dimness that is the bane of all 3D films works in favour of Haunted, contributing to the eeriness that pervades the film. And unlike a number of recent Hollywood films in which the third dimension added little to the experience (case in point – Tron: Legacy), in Haunted it was effective enough to make me pull back in my seat in fright more than once. Please don’t remind me of that cobra that lunged at us from the screen!
So yes, the film is scarey in spite of the many clichés it employs! The first time the evil spirit makes an appearance is petrifying as are many other moments. On the downside are the loudness of the sound effects and music at several places. Why do most Bollywood film makers these days feel the need to raise the background score so many notches in such an obvious fashion in horror films? Hollywood too is often guilty on that count. Haunted didn’t need these contrivances, though to be fair to the film, its aspiring-to-be-menacing noises are not one-tenth as screechy or distracting as they were in that awful series of horror flicks such as 88 Antop Hill that emerged from Bollywood around the same time as Ram Gopal Varma’s much more intelligently crafted Bhoot.
Overall though, Haunted could have been way better than it ends up being. Much of this has to do with the fact that director Vikram Bhatt resorts to too many horror flick formulae here: ghosts with glazed eyes, a possessed woman flying through the air while another gets elevated, and a Christian priest with a crucifix (he even says “main tumhare liye prayer karoonga” because Hindi film Christians just don’t seem to know the word “prarthana”). And really, did we have to be shown a spirit’s tongue growing in length to fondle the heroine’s neck?! Ewwwww!
Pulling the film further down is the absolute lack of charisma of the leading man whose face has none of the sensitivity or agility of his illustrious father. The songs are not hummable or necessary. The time travel and some of the mumbo-jumbo towards the end could have been better explained too. No no, I’m not looking for logic in a spook saga, just a better pretence at it. If you’ve seen the film, do answer this question for me: why hadn’t she washed the blood off that locket? Considering that surprise is of paramount importance, it also seemed pretty foolish to repeat some devices that worked well on their first appearance in the film.
Still, if you are a horror junkie, I’d recommend this film to you despite the riders. Don’t go comparing it to Hollywood classics in the genre or to our home-grown gems like Mahal, Bees Saal Baad and Madhumati. These days, the Hindi film industry rarely produces half-way decent horror films, and Haunted is head and shoulders and eyebrows above most, including Bhatt’s own terrible 2010 film Shaapit! Considering that a significant element in Haunted involves a woman being raped by a spirit, it’s also important to point out that it’s not obnoxious, sensationalist and offensive in the manner of that Tabu-starrer Hawa in which a phantom wind kept ravaging the heroine’s body while the camera worked hard to titillate the audience.
With better editing and a more inspiring hero, Haunted could have been very good. As things stand, it’s frightening despite all its flaws, and I enjoyed that.
Rating (out of five): **1/2
CBFC Rating:                       A without cuts
Running time:                       140 Minutes approximately
Language:                             Hindi


Photograph courtesy: http://en.wikipedia.org/wiki/Haunted_(2011_film)
Posted by Anna MM Vetticad at 10:28 AM