REVIEW 37: SHOR IN THE CITY


First let me get this out of the way: 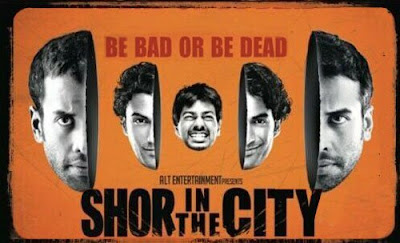 Okay, so I’m having a little fun out here, but you do get my point! Ramamurthy – Indian origin star of the American serial Heroes – is a hottie. It’s clear that he’s also a very discerning man since he’s chosen to make his Hindi film debut in a project as unusual and unexpectedly entertaining as Shor in the City.

Ever since Ram Gopal Varma broke new ground with that amazing gangster flick Satya in 1998 and followed that up with the equally compelling Company, Bollywood has been hooked on Mumbai’s underbelly. Shor in the City visits familiar ground but does so in a delightfully unfamiliar fashion.

The film tells three partially intersecting stories. Tilak, Ramesh and Mandook are friends who are up to no good. Mandook is a loose cannon without a conscience. Ramesh has a head on his shoulders in spite of his vagabond ways. And Tilak, the most reluctantly dishonest of them all, is in the pirated books business. Far removed from their murky world is Abhay, an NRI who has returned to India to run a small enterprise and comes up against a wall of corporate inefficiency, institutional corruption and underworld interference. Somewhere in between is Sawan Murthy a.k.a. Savvy, a cricketer struggling to raise money to bribe a selector, while his girlfriend is paraded before prospective grooms by her family.

What sets Shor apart from the numerous other films on life in Mumbai is the inoffensive and seamless blend of pathos and humour in the storytelling style. So many of the clichés we’ve come to expect in such films are missing here. There are abuses galore, but conversations are not peppered with those by-now-not-at-all-shocking-and-in-fact-quite-irritating words “moothna” and “hagna”; nor once are we shown an image of a man wetting his pants in fear. What we get instead is a twist at every turn, so that just when you’re expecting to shed a tear, the film makes you smile, and just when you are expecting to laugh, you’re shocked out of your wits instead.

Directors Raj Nidimoru and Krishna DK (who earlier made 99) have also wisely steered clear of most actors we’ve almost come to expect in films about the dodgy side of Mumbai. I have just one word for their cast: wow! Okay, grant me two words please: double wow! Pitobash Tripathi is brilliant as Mandook who thinks nothing of soothing his wounded ego and having a spot of fun by pulling a gun on a man going about his business on a toilet commode. Nikhil Dwivedi (earlier seen in My Name is Anthony Gonsalves and Raavan) is smooth and easy as the far more level-headed Ramesh who is startled out of his wits at the discovery that his friend Tilak is reading a book! The film’s producer Ektaa Kapoor’s brother Tusshar Kapoor as Tilak is not as top-notch as these two, but he’s still the best he’s ever been, in a nicely understated way. The trio have the benefit of the most attractive of the three stories in Shor, but Sundeep Kishan as Savvy shines even without that advantage: he is both good-looking and an absolute natural in front of the camera as are Girija Oak playing his girlfriend Sejal, Hottie Ramamurthy and Radhika Apte who is the semi-literate Tilak’s college-educated wife (Apte, incidentally, also stars in this week’s other film release, Onir’s I Am).

The weak link in the chain is former Miss Great Britain Preeti Desai who is cast as the girlfriend of Abhay (Ramamurthy). Her awkward dialogue delivery kind of blunts the effect of Abhay’s frustrations which every Indian would relate to. ‘Serious’ cinema buffs may argue that there was no need for that brief scene in which Ramamurthy makes a bare-chested appearance wearing nothing but a white towel around his waist. But milord, may I point out that it takes nothing away from the film!

Okay, so I’m getting carried away with myself again. But seriously, pretty much all the elements in Shor in the City are just right: The script is tight. The camera team keeps it real and simple. A couple of the songs are catchy. The background score is used to excellent effect. The sound effects editing is near perfect. And everything comes together to give us a film that’s a tragi-comic look at life in Mumbai. Part of the tragedy is how we as viewers laugh when we watch scenes that should in fact hurt us, perhaps because we are resigned to the corruption that pervades our lives. Like the expat who finally comes to terms with the reality of Mumbai and confidently tells his auto driver to enter a one-way street because he knows his cash will silence that vigilant traffic constable. Like the frustrated businessman who pulls a gun on a goon, and says to him: “If you can get away with it, I can too.”

But it’s the little touches that make Shor in the City such a wholesome experience: Savvy’s pronunciation of the word “Hyderabad” in precisely the way that a Mumbai-based south Indian might say it; the cricket selector’s Mumbaiyya intonation when he says “mind-blowing”; Tilak telling his wife, “Ek saal baad ek badi gaadi khareed lenge – Nano”; the way she nods her head just so, when she meets her husband’s employee; the manner in which a common man caught in a bank robbery asks pathetically, “Woh hazaar rupye jo har maheene SIP mein daalta tha, woh gaya?” Shor in the City is so real, that it feels more like fact than fiction.
Rating (out of five): ****
CBFC Rating:                      U/A without cuts, several swear words have been beeped out
Running time:                        111 minutes
Language:                              Hindi with English