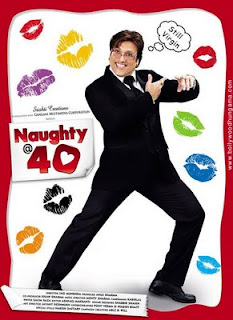 No, I’m not quoting from Govinda’s latest film. I’m just trying my hand at writing lines that are similar to the sort of cheesy, over-done dialogues populating half of Naughty @ 40. They’re the kind of lines that were hilarious back in the 1980s when we were first introduced to Govinda, lines that have now become so tired and trite that you can anticipate them from a mile in any film starring this still-remarkably-funny man.
Which is a pity because here is an actor who still has so much to offer. Even in a silly film like Naughty @ 40 (originally titled Excuse Me Please), there are scenes in which I found myself giggling helplessly at his brilliant timing and wit. But for every genuinely rib-tickling conversation that the film has to offer, there’s a “samjha samjha ke” type stringing together of formula-ridden sentences that completely kills the mood. Why oh why can’t Bollywood write dialogues that do justice to Govinda’s immense talent?
Very briefly, here’s the story. In Naughty @ 40, Govinda plays a 40-year-old bachelor in London who has never had sex. Harvinder/Harry is a shy chap whose nocturnal activities are limited to the affliction of sleepwalking, and while he’s at it he tends to follow beautiful women around in the dark. This leads to comical consequences, of course. Traumatised by the discovery that his son is a virgin, his father Laxmi Narayan Kapoor a.k.a. Allen Kapoor (Anupam Kher) takes him to India in search of a bride. Harry ultimately marries Gauri (Yuvika Chaudhary) but tragically for him, “var” banke bhi woh “vargin” rehta hai because Gauri is too young and too innocent to understand a grown man’s sexual desires.
The film takes passing inspiration from the Hollywood offering The 40 Year Old Virgin starring Steve Carrell. But hard-core cineastes will more likely recall in this storyline Rajshri Productions’ 1971 film Uphaar with Jaya Bhaduri and an even more striking resemblance to the 1980s Hindi film Anubhav starring Shekhar Suman as a frustrated groom, Padmini Kolhapure as the naïve bride and Richa Sharma as the village temptress. Unlike Suman in Anubhav, Govinda does not lend this film a sleazy touch which is saying quite something for a man who did plenty of cringe-worthy roles in the 1990s. Thankfully, this is a Govinda who has matured and seems to know where to draw the line in a bawdy comedy.
That’s the good thing about Naughty @ 40. The strange part is the writer’s schizophrenic output. If you can suffer the insufferable clichés in 50% of the dialogues, you will find that the other 50% (yes, I’ve measured with mathematical precision!) are quite ridiculously delightful. Note the scene in which Govinda is comparing the sexual drought in his life to the mating habits of camels, elephants, flies and dogs. Or take the utterly enjoyable puerility of gems emerging from the mouth of his father-in-law played by another great comedian, Sanjay Mishra. The old man eats only the fillings of samosas while discarding the “baahar ka” covering because his doc has told him to avoid “baahar ka khana”.
Mishra is not the only interesting supporting actor in this film. Pretty much every small role is played by a talented comedian though I wish someone would stop giving Shakti Kapoor repeated opportunities to be repugnant on screen! Yuvika Chaudhary plays Harry’s vapid wife, a role that Ayesha Takia was originally cast in. Chaudhary puts in a shrill performance but shows a flash of comic potential in her introductory scene in which she mimics her father (Rakesh Bedi) superbly.
Don’t get me started on production values in a film where little matters like continuity are dispensed with, a child actor speaks in a voice that has so obviously been dubbed by an adult and most characters from the first half simply disappear in the second. But all this is incidental because Naughty @ 40 is primarily about Govinda. Back in the 1980s and ’90s, Govinda was a hot young star who delivered a string of superhits that showcased his acting and dancing skills. But then he did himself in by choosing questionable projects, letting himself go physically and acquiring a reputation for tardiness that scared off producers even though he’s almost universally considered a really nice guy. What a tragedy! This is a man who can kill you even with this offensive description of a transvestite in Naughty @ 40: “Ladki upar se aayee thi, neeche se aaya tha.” And when he danced to the song Thoda main adjust karoon, thoda tum adjust karo, despite the expanded waistline I was reminded for the nth time in my life that even today, there aren’t many men in this industry who can dance quite like Govinda! Damn you Govind Ahuja, how could you do this to yourself … and to us?!
Rating (out of five): **
CBFC Rating:                       A with cuts (The Censors got the film maker to remove approximately 90 seconds of a scene in a nightclub in which Shakti Kapoor’s head first lands in the cleavage of a busty woman and then on the crotch of a gay man)
Running time:                        110 Minutes
Language:                              Hindi
Photograph courtesy: http://www.facebook.com/home.php#!/pages/Naughty-40/144546385607866