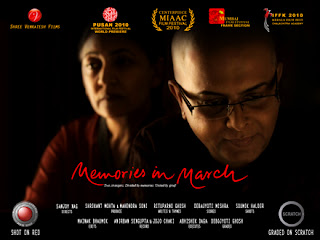 The producers of Memories in March must be made answerable for why they would support a gutsy project such as this one and then not bother to promote it. How many of you were aware of this film’s existence before you saw this review? And then, if it fails at the box-office, what will we hear? That Indian audiences are not interested in anything except masala or that Indians are uncomfortable with films featuring central characters who are gay. That’s so unfair – Indian audiences are not to blame if you make a sweet little film and then don’t bother to spread the word about it!
Memories in March is the story of a mother re-discovering her son after he passes away. Arati Mishra (Deepti Naval) flies to Kolkata from Delhi when she receives the news of Siddharth’s death in a car accident. Sid was a young, bright, up-and-coming executive in an ad agency whose life is cut short by one night of drunken driving. The film remains with Arati during her three days in Kolkata where she stays at Siddharth’s flat, visits his office, meets his colleague Sahana Choudhury (Raima Sen) and his boss Ornob Mitra (Rituparno Ghosh). Through them she realises that she didn’t, after all, know everything about the child she loved so much.
So when a mother learns that her late son was gay, what’s worse in her eyes: the loss of the boy or the loss of her image of what he was? Naval brings a remarkable maturity and restraint to the role of a parent who is clearly uncomfortable with the idea of homosexuality and yet can’t be harshly labelled as a homophobe. That’s the wonderful thing about director Sanjoy Nag’s handling of the subject and Rituparno Ghosh’s writing: at no point is Memories judgmental about Arati though that could have been a temptation since the film takes a sympathetic view of a homosexual person’s fear of coming out to his family. Yes Arati does call it an “abnormality”, and yes she does accuse her son’s lover of seducing him, but is her reaction any different from what you might expect of any city-bred, 50-plus Indian mom who has never been exposed to alternate sexualities? So is Arati prejudiced or innocent? Witness her artless reaction to the discovery of a packet of condoms among her son’s belongings: if he used birth control, then he certainly couldn’t be gay, she concludes. That is one of the many heart-warming scenes in this film.
I’m not saying much more about the story here for fear of giving away details that it would be nice for you to chance upon yourself. All I will say is that it’s lovely to watch Arati’s transition from her initial revulsion to reluctant acceptance of Siddharth’s reality. Rituparno Ghosh enriches that journey with his uncannily real portrayal of Siddharth’s gay boss. Ornob’s physicality fits many of the stereotypes that exist in our minds of what a gay person would be and yet, he is not a caricature. As the female colleague who harboured feelings for Siddharth, Raima Sen chips in a very natural performance. I have no idea why this girl has not made it big in films – she’s beautiful and talented and a joy to watch.
Memories in March is about a mother-son bond, about homosexuality, about how that office for which we neglect our family will give away our cubicles in a jiffy while we remain irreplaceable in the lives of the very family we neglected for work. But most of all, the film is part of an interesting expedition that Indian cinema has embarked upon in its exploration of homosexuality as a theme: it’s not the first, and hopefully won’t be the last, but it’s certainly one of the best. Onir’s My Brother Nikhil was a simple and beautiful film about a gay man battling HIV and social opprobrium. More commercial films like Kal Ho Na Ho and Dostana too have their place in easing mainstream, conservative Indian audiences into the idea of homosexuality. Those who were offended by these two films should consider the obscene amount of bigotry that was packed into Karan Razdan’s Girlfriend, to understand the difference between laughing at someone and laughing affectionately with someone.
About a decade back, the late Nishit Saran had made a film called Summer in my Veins which was a feature-length home video about the moment he came out to his mother. It was moving no doubt, and pathbreaking, but one thing that defied believability in the film (at least for me) is the ease with which Nishit’s mother accepted the information. “Mom I’m gay,” was met with equanimity and an unblinking okay. In that sense, Memories in March feels more real.
Perhaps this film could have done without the lengthy discussion about fish being caged in an aquarium. And I certainly don’t understand why costs had to be cut by superimposing a car against footage of a busy road passing by – that looked tacky. But when you look at the larger picture, these feel like minor quibbles. Memories in March has some lovely music to back the story, but what moved me much more than the voices of professional singers in the background was watching Arati sing Yeh raatein yeh mausam nadi ka kinara yeh chanchal hawa in a borderline tuneless voice when Ornob tries to recall the song that Siddharth loved so much. Like so much else in this film, the scene was funny, it was sweet, it made me smile, it made me cry, and it was totally worth my time.
Rating (out of five): ***1/2