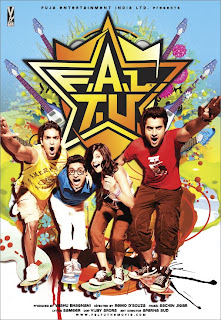 F.A.L.T.U. is what 3 Idiots might have been if it was less refined & less well written. But F.A.L.T.U. is also a reminder of what 3 Idiots could have been if the lead trio actually looked like college students.
Choreographer-turned-director Remo D’souza’s F.A.L.T.U. is one of those films that I confess I enjoyed in spite of the ludicrousness of the premise and the triteness of some of the dialogues. In spite of myself, I couldn’t help but smile through F.A.L.T.U. because D’souza brings a certain infectious energy to this film about teenagers who barely manage to pass school and are rejected by every college in their city. To silence their parents, they create a website for a faux college and print out acceptance letters for themselves. So far so good. But whaddyaknow, mom and dad are so thrilled at the news, they want to visit the college. Fear not, the kids’ wheeler-dealer friend has a decrepit building at his disposal, which they sweep, swab, wash, scrub, mow, dust, scrape and paint – in short, they convert those ruins into a shiny, brightly coloured educational institution complete with classrooms, notice boards, a swimming pool and a sign outside for Fakirchand and Lakeerchand Trust University. Now all they need are some fake students and a fake principal for a day. Their wheeler-dealer buddy (Arshad Warsi) promises to arrange for actors who’ll play students, and hires a real teacher (Bajirao / Riteish Deshmukh) to be a phony principal. But who are the hundreds of teens who throng the corridors on the opening day? They’re certainly not actors! I won’t reveal anything further!
In a film like this, I suppose there’s no point in asking some perfectly logical questions. Like: how could our three badmaashes manage to transform that building with their bare hands (and that too in a single day as one character informs us)? How on earth did they cough up the money for this enterprise? Who is this mysterious Google who contributes cash in lakhs to this venture? And how on earth did the college website enrol students when no one was operating it?
If the writer had been a little less lazy with his imagination, he may well have managed to plug these loopholes, and still served up a fun script. But perhaps that’s asking for too much in a Hindi film industry that has shown little respect for its audiences in recent years. Besides, the youngsters filling the theatre where I watched F.A.L.T.U. didn’t seem to mind too much.
Perhaps it’s because of the youthful appeal of the lead trio who are all in their 20s. Perhaps it’s also because producer Vashu Bhagnani has been wise enough not to repeat the mistake of placing the burden of a single-hero film on his son’s shoulders. Jackky Bhagnani’s debut film Kal Kissne Dekha failed miserably. In F.A.L.T.U. he is just one of a cheery gang, and the camera does not rest demandingly on him in every single shot. Jackky does a fair enough job of playing Ritesh Virani, a junk dealer’s son who would rather ogle women at a lingerie store than man his father’s kabaadi shop. Angad Bedi (Bishen Singh Bedi’s cricketer-turned-model-turned-TV-host son) is quite impressive as Nanj Nair who is nothing like the cliched aiyyayo-Hindi-film-idea of a ‘Madrasi’. Ritesh’s Pappa and Nanj’s Appa are concerned about their kids’ careers, but Puja Nigam (former Miss India Puja Gupta, less impactful than her co-stars) must deal with a father who thinks there’s no better future for her than the one he could find on a matrimonial website. The trio have a nerdish buddy Vishnu Vardhan who cries because he marginally falls short of a 95% score, but whose secret dream is to be an actor. Chandan Roy Sanyal (who we earlier saw in Kaminey) plays Vardhan without all the trappings of a typical Hindi film student-genius – sure Sanyal wears thick glasses but his Vardhan is still a fun and delightfully funny chap. He is the pick of the F.A.L.T.U. cast for me.
The main players are aided by Sachin-Jigar’s rambunctious sound track, some brilliant choreography, a lovely supporting cast playing their parents and praise-worthy attention to detail in the casting of F.A.L.T.U.’s crowd of students: someone tell me the name of that actor playing the Malayali kid – he just killed me!!! Arshad Warsi is wasted on the margins of this laugh-fest, Boman Irani over-acts in a brief appearance, but Riteish Deshmukh in a tiny role shows us once again that he’s one of the most under-rated comic actors in the industry. Watch him teach his students the eight time tables to Munni badnaam hui.
It’s moments like these that helped me forget the patchiness of F.A.L.T.U. which swings between being brisk and not, between being genuinely funny and falling terribly flat: I mean, Arshad Warsi is called Google because, well, that’s where you can find anything you search for, get it dummies?! And Bajirao says that students with low marks are “not useless” they are “used less”. Oh jeez! Post-interval F.A.L.T.U. also looks like a string of music videos. And in case we miss a point, it is repeatedly repeated for us dimwits in the audience. So not only does Pappa point out that F&L Trust University stands for F.A.L.T.U. but the letters flash on our screens. Just in case we didn’t get that this is a film about the flaws in our education system, the message is rubbed in with a looong conversation between Google and Bajirao, then again with Ritesh’s kabaadiwala Pappa equating the students of F.A.L.T.U. with kabaadi that doesn’t realise its own value (yes seriously, he does that!), and then again with some lengthy speechifying in the climax.
Now if Remo and his team had not under-estimated their audience, this could have been a special film. As things stand, it’s a highly flawed, uneven, light-hearted funfest. Well, at least it’s not pretentious and thank goodness for that.
Rating (out of five): **1/2