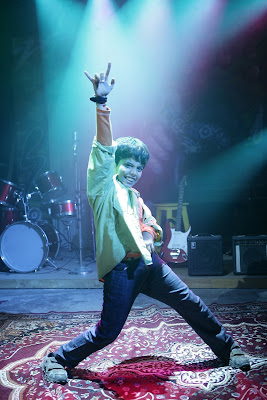 I think I’d like to start by saying that from this day forward, I’ve got my fingers and toes crossed for Darsheel Safary. He is such a natural in front of the camera – no over-acting, no irritating precociousness, just being. I do hope he makes the transition from cute kid to handsome man, and gives us one of those rare instances of a child star growing up to be a significant adult star too. We haven’t had one of those in Hindi films since Urmila Matondkar, have we?
This, of course, is precisely why young Safary – star of Aamir Khan’s Taare Zameen Par – deserves so much better than Zokkomon. The film starts off seeming like a relative of Harry Potter, then takes off in an interesting and unexpected direction as the antithesis of a superhero film, but ultimately sags under the weight of its lacklustre script and lackadaisical direction.
The story goes like this. Safary plays Kunal, an orphan who is plucked out of a boarding school he loves and transported to the town of Jhunjhun Makadstrama where his rich and corrupt uncle Deshraj (Anupam Kher) runs a school in exploitative Dickensian style. Deshraj keeps the local people under his thumb by encouraging their superstitions and blind faith with the help of a dishonest baba. One day Deshraj stages Kunal’s death so that he can inherit the money left to the boy by his late parents. Kunal returns of course, but I won’t say how.
The film is unusual in the sense that Zokkomon is not literally a superhero, but the product of a brilliant scientist’s association with a regular human child. The aim is to show the people of Jhunjhun Makadstrama how science can perform seeming miracles through logical means. A plus point there in favour of the story by Satyajit Bhatkal, Lancy Fernandes and Svati Chakravarty Bhatkal. The casting director of Zokkomon too needs to be complimented for picking a bunch of child actors who are completely not self-conscious before the camera. Their innocence and charm carry the film through although time is spent on developing only one character among them – Kunal.
It’s this slack scripting that pulls the film down, in addition to repeated insertions of dull songs and glaring plot loopholes. At one point, Kunal tells his friend Kittu didi that because of Zokkomon’s appearance in Jhunjhun Makadstrama, the people have begun to shed their “andh vishwaas”; this scene comes just minutes after Kittu shows a painting of Kunal to townsfolk who scurry off in fear after telling her that the kid is now a ghost. Contradiction, no?
The scientist who turns Kunal into Zokkomon is also played by Anupam Kher. The make-up is good but his back story seems fuzzy to me. And though Kher is a fine actor, I couldn’t understand the purpose of casting him  in a double role instead of getting two actors to play those parts. If there was a profound point being made here that good and evil are two sides of the same coin, I’m afraid it was lost on me.
In any case, such profundities and the moral of the story are more likely to be grasped by tweenagers, yet the bulk of the film seems targeted at a much younger audience. The teeny tots in the hall where I watched Zokkomon let out whoops of delight every time Zokkomon went zipping around in the air, and at scenes like the one in which a small-town English teacher writes “teacher goes fartee” on a blackboard when he means “teacher goes for tea”. 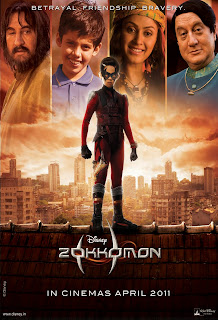 So I suppose I’d recommend Zokkomon to children of eight years and below who are likely to be undemanding about the haziness in the film’s plot developments, while enjoying its special effects which are better than what we see in most Indian films. I must, however, state for the record that the caped hero’s exploits in Rakesh Roshan’s Krishh were head and shoulders above Zokkomon although Roshan didn’t have the backing of a global major like Walt Disney Pictures which has produced Zokkomon.
Note for parents: I met a tiny fellow at the multiplex’s coffee counter during the interval. “Are you enjoying Zokkomon?” I asked. He hid his face behind a huge popcorn case and replied, “Mela favoulit film hai.” The kid’s dad rolled his eyes and said: “He’s enjoying himself but I’m not. It’s just the halfway mark and he’s already calling it his favourite. We’ll have to bring him for it again, but I’m certainly not coming a second time. For the next show, his mother can come.” Vishal Bhardwaj showed us with Makdee that it’s possible for Bollywood to make a children’s film that knows its target audience but doesn’t underestimate their intelligence. With animation classics like The Lion King and Aladdin back home in the US, Disney have shown that it’s possible to make a children’s film that kids and parents alike can love. Zokkomon should and could have been much more than a film for just under-eights.
Rating (out of five): **
CBFC Rating:                       U without cuts
Running time:                        109 Minutes
Language:                              Hindi
Posted by Anna MM Vetticad at 10:43 PM