In the Book of Exodus in the Bible, Moses asks God what his name is. God replies: “I am who I am.” I was reminded of that passage as I watched director Onir’s film this week. I Am is a quartet of short stories: I Am Afia, I Am Megha, I Am Abhimanyu and I Am Omar. The protagonists are not divine, but there is an attitude that pervades each of their stories: I am who I am and you need to deal with that because despite my confusions and crises, I am comfortable with myself. 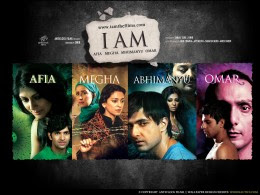 First there is Afia (Nandita Das), a young divorcee in Kolkata who wants to have a baby through artificial insemination. We then move to a community that Indian society in general, and Indian cinema in particular, rarely bothers with: Kashmiri Pandits. I Am Megha is about a Kashmiri Hindu girl (Juhi Chawla) who returns to Srinagar for the first time since her family was forced to flee. Story #3 is set in Bengaluru where a seemingly carefree and self-centred Abhimanyu (Sanjay Suri) battles memories of being sexually abused as a child. In the final chapter we meet a gay man in Mumbai whose fear of coming out to his family leads to a horrific situation.
Onir earlier directed My Brother Nikhil, Bas Ek Pal and Sorry Bhai. For me personally, Bas Ek Pal is the film in which he strayed away from his innate ability to tell realistic stories in an apparently effortless fashion. In I Am, he returns to his strengths.
There’s nothing wishy-washy about any of these accounts. Afia wants a baby but not a man in her life. Abhimanyu confronts his mother: did she genuinely not realise that her husband was violating her son? I Am Omar shows a gay man being raped in a way that won’t fit the conventional definition of that crime. And most courageous of all is the position that Onir takes on Hindu-Muslim tension in Kashmir. At one point, Megha’s childhood friend Rubina (Manisha Koirala) explodes in anger because the army conducts routine checks on their house since her brother is a surrendered terrorist. Later, listening to Rubina’s complaints about the situation in Kashmir, Megha retorts: “Kis baat ki problem hai tumhe? Is the army treating you unfairly? Is India taking away your rights? Or is it because of the constant reminders that your brother is a trained mujahideen?” It’s a brave question for a film to ask in an India where we have become slaves of misplaced notions of political correctness, and where a sympathetic stand in favour of one community is often assumed to be anti- the other. In I Am, Rubina in turn asks a question that had never occurred to Megha: “Imagine what it might have been if you had stayed back and I had managed to leave?” Yes, despite all the misfortunes that befell her family, would Megha want to trade places with this beautiful young girl who is stuck in a state where life has come to a standstill and concertina wire is more visible than human beings?
Megha’s story, incidentally, is inspired by the experiences of actor Sanjay Suri who has produced I Am with Onir. Suri’s family left Kashmir in 1990 when his father was killed by terrorists. Among the many things for which Onir needs to be applauded is the decision to draw from a man’s experiences, yet tell the story of two women in a terror-torn state since it is women who suffer the most in conflict situations. Kudos is also called for since Onir and Sanjay crowd-sourced funds for this film through the online social media.
I Am is hard-hitting and unapologetic about its views. It’s beautifully acted by every single member of the cast except one star who I will discuss later in this review. And while it’s realistic, it is never dull. The songs don’t intrude on the narrative. And Onir tells the four stories with a light touch that takes nothing away from the seriousness of the issues he’s raising.
Many things are hinted at without being underlined. There is that passing suggestion of an attraction between Afia and the man whose sperm could give her a child. There’s the fact that only much after watching the film did it occur to me that two out of its four protagonists are probably Muslim. I Am doesn’t make a big deal of Afia or Omar’s religious identity unlike most Bollywood films where Muslim characters are placed in stories to make a point … either about shayari or the nawabi way of life or secularism perhaps. Rarely do you come across a Muslim who happens to be there as just another human being in the film.
Then there is the easy manner in which language flows in I Am. Bollywood usually struggles to write dialogues the way multi-lingual Indians speak. English-school-educated characters in particular are generally given lines that are written – and delivered – in an ungainly, unnatural fashion. But the people in I Am switch between Hindi, English, Bengali, Kashmiri, Kannada and Marathi in precisely the way you and I might.
The only sore point for me in the entire film was the casting of Rahul Bose in the fourth segment. Bose is a limited actor whose immobile face contrasts sharply with his talented co-stars here. I Am Omar is a chilling story, tough to watch because of its stark portrayal of sexual exploitation, but Bose’s performance dilutes much of its impact. Kashmiris in the audience may also fault Manisha Koirala for her accent but Megha and Rubina’s story is so well-acted and so rare that I, for one, have already forgiven her.
So there you have it: I Am is a sincere and gutsy film. Don’t let my praise mislead you: this is not a grand epic, it’s small and simple and that’s why it’s lovely. Take a bow Onir.
Rating (out of five): ****
CBFC Rating:                        A without cuts. Some swear words have been beeped out
Running time:                        110 Minutes
Language:                              Hindi, English, Kashmiri with a bit of Bengali, Kannada, Marathi
Photograph courtesy: http://www.iamthefilms.com/downloads

Posted by Anna MM Vetticad at 1:13 AM