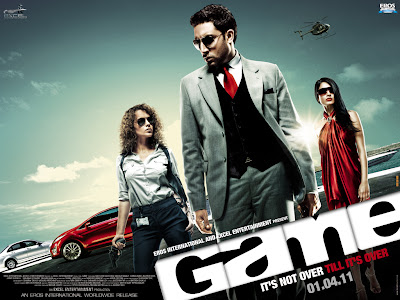 But there’s more to Game than its hai bechaari take on a significant female character. There’s the fact that it’s poorly scripted and poorly directed. There’s the fact that it wastes competent actors like Anupam Kher, Boman Irani and Jimmy Shergill. There’s the fact that it fails to tap into Abhishek Bachchan’s ability to play uber cool the way few of his industry colleagues can, the way he did in Kabhi Alvida Na Kehna and Dostana. And there’s the overbearing fact that its pretentions to being a thriller are undermined completely by its part-predictable, part-contrived-despite-not-being-predictable storyline, lack of tautness and lack of finesse in storytelling.
The story is about four people who are invited to the Greek island of Samos by billionaire Kabir Malhotra (Anupam Kher). On the face of it, they’re a disparate quartet: there’s Thailand’s leading political figure O.P. Ramsay (Boman Irani), London-based journalist Tisha Khanna (Shahana Goswami), the nightclub owner and no-gooder Neil Menon (Abhishek Bachchan) from Turkey and Bollywood superstar Vikram Kapoor (Jimmy Shergill). But Malhotra knows more about them than they bargained for.
It’s a thriller, so any further elaboration on the story would have to contain spoilers. All I’ll say is that the introductory passage in Game right until the first crime is committed is quite engaging. But everything begins to unravel from the moment the International Vigilance Squad (IVS) arrives on the island in the form of Sia Agnihotri (Kangna Ranaut) and her team.
Why is it that so few Hindi film makers in recent decades have managed to pull off the thriller genre effectively? Maybe Abhinay Deo should have been force-fed all seasons of CSI before embarking on this project. It isn’t quite clear what the IVS is, but I can tell you that their methods are shoddy and the dialogues given to them certainly don’t sound to me like the conversations of intelligent, international crime scene investigators. Simple question: without giving away anything, I’d love to get an answer to this question from any of you who has watched the film: why didn’t it occur to the IVS right at the start to take fingerprints from a crucial object in the room where the first crime occurs?
What do I like about Game? Well, the locations are lovely, so is some of the production design (Neil Menon’s club – I like, I like) and the outdoor camerawork. Every character in the film is appropriately styled too, from Ranaut as a well-dressed sleuth in pantsuits to Goswami as the alcohol-swilling scribe with her heavily made-up eyes, Gauhar Khan as the wealthy man’s pretty but prim executive assistant and Bachchan junior in both casuals and formals. It’s a film that also reminds me of how much I’ve wanted to see Gauhar Khan in well-fleshed-out roles ever since I watched her in Rocket Singh: Salesman of the Year. But an intriguing build-up, a slick look and a talented cast are not enough to redeem this completely unsatisfactory whodunit.
For instance, perhaps Mr Deo could tell me why a murderer appears shocked when the news of his crime is announced on TV. Didn’t he know he had committed the crime? Please note how carefully I’m wording my sentences to ensure that this review does not give away any plot twists. There’s a scene in which Sia Agnihotri’s associate is informed that Vikram Kapoor has just confessed to a crime. Right outside their taxi, a child is peddling a magazine that bears the headline: “Vikram Kapoor Exposed.” Whoa, I’d like to know the production schedules at that magazine! And if that mag story was “exposing” the actor’s earlier shenanigans, well … the point certainly didn’t come across. Elsewhere, a news channel in Thailand plays a video of O.P. Ramsay. The audio levels are raised for viewers to hear but simultaneously, on one side of the TV screen, the anchor is shown continuing to address her viewers. Err … why would the anchor remain talking when she clearly wanted her viewers to hear what was being said in that video?
I know, I know, I’ll be told that I’m being too fastidious. Well, forgive me for believing that a good film maker should be – to borrow a phrase from Arundhati Roy from an entirely different context – a god of small things.
Some scenes in Game appear designed to be profound but come off looking childish instead. There’s the one in which Sia is on the phone with her boss who is ordering her to get off a case, possibly under pressure from powerful people. As she speaks to him, the camera moves to a newspaper lying next to her with a screeching headline about corruption, and Sia – in what is perhaps an unconscious action – circles that word repeatedly and ferociously with her pen. Ooh!
And while on the subject of that boss, why oh why does Bollywood struggle so often to get decent actors to play white people in films?! And why why why is a looooong love song allowed to slow down the pace right in the middle of a murder mystery when there’s nothing in that number to take the story forward and it’s unmemorable?
It’s hard to believe that Game is produced by the team who gave us Dil Chahta Hai, Lakshya, Don and Rock On. Something about this film gave me an ache in the heart for that lovely old film Shalimar in which a bunch of master criminals (played by Dharmendra, Sylvia Miles, Shammi Kapoor, John Saxon and O.P. Ralhan) gathered at the island home of a notorious gangster for a very different purpose from the goal that Kabir Malhotra has in mind in Game. I’d love to know what Shalimar’s director Krishna Shah would have made of this material. Because Game feels like an unkind April Fool’s Joke – on the entire team of the film, and on us.
Rating (out of five): *1/2
Photograph courtesy: http://www.gamethefilm.in/
Posted by Anna MM Vetticad at 12:31 AM