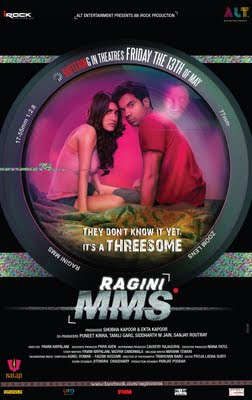 It’s been a while since I found the first half of a film so disappointingly uneventful, followed by a curiously satisfying second half. The big mistake that producer Ektaa Kapoor makes with Ragini MMS is that she throws in too many ingredients that give it a Love Sex Aur Dhoka hangover. Leading man Raj Kumar Yadav starred in LSD last year as the chap who surreptitiously records his sexual encounter with a salesgirl using surveillance cameras in a department store. He was desperate for a career break back then, he’s desperate to be an actor now. Add to that the deliberately shaky handycam movements in the first five minutes of Ragini MMS, so similar to the initial part of LSD, and I wanted to yell in exasperation at Team Ragini. Did they want to remind us of LSD or did they actually not realise what they were doing? Not sure which is worse.
But having felt let down through significant parts of the pre-interval portion of Ragini, I found myself quite transfixed after the break. Ragini MMS is clearly inspired by the storytelling style of films like Paranormal Activity and Blair Witch Project … which is not such a bad thing. After all, inspiration is not theft. What doesn’t work is the interval which should have been dispensed with totally. It’s also strangely insincere to flash text on the screen in the end referring to the real-life events that inspired the film, despite having started off with the claim that any resemblance to any person living or dead is purely coincidental. Arrey, what do they want us to believe?!
But despite these problems, Ragini MMS redeems itself in many ways. Kainaz Motivala is a natural actress. Raj Kumar is not just natural, his character’s earthiness is highly entertaining. Their behavior too is completely believable – he just can’t wait, she’d rather go slow, he doesn’t mind being downright rude to ‘friends’ who intrude on their romp, she’s not averse to doin’ it but hides it from mommy. Barring some of those clichéd loud-sounds-meant-to-scare in the first half, the film also steers clear of many horror flick staples: there’s no ghost in white, no disfigured human face with glazed eyes, no spooks flying through the air, not even a detailed flashback to a tragic story. In fact, the spectre in this film is more a vague presence than a solid figure. Besides, it plays on the mind that the film claims to be based on a true story, especially disturbing for those of us who don’t ‘believe’ in ghosts and yet are afraid of them.
As blood spills, darkness induces fear and a man’s treachery makes him repulsive to the girl who once loved him, I was fascinated by the fact that I was not scared while watching Ragini MMS, yet I could imagine just how unimaginably terrified I would have been if I’d been in Ragini’s place. Oh, the horrifying hopelessness of it all! Her helplessness as she lies handcuffed to the bed while her isolation claws at her is chilling. Now picture yourself as Ragini! Whew!