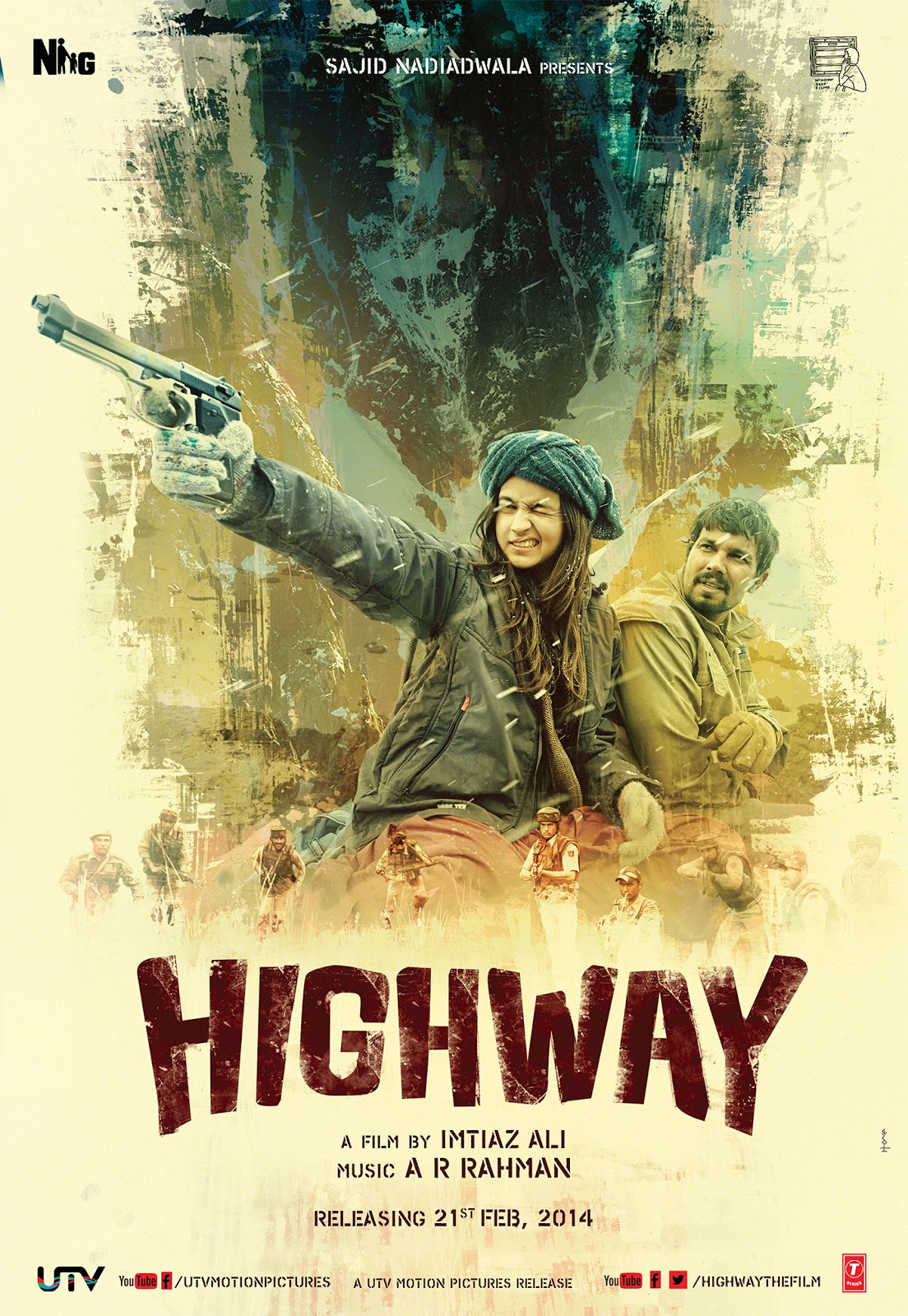 There’s a point mid-way through Highway when Veera Tripathi tells her kidnapper Mahabir Bhati: “Where you brought me from is a place to which I don’t want to return, where you are taking me is a place I don’t want to go to, but this road, oh it’s so beautiful.” She (Alia Bhatt) is a talkative creature, the city-bred child of a sophisticated family rolling in millions, snatched away from her wealthy world just days before her marriage. He (Randeep Hooda) is a lumpen and country bumpkin, a man of few words and many painful memories. That sentence she utters to him is one of many exquisite elements in writer-director Imtiaz Ali’s film Highway.

The leads are fine performers; A.R. Rahman’s music is as quietly haunting as the landscapes Veera and Mahabir cover on their cross-country journey; the songs are smoothly woven into the narrative; the locations (especially a salt-laden, isolated post in Rajasthan, the mountains of Himachal Pradesh and Kashmir) are stunning, many of them hitherto unexplored; and Anil Mehta’s camerawork is spellbinding. Besides, this is that rare Hindi film exploring the theme of child sexual abuse, while socking us in the face with parallel tracks about the exploitation of girls and women in tellingly different fashions in wealthy and poor families.

That’s why it hurts to admit that there is much that is also missing from this film. Some of this has got to do with the fact that every once in a while on this road trip, the director and cinematographer seem so overwhelmed by the spectacular locales they’re visiting, that they stop to get an eyeful; but the screenplay does not have the heft to ensure that this does not result in lethargy. It’s also unsatisfying that Highway gives us only brief glimpses of Veera and Mahabir’s – especially Mahabir’s – minds.

And then there is the problematic casting. Individually, Alia and Randeep are perfect for their roles. Together though, the pairing is disquieting because the screenplay deliberately imbues their blossoming relationship with a certain ambiguity, leaving us to figure out exactly where they are headed. So, while I found myself longing to see Veera and Mahabir hooking up; I simultaneously felt icky at the thought of Alia and Randeep together romantically. Don’t get me wrong: Randeep is one of the industry’s best – and sadly most under-rated – actors right now (making it easy for us to forgive him for that embarrassing aberration called Jism 2). He is also inexorably sexy. Here in Highway, he is utterly volcanic, with lava bubbling below the surface until he briefly erupts at one point. Unfortunately for him, he’s all man – if you know what I mean – whereas Alia is a child-like, baby-faced, cherubic little thing; and the very thought of him seeing her as anything but that is almost disturbing.

Alia was introduced to us in the fluffy Student Of The Year where she was expected to do nothing more than look pretty and dance well in baby-doll dresses. In a far more demanding role in a far more demanding film, she proves that she is capable of a nuanced performance instead of merely cashing in on her impossibly youthful, delicate looks. She just needed to be cast with a different actor on this particular journey.

In its best moments, Highway reminded me of one of my favourite recent road films: Peter Weir’s The Way Back. There is a particularly delightful scene in which Veera, celebrating her newfound ‘freedom’, dances with gay abandon to an English song and Mahabir’s bemused, fellow-rustic partner-in-crime (the fantastic Durgesh Kumar) joins in. Watching them together, you know that “Stockholm Syndrome” would probably be a literal, simplistic explanation for what’s going on with Veera. Equally engaging are the times when she expresses wonderment at the most mundane discoveries, such as a decrepit abandoned bungalow, and her kidnappers respond with wonderment at the inexplicably limited life she has led despite her money.

Unfortunately, with all this going for it plus an unpredictable ending, Highway cannot escape from the burden of its sketchy, incomplete feel. In an interview I did with him for Maxim magazine a few weeks back, Imtiaz Ali had told me: “What I find appealing about the road is that when you’re travelling, not only is it entertaining because you see new places, but you discover things about yourself that you did not know before.” This Highway tells us some lovely things about Veera and Mahabir, but we needed to discover much much more.