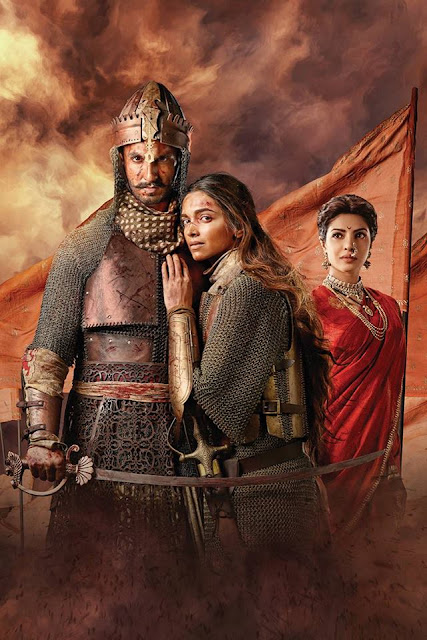 Bajirao Mastani is almost everything the world has come to expect from a Sanjay Leela Bhansali film. Almost. It is a ravishing spectacle, the costumes are lush, the jewellery dazzling, the sets extravagant, the cinematography brilliant, the frames painterly, the lead cast more gorgeous than you would imagine human beings could be. For this alone, it is worth watching.

There is more to it than that though. The director’s latest film is told as a fable about the love between the 18th century Maratha warrior Peshwa Bajirao I and his second wife Mastani. The tone is trance-like and dreamy even when it is operatic and melodramatic, like a whisper passed down through generations and swirling about somewhere in the mists of a distant, mythical time.

This is an interesting narrative choice considering that the two lead characters are in fact historical figures and their romance is not an apocryphal story. It is a choice (made no doubt with the goal of not offending any community or angering historians) that permits the storyteller to be poetic, to fictionalise and dramatise to his heart’s content, even while staying as faithful to history texts as it is possible while chronicling the intimate lives of public figures.

Bajirao is a skilled soldier, a great leader and Peshwa (prime minister) to Chhatrapati Shahu of the Maratha Empire. Mastani is the valiant daughter of Bundelkhand’s Maharaja Chhatrasal with his Muslim queen Ruhaani Bai. Since Bajirao is already married when they first meet during the course of one of his battles, he returns home alone to his much-in-love wife Kashibai. But Mastani pursues Bajirao and they later marry.

The film is about the two simultaneous battles subsequently fought by one of the greatest warriors known to this country, the first one to expand the Chhatrapati’s empire and the other to gain acceptance for Mastani among his family.

From the start it is evident that Bajirao Mastani is Bhansali’s ode to K. Asif’s Mughal-e-Azam, the folktale about the love between the Mughal crown prince Salim (later to become Emperor Jehangir) and the slave girl Anarkali. Yet, it is unlike that iconic 1960 film, or its precursor about the same legend, Nandlal Jaswantlal’s Anarkali (1953), or even the story of the prince’s father Akbar’s political-romantic alliance with his Rajput Hindu wife Jodha Bai recounted by Ashutosh Gowariker in Jodhaa Akbar (2008). The difference from these three memorable films lies in the fact that Bajirao Mastani doesn’t deify its pivotal romance by making it seem like its central male character is committed to just one woman or by brushing aside uncomfortable questions about male infidelity and the fleeting nature of this particular hero’s feelings.

Bhansali doesn’t evade this tricky territory, instead giving Kashibai a crucial scene in which she asks Mastani about the reliability of Bajirao’s heart that is set on one woman at one time, another at another time and who knows who next. Mastani clearly has no answer besides her own affection for him. She does not bat an eyelid when Bajirao impregnates Kashi without feeling conflicted about his emotions or actions. And she does not see his relationship with her as faithlessness towards Kashi who he describes as not just his wife but also his friend.

While the film makes it hard for us to be out-and-out angered by Bajirao’s hypocrisy, it certainly calls out the hypocrisy of his family and advisers who, as he points out, would have been willing to accept Mastani as his concubine but not his wife.

Equally special is the way the film negotiates Hindu-Muslim equations. Many of today’s Hindutvavaadis hold up the 17th and 18th century Marathas as flag-bearers of a Hindu Rashtra, as antagonists of Muslims and as a people who fought off “Muslim rule” in what they believe is “Hindu India”. Bhansali’s starting block with this film is in itself a position against their interpretation of history since he chooses to tell the story of a Maratha’s love for a Muslim. He takes it further with the Peshwa’s open declaration that his battle with the Mughals is restricted to his desire to extend the Chhatrapati’s territory and has nothing to do with their religion.

These then are the most fascinating aspects of the film: the unromanticised envisioning of Bajirao as a good man with shades of grey; the refusal to sidestep a first wife’s pain even if her husband is the film’s hero, and his relationship with his second wife is what folklore has placed on a pedestal; and the telling ambiguity about who is opposing Mastani out of affection for Kashi and who out of disdain for her being Muslim.

These elements are further augmented by the excellent principle cast – Ranveer Singh as Bajirao, Deepika Padukone as Mastani and Priyanka Chopra as Kashibai – supported by a bunch of talents, most especially Tanvi Azmi as Bajirao’s formidable mother.

Though Kashi gets less screen time than the titular characters, Priyanka makes the film as much her own as theirs, shining with grace, poise and restraint each time she comes on screen. She also slips comfortably into the role of a Maratha woman, tweaking her body language to fit the part and going well beyond the crutch of that sparkling nose ring and those lavish outfits.

The camera is occasionally distracted by Mastani’s luminous beauty, but Deepika still manages to lend depth to her character. She also reminds us of her penchant for action in one of the film’s best scenes, in which she single-handedly fends off a group of attacking swordsmen.

To stand out in the presence of these scintillating ladies takes some doing, but Ranveer achieves precisely that, reaching into himself for this character to deliver his best performance till date. In a break from the assembly-line uniformity of most male bodies in Hindi films these days (and his own over-muscled torso in the otherwise-lovely Ram-leela) he also gets his body right for the role. Hard though it is, with Bajirao Mastani he actually makes us forget that boy who stormed into our lives as the fabulous Bittoo who did “binness” on debut in Band Baaja Baaraat.

The use of language in the film too is neatly done. I’m not an expert on Marathi but the dialect that these characters speak blended with Hindi flows with natural ease. Thankfully, none of the actors is ‘doing an accent’. Instead, their speech is nicely nuanced in its intonations.

If Bajirao Mastani falls short of being what it might have been despite these positives, it is for two reasons: the songs (Bhansali’s compositions are a let-down); and the smattering of self-indulgent scenes that slow it down especially in the post-interval portion, with spectacle subordinating all else. Like the unwell Peshwa’s elongated, feverish hallucinations; or when Bajirao swishes and swings a chuttuvaal in each hand and barges solo into an enemy force. This whip-like sword with a flexible blade is used in Kalaripayattu, the martial art form from Kerala in which Ranveer trained for this role, and the actor looks amazingly at home with it. But the scene itself is no less silly – despite the more stylised presentation – than Sunny Deol single-handedly taking on the entire Pakistan Army with a hand pump in Gadar.

This is also what ails the relatively pretty-sounding song Pinga featuring both leading ladies. The women dance impeccably yet the focus is so much on the look that the feel is lost. That electricity Bhansali conjured up in the Dola re duet between Madhuri Dixit and Aishwarya Rai in Devdas (2002) is missing here, and Pinga ends up looking like a me-too and an also-ran.

In the rest of the songs, the choreography is heart-stopping, the dancers energetic or elegant as required, but the tunes are unremarkable. This is why Deepika’s dance to Deewani Mastani in the luxuriant Aina Mahal looks stunning yet does not match up to a number that it is evidently paying tribute to: Mughal-e-Azam’s Pyaar kiya to darna kya in which Anarkali challenged Akbar through words, music and dance in another unforgettable hall of mirrors.

Still, there is more to love than lament in Bajirao Mastani. Note the scene in which a mob of shadows seems to march towards the Peshwa before the camera raises its head from the floor and we realise that they come from a band of purposeful Brahmins. Note the many other scenes in which diyas, mirrors and silks shimmer like liquid gold. Note too Bajirao’s secularism, his reminder to us that all religions preach love yet love has no religion, his open defiance of the clergy, Mastani’s courage and passion, Kashibai’s dignity despite her limited choices, and that lovely moment of bonding between mother-in-law and daughter-in-law.

Despite its shortcomings then, this is a brave and beautiful film – beautiful to look at, beautiful in its position on religion, brave in its take on history, brave in its unwillingness to paint religious groups or its primary characters as black or white.

Bhansalified history, as it turns out, makes for good cinema.

Rating (out of five): ***
This review has also been published on firstpost:
http://www.firstpost.com/bollywood/bajirao-mastani-review-theres-more-to-love-than-lament-in-this-beautifully-brave-film-2552146.html#disqus_thread