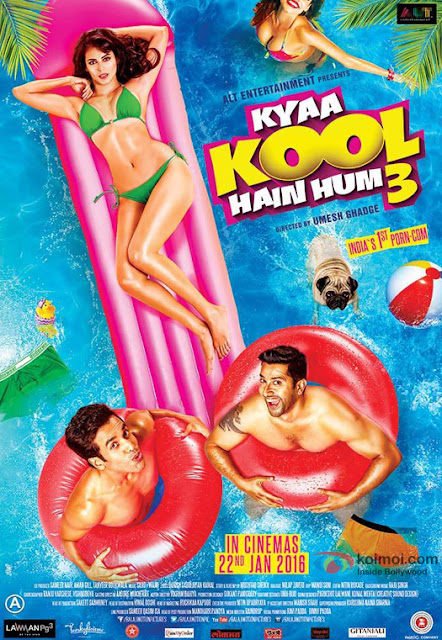 Kyaa Kool Hain Hum 3 should inspire the Censor Board to introduce a new rating to the existing lot: J for Juvenile. Seriously, A for Adults Only is an insult to all those over-18s in this country with an iota of maturity and common sense.

Tusshar Kapoor and Aftab Shivdasani play buddies Kanhaiyya and Rocky in this, the third in the Kyaa Kool series. Kanhaiyya, son of industrialist P.K. Lele (Shakti Kapoor), is thrown out by his Dad for messing up at work. His quirk, since everyone must perforce have an identifying quirk in such films, is that his eyeballs get locked whenever he sees the colour red, giving him the appearance of a squint. Rocky is… well no one really bothers to tell us anything about him beyond the fact that he is Kanhaiyya’s friend.

The two take off for Bangkok where Rocky says a certain Mickey (Krishna Abhishek) has offered them a “hand job” in his business. Slip-up alert! He meant to say “a job which requires us to lend him a hand in his business”. So clever, na?

When the boys land in Thailand, they realise their friend is a producer of, ahem, adult films although he insists he is not doing “porn ka kaam” but “punya ka kaam” (applause again, please!) since his earnings are pumped into considerable philanthropic work. The residents of Mickey’s palatial home-cum-studio include a transgender actor, another who is gay and perennially semi-nude, a method actress who gets so engrossed in her roles that even her normal off-screen conversations are conducted in gasps and moans (Gizele Thakral) and another (Claudia Ciesla) who keeps going off into a trance to feel up her own body.

The setting and the latter two characters in particular have the potential for a rip-roaring laughathon. Besides, Krishna has good comic timing and KKHH3 reveals a funny bone in the Polish-German model-actress Claudia, whose calling cards in India right now are the ‘item’ number Balma in 2012’s Akshay Kumar-starrer Khiladi 786 and her appearance on Season 3 of the reality show Bigg Boss. Sadly, the writer-director team of KKHH3 loses the plot even before they’ve laid it out, recycling clichés and taking it for granted that nonsense cannot be intelligent, that rhyming words are somehow funny and that repetition is in itself a joke.

So a female porn star is known as Mary/Meri Lee, the surname Lele becomes a predictable source of merriment, a man mistakes his own foot in bed for an erection (How? Could he not feel his own body?) while another refers to a buxom woman as “boobsurat”. Yawn. Think of something new, people. Then there are meaningless inside jokes playing on the words “masti” and “grand masti” (you know, the titles of those films featuring Aftab and guest star Riteish Deshmukh). Yawn. And of course there are self-referential wisecracks about “ekta” (unity). Yawn, yawn. How often will we hear that in a film produced by Ekta Kapoor?

No doubt too we will be told, as we always are, that this is what the public wants. Well, this member of the public would humbly submit that it is possible to be light-hearted, ludicrous and downright stupid to let your hair down, without being infantile.

Even within this series, the first Kyaa Kool Hain Hum (2005) was fun because there was a freshness to it, an impertinence that cocked a snook at ultra-conservatives, even if it pandered to those very conservatives with its many stereotypes,. The follow-up film, Kyaa Super Kool Hain Hum, was boring, offensive and icky. KKHH3 is not even trying. Maybe it’s our fault that, as an audience, we made its predecessors hits. As with politicians and the media, so it is with cinema – I guess we get the films we deserve. What next? Kya Super Stupid Hain Hum?

Rating (out of five): ½ star
This review has also been published on Firstpost:
http://www.firstpost.com/bollywood/kyaa-kool-hain-hum-3-review-this-film-doesnt-even-try-but-maybe-its-our-fault-for-watching-its-prequels-and-making-them-hits-2596968.html