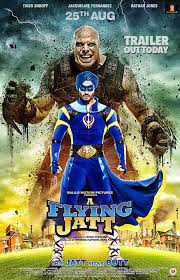 In a scene exemplifying the worst and best of the deliciously named A Flying Jatt, our costumed Punjabi superhero lands up at an airport to thwart a terror attack. We already know that he can move at the speed of lightning. Here in the midst of scared passengers and gun-toting villains, he is so fast that the rest of the world appears to freeze in that moment as he snatches weapons away from the bad guys, adjusts people around and fixes the situation so that those goons literally fall at the feet of the police when he is done.

It is all very funny and well-choreographed. Sadly, it is also terribly familiar. All that is missing is the Eurythmics song Sweet dreams are made of this in the background. But for that musical accompaniment, writer-director Remo D’souza has shamelessly copied the entire concept of the scene from the one that so recently made Quicksilver an iconic player in the X-Men film series.

D’souza gives us no indicator that this was intended as a tribute. Besides, “tribute” would be too convenient an umbrella to hide beneath, considering that so much of his film is borrowed from American superhero flicks.

As it happens, in the superhero aspects of his story, he falters wherever he is not lifting ideas: and so Flying Jatt temporarily loses his powers and self-healing ability, but we never find out why; we are not told either how the supervillain Raka gained his powers – he simply lay in toxic waste for several days and developed his invincibility. You and I would die in similar circumstances, how did he not? Not even a semblance of semi-convincing scientific or mythological mumbo-jumbo is offered as explanation.

There is a well-thought-out twist though in the matter of how Raka retains his strength: he feeds on pollutants, wilting when the air is clean but revving up when he takes in toxins – neat way of talking to kids about environmental issues.

A Flying Jatt’s plagiarism, not-so-hot SFX and patchy production design give it an air of tackiness, yet it cannot be written off. The film is delightful early on when it is laughing at itself and the superhero genre. The scenes in which the protagonist and his family first discover his powers are hysterical, especially his confusion about what the hell is now expected of him. There are plenty of other comedic interludes that make this an interesting experiment in a genre rarely visited by Bollywood that has earned Hollywood billions worldwide.

The story revolves around Mrs Dhillon (Amrita Singh) and her son Aman (Tiger Shroff), a martial arts instructor who is afraid of heights and dogs, and is often the butt of pranks in the school where he teaches. The industrialist Malhotra (Kay Kay Menon) runs factories that are ruining the air and water in the vicinity. Mrs D stands up to him when he demands to buy land belonging to her and her neighbours, including a patch on which stands a sacred tree.

Not long afterwards, we meet Malhotra’s hired goon Raka, a mountainous fellow played by WWA and WWE wrestler Nathan Jones. When Aman and Raka clash one stormy night, an episode combining lightning and an ode to the Sikh religion end up giving Aman his Superman-like strength, his Spidey sense, the gift of flight plus the ability to absorb knowledge and skills at an incredible pace. Since he must remain incognito, Aman takes on the moniker Flying Jatt for his superhero avatar.

Also in the picture is Aman’s colleague, the schoolteacher Kirti (Jacqueline Fernandez), who is the film’s designated female-person-for-the-hero-to-fall-in-love-with.

Woven into the film’s overt messaging about environmental pollution is a running tribute to the Sikh community. That element is a mixed bag. I mean, I love that Mrs D skewers idiots who mindlessly mouth the cliché “Sardarji ke baarah baj gaye”. Seriously, community-directed humour is fine, but not when used unrelentingly in personal interactions. Imagine being Sikh, Irish or Polish. How do you admit that you are bored to death with Sardar, Irishman or Pole jokes or even hurt by the non-stop lampooning, without being accused of over-sensitivity, that too by people who would not take even half a wisecrack about themselves or their communities?

That said, A Flying Jatt misses the opportunity here to graduate from being a comedy with lessons thrown in for very very little kids, to a children’s film with the sort of adult depth that is a hallmark of some of the most significant works in this genre. The bow to Sikhs turns treacly and in-your-face populist beyond a point, and there is no discussion apart from the obvious about the beautiful symbolism of the turban. At a time when the entire world is blithely discussing Islamic dress, we are still fearful of raising questions regarding public displays of religion by other major faiths. Why?

D’souza might well argue that India, with its many violence-prone religious representatives, is hardly the place for such a discourse. Every place ought to be the right place for intelligent, prejudice-free debate and we cannot all be waiting for someone else to bell the cat. As a children’s film then, A Flying Jatt is impactful. As entertainment for grown-ups, it is limited.

That said, just a week after Happy Bhag Jayegi, it is good to see Bollywood once again giving us a film about Punjab-based Punjabis shorn of the usual stereotypes about the community.

Tiger Shroff’s performance and screen persona in this film are no different from Heropanti and Baaghi. It is hard to dislike him. He has the sweetest of smiles, there is a dancerly grace to all his movements and he even fights with elegance. However, his Caucasian features make him a misfit in the worlds he has visited in his three films so far and he is too camera conscious when not dancing or throwing punches. It is his good fortune that he comes across as a really nice guy, so that you almost want to forgive him his strained acting here in A Flying Jatt.

Amrita Singh, who was so good playing a baddie in Aurangzeb, overacts in a couple of scenes in this film, but for the most part is relaxed and convincing. She is really pleasant to watch when she lets her hair down in the comic scenes.

The often superb Kay Kay Menon though, lays it on too thick to convey his evil intentions. The thing about artistes like him is that you have to console yourself by imagining that they are well aware of their hamming, because they are so darned good when they are not. 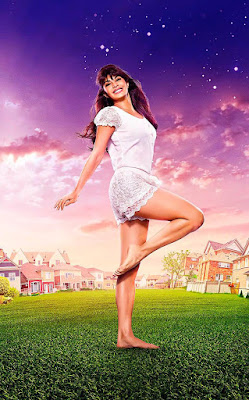 In Dishoom Jacqueline Fernandez gave us glimpses of what she might be when she is treated as more than a showpiece. She is back to the dolly routine in A Flying Jatt, playing a bespectacled Barbie with constantly widened eyes, who does not speak, but squeaks. She comes into her own only while dancing to Beat pe booty. But c’mon Ms, you are more than just your booty.

The production design is inconsistent. Most of the settings look fake while trying to convince us they are not. The fantasy sequence featuring the song Toota jo kabhi tara works because it is deliberately faux and looks prettily fairytale-like as a result, straight out of a Disney animation film. I also enjoyed the ballet-like choreography in that scene.

Large parts of A Flying Jatt are unoriginal and tacky, right down to that well-intentioned yet poorly composed sentence flashing on screen right in the end and credited to Remo: “Everything has an alternative except Mother Earth.” The film’s comedy, occasional inventiveness and aura of innocence are what make it effective in its own way, despite the lack of depth.

D’souza had displayed his natural wit even in his first film F.A.L.T.U. in 2011. A Flying Jatt could have been so much better than what it is, if he had not kept one eye fixed Westward for inspiration. This one is perhaps best suited to the very very young.