REVIEW 412: THE LEGEND OF MICHAEL MISHRA 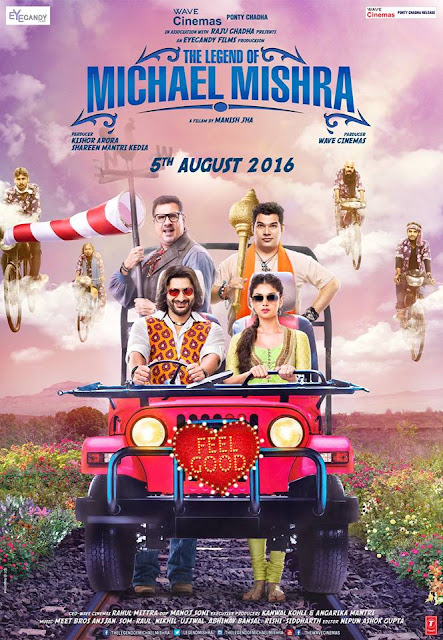 The word “quirky” was perhaps floating about in director Manish Jha’s head while he conceived and created this film. Two words, actually: “quirky” and “kitsch”.

Everything about this Bollywood film screams out the team’s effort to be both. It is neither.

The Legend of Michael Mishra (LOMM) starring Arshad Warsi and Boman Irani is about a hooligan/gangster whose ambitions and career are entirely shaped by his life-long quest for the girl he fell in love with – and lost – as a child. Their paths cross again as adults through a hare-brained set of circumstances that make Sajid Khan’s films seem well thought out.

He decides to become a better man for her, while she takes off to Mumbai to become an actress. Through another hare-brained set of circumstances, they meet again. There is a not-so-bad twist in the end, but by then LOMM is a lost cause. Watching this 124-minutes-and-5-seconds-long effort to be adorable, edgy and funny is a tiring, energy-sapping experience.

You can accuse many contemporary Bollywood comedies of being illogical and over the top, but there is something far far worse than that. LOMM is under the top – so under that it appears to be mining the earth for a new low in tedium.

The film opens with a build-up to Michael Mishra’s supposedly legendary status. Road signs mark the route to a dhaba that bears his name. A bus stops, and we finally see this rather large, brightly coloured eatery. A pretty white tourist is anxious to hear Michael’s story despite the cynicism of an academic in their group. The dhaba manager (Boman Irani) obliges and we are introduced to a petty crook who encounters a little girl dancing under a tree and falls in love.

You know you have a problem on your hands when the director seems not to have spotted the icky touch that the casting lends to that scene. The boy is played by actor Mohit Balchandani who has a relatively very mature face in comparison with actress Gracevera Kaur, who plays Varsha, and looks 10-12 years old. Shudder. Still, we are informed that they are both children, so we must believe it. (See postscript) They are separated, and a grown-up Michael (Warsi) spends many years searching for her. He finally spots a grown-up Varsha (Aditi Rao Hydari) at a contest called Bihar Is Full of Talent, singing a song in horribly wrong English. There is some potential there, but someone involved seems to have decided that the mere mention of Bihar and the use of poor grammar in that scene is enough to get laughs through the rest of the film. It is not.

Michael then sets out to court Varsha with the cooperation of his gang (played by a bunch of really bad, uninvolved, unenthusiastic actors) and his sidekick named Half Pant (Kayoze Irani). Much blah later, they are – spoiler alert – united in love.

Even the presence of Warsi in the film makes no difference to its pace or appeal. The Legend of Michael Mishra is flat from start to finish, and one of Bollywood’s most charming actors can do nothing to save it. The script is daft, to say the very least. It boggles the mind that it took five writers to come up with this nothingness (credits: story – Jha himself, Radhakrishnan and Sneha Nihalani, dialogues – Anshuman Chaturvedi, additional screenplay – Vijay Kapoor).

Besides, Warsi and Hydari are terribly mismatched, not just because of the obvious age gap, but because there is no spark between them. None. Zero. Zilch. Shunya. It is sad to see Hydari – she who played Rama Bua in Rakeysh Omprakash Mehra’s Delhi-6 (2009), a gangsta’s dynamite of a wife in Sudhir Mishra’s Yeh Saali Zindagi (2011) and the heroine in Anu Menon’s sweetly likeable London, Paris, New York (2012) – reduced to this.

Sadder still is the memory of Manish Jha’s early promise. The spotlight first fell on Jha over a decade back when his short, A Very Very Silent Film, won a prize at the Cannes Film Festival. This was followed by critical acclaim for the feature film Matrubhoomi – A Nation Without Women which, ideologically debatable though it may be, displayed commitment to his chosen genre and his concerns about female infanticide.

As the great philosopher Barney Stinson once said…

Okay, I tried to keep a straight face for that sentence but could not. Revise that: as Barney Stinson from the hit American sitcom How I Met Your Mother might have said, you cannot use the word “legend” lightly. There is a big distance between trying to be clever and being clever. If you fail to bridge that distance, you have a disaster on your hands. If you fail to bridge that distance but do not even realise it, and instead present the end product for public viewing, the result is cringe-worthy. Such as that scene in this film in which Michael saves his jailor from almost certain death, and they are later shown seated on a rocky hillock in the twilight with the said jailor playing what sounds like Elvis Presley’s Can’t help falling in love with you on his harmonica. Was that scene intentionally referencing Sholay? Was that a Jai-Veeru moment with a homosexual overtone? Was it meant to be humorous, moving or deep? Clearly Jha was trying to make some sort of a cool, smart-alec point there, but who knows what it is.

The Legend of Michael Mishra, just like the non-existent chemistry between its lead couple, is a big naught.

Postscript: After writing this review, I checked with the team of the film and learnt that Gracevera Kaur is 13 while Mohit Balchandani is 20. What was the director thinking while casting a minor with a child-like face as the romantic interest of an evidently adult male, in a film that is not about paedophilia? Or was he not thinking at all?