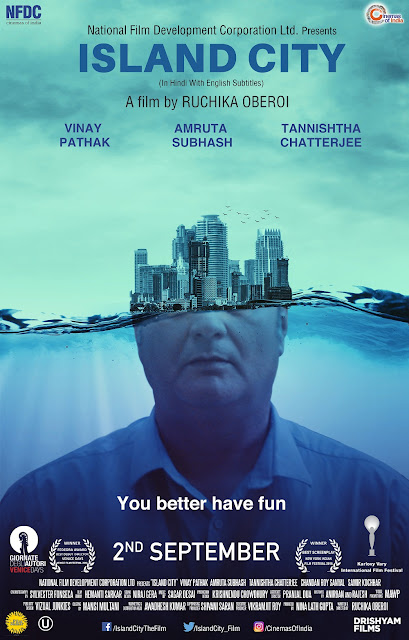 Island City is set in Mumbai but its premise would be relevant to any megapolis in the world. Come to think of it, the film may purportedly be about this big city or any big city, but with a tweak here and there it could fit just as well into a less imposing setting.

Ruchika Oberoi makes her directorial debut with a cinematic triptych about the robotic nature of too many lives in this world. The film covers an employee who mechanically follows a routine and his bosses’ instructions, a wife who makes a show of mourning the possible loss of a boorish husband, and a daughter who goes along with her parents’ choice of groom because she feels no other man would be interested in her and she has not even considered a life without one.

Though the urban backdrop may seem crucial to the narrative, it is not. Take away the swanky office and dictatorial organisation, and that employee could still be a worker in small-town India glad that he has a job, any job, rather than one that excites him. Take away the visual landmarks like the Mumbai trains, and those women resigned to fate could be from a small town too. And the themes could fit into pretty much any country. It is fascinating to see the manner in which those themes remain universal despite the cultural and locational specificities in this telling.

The title may suggest that this is a film about apathetic, impersonal cities. That is the more obvious subject matter, but the film is really about people who live life and live out relationships like automatons, people who are afraid to exit their comfort zones, including those for whom life in its entirety is a regret-filled compromise – unless fate intervenes.

Segment 1 titled “Fun Committee” is about corporate zombie Suyash Chaturvedi (Vinay Pathak) winning a day off from work, with a ‘fun’ schedule planned down to the last T by his office’s HR department. He is supposed to relax and enjoy himself, but if he does not comply with the detailed directives issued to him, he will be penalised by the management.

Next comes “The Ghost in the Machine” featuring a middle-class housewife called Sarita Joshi (Amruta Subhash) whose husband is in hospital hooked to life support systems. To ease the family’s tension, she purchases a TV, a distraction her despotic husband did not allow in the house. They get hooked on the tele-soap Purushottam when they receive some good news.

Meanwhile, in the city’s poorer quarters in “Contact”, Aarti Patel (Tannishtha Chatterjee) works at a printing press. She is a quiet, uncomplaining sort, but a sense of dissatisfaction with her dull existence is growing inside her when she receives an intimate letter one day.

Most viewers expect the individual strands in multi-strand films to intersect at some point. In the best films of this genre, the sub-sets can stand on their own even if the plot does not connect them. Many filmmakers feel compelled to link them, sometimes doing so to brilliant effect, sometimes awkwardly. Island City’s three tales are linked smoothly, thematically and by plot.

Boring ol’ Suyash is a role tailormade for Pathak who is adept at playing the common person, but that does not translate into a predictable performance. The actor lends enough nuances to his character to take him to places we are not expecting. I particularly enjoyed hearing him address a senior as “Sir”, giving the word a slight accent that made it sound comically deferential.

Chatterjee is aptly cast as Aarti in Story 3 and finds a perfect foil in the dynamic Chandan Roy Sanyal playing her egoistic fiancé Jignesh who seems comfortable with her primarily because he is convinced that she is too unattractive and unadventurous to ever draw the attention of or be drawn to another man. Sanyal is one of the finest character actors in contemporary Hindi cinema and it is a pleasure to see him in a substantial role that does justice to his charisma.

Acting, writing, satirical comedy and pathos – it all falls into place in their story, the most unapologetically impertinent of the lot. The juxtaposition of Sarita’s strained marriage against a TV show about an ideal husband, for instance, cheekily implies that such men can be found only in the imagination of soap scriptwriters. The relationship between the two women is especially intriguing because the filmmaker leaves us guessing about whether they are mother and daughter or mother-in-law and daughter-in-law. The old lady lives with Sarita and her husband, which, if you go by Indian custom, suggests that she is the ma-in-law. Sarita addresses her as Aai, the Marathi word for mother, though that could be in keeping with that other Indian convention, of treating your in-laws as parents. But their attachment is far removed from the antagonism stereotypically assumed to be a hallmark of all real-life saas-bahu rishtas, nor do they share an unbelievably syrupy equation of the kind often shown in silly serials such as the one they are currently watching. So are they maa-beti or saas-bahu? Either way, they come across as buddies and co-conspirators with great empathy and affection for each other. This is an enjoyable instance of female bonding not seen often enough in Indian cinema.

That said, Island City is a well-woven whole. Sarita’s saga is the most overtly entertaining of the three. The other two take some time to reveal their verve, then amply reward viewer patience with the shock value of “Fun Committee” and the unexpected (tragic) twists in “Contact”.

Oberoi does not alter her seemingly laidback though assured directorial manner in any segment, but the production design by Krishnendu Chowdhury and cinematography by Sylvester Fonseca are cleverly used to give each one a distinctive look. The steely shades of “Fun Committee” lend to it a slightly surreal, futuristic feel, to go with its deliberately exaggerated swipes at corporate India and its farcical tone. “The Ghost in the Machine” is warmly lit in Purushottam and in Sarita’s house, to be contrasted with the cold colours of the hospital where her husband now lies and the flashback to the time when he was well. “Contact” has grimy shades, much like the garbage spills Aarti passes on her way to her dreary work.

Island City was premiered last year at the world’s oldest known film fiesta, the Venice Film Festival, where it won an award for Best Debut Director. The honour is well deserved. Ruchika Oberoi’s understated style, on-point writing and sense of humour are significant new additions to the Indian cinemascape. Island City is a sorrowful yet amusing, acutely observant film.