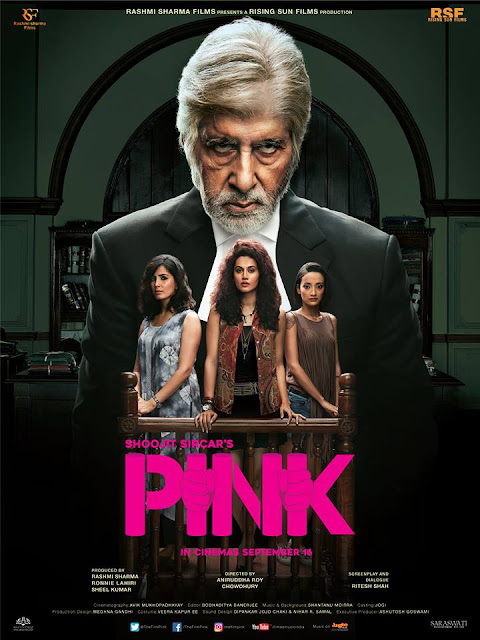 Every sleazy hand that ever groped you, every insulting conjecture ever made, every lascivious remark ever thrown at you, every lewd gesture, every leering eye, they may all come to mind as you watch director Aniruddha Roy Chowdhury’s Pink. This is a film about male privilege, prejudice, sexual violence, and the many systems that support them.

The starting block of Pink is a rock show on the outskirts of Delhi where Minal Arora (played by Taapsee Pannu), Falak Ali (Kirti Kulhari) and Andrea Tariang (a character who shares her name with the actress playing her) meet Rajvir Singh (Angad Bedi), Dumpy a.k.a. Raunak Anand (Raashul Tandon) and Vishwajyoti Ghosh a.k.a. Vishwa (Tushar Pandey). Falak already knows Vishwa. They get chatting. The women accept an invitation to drinks and dinner at a nearby resort. Things go awry when Rajvir mistakes their sociability for sexual availability and forces himself on Minal. She resists, he gets aggressive, in a state of panic she smashes a bottle on his head.

This opening incident is revealed through a smart narrative device between the opening and end credits that tests our own biases as viewers in the he-said-she-said game that ensues.

The film is about Rajvir’s quest for revenge with the help of his friend Ankit Malhotra (Vijay Varma), the girls’ quest for justice, and society’s interpretation of the meaning of consent.

At a time when sections of upper-class Delhi and Mumbai seem disturbed by the action taken in the Tehelka and Mahmood Farooqui rape cases, and coming from an industry that continues to make light of heroes molesting heroines in the guise of courtship, Pink is a huge milestone simply by virtue of its choice of theme. Mainstream Hindi cinema persists in perpetuating the notion that it is okay for a man to read a woman’s “no” as “maybe”. Just weeks back, director Ali Abbas Zafar (Mere Brother Ki Dulhan, Gunday, Sultan) told me in an interview: “There are two ways of stalking. One way is ugly, one way is politically correct.” For such an industry to make a film taking an undiluted position that a “no” from a woman means “no” is in itself a reason to celebrate.

What goes against Pink though is an occasional self-consciousness, an overt awareness that it has been created to send out a message on women’s rights – an awareness that begins with its cliched title (pink for girls, blue for boys, you know) and ultimately leads to some overly dramatised courtroom episodes that cross the border into almost ridiculous, self-defeating territory.

It is the film’s good fortune that those scenes arrive very late in the day. Until then and after they are through, there is plenty in this film that makes it worthy of our time and discussions, from the many significant nuanced arguments it takes up in the matter of violence against women to the top-of-the-line performances of the three talented female leads and the four men playing their antagonists. Chowdhury’s heart is in the right place and that in itself is worth toasting.

Pink smoothly packs multiple debates into a single compact film: how society judges single women, the pre-conceived notions about women not staying with their parents, the assumption that if women receive male visitors at home then they must be promiscuous, the social definition of “provocation”, the stereotyping of women from certain communities, the manner in which patriarchy paints men as helpless victims of their hormones, the gentle reminder that patriarchy could not survive without the collusion of at least some women and the reminder too that feminists may well be men (a kindly landlord who refuses to buy into gossip about his female tenants, the watchful neighbour, the sympathetic lawyer, the considerate judge).

Pink also delivers a slap on the face of status quo-ists who are alarmed at the tiny gains made by India’s women’s rights movement in recent years. The whispers are no longer whispers, as panic-stricken men anxious about a potential loss of millennia-old privilege paint pictures of hordes of women filing false cases of violence and discrimination against helpless men in a world rapidly switching to female dominance. Pink has something to say about all this and more.

Half the battle is won for the film because Chowdhury’s clarity of thought is complemented by his smashing cast. Pannu is relatively new to Bollywood but an established star of Kollywood and Tollywood. Kulhari has done a few Bollywood films, but none so far have been box-office successes. Both women have already proved that they are extremely natural performers. They live up to that track record in Pink (though Pannu needs to work on her enunciation of “coward” which was jarring in the film considering that the rest of her diction was well-suited to a presumably public-school-educated Punjabi girl from Delhi).

Andrea Tariang is a welcome addition to the Mumbai cinemascape. Firstly, it is a joy to see a Hindi film that actually features a character from Meghalaya – Bollywood tends to pretend that the North-east of India does not exist. It is such a relief to see the character being played by an actor from Meghalaya, unlike Mary Kom that avoided risking a newcomer from Manipur, instead having a Manipuri Mary Kom played by a part-Punjabi-part-Bihari-part-Malayali Priyanka Chopra since she is an established star. Most important: Tariang is good.

The lead trio’s perfect chemistry is the bedrock of this film, as is their demeanour. They come across as real-life friends and real-life middle-class working women living in south Delhi.

This would not have been possible without the credible characterisation and effortlessly flowing Hindi-English dialogues by writer Ritesh Shah. His screenplay also does full justice to the four villains of the piece and all four actors are excellent. Varma and Bedi merit a special mention for the conviction with which they convey seething arrogance and male entitlement. Those clenched jaws, their sneering speech, the way one of them snarls “aisi ladkiyon ke saath aisa hi hota hai” (this is exactly what happens to such girls) capture their furious resentment towards women who dared to say no and now dare to ask questions. These are not creepy-looking fellows. That would have been the lazy casting choice to make. They are, in fact, exceedingly attractive. It is not their looks but their words and deeds that make them both scary and slimy.

Every tiny satellite role in Pink has been carefully cast, though my pick of the supporting players are Mamta Malik as investigating officer Sarla Premchand and veteran Dhritiman Chatterjee as the judge – they are both superb. Megastar Amitabh Bachchan plays Deepak Sehgal, a “manic depressive” retiree who re-dons his lawyer’s robes to fight for the women – his is the only awkwardly written role in the film and it shows in his slightly affected performance.

This is where Pink falters. It is not set up as a song-dance-and-dishoom-dishoom saga in the Damini mould, so you do not go to court expecting “dhai kilo ka haath” kind of dialoguebaazi. Pink does not head off completely in that direction through Sehgal, but it is certainly not as true-to-life in its judicial proceedings as you might expect from the treatment up to that point.

(Spoiler alert) In a film that gets so much else right, it is especially infuriating to watch that ridiculous scene in which Sehgal badgers one of his own clients to reveal intimate details of her sexual past in a crowded courtroom. Women’s rights movements worldwide have fought – are fighting – long and hard to end such intrusive, suggestive interrogations of women victims by defence lawyers. To have such behaviour from a woman’s own lawyer be projected as a clever legal move is bizarre.

Just as bizarre is the scene involving a woman victim claiming that she accepted money for sex, though she did nothing of the sort. Why did she make this false ‘admission’? Because she wanted to drive home a complex point that a woman is well within her rights to withdraw her consent once it is given. Even if you accept that a beleaguered, frustrated woman might speak impulsively when harassed in a witness box, it is unthinking of the film to suggest that she was being brave and intelligent not brainless. Really? That is an intelligent move in a system already stacked against women? Gimme a break. (Spoiler alert ends)

This is why in some ways I missed Rituparno Ghosh while watching Pink. No contemporary Indian film I have seen has as effectively and believably captured the torture a woman victim of violence is subjected to in court in the way Ghosh’s Dahan did. These instances of melodrama in Pink’s courtroom scenes are absolutely unnecessary since there is so much drama intrinsic to the situations anyway.

For the most part though, Pink maintains a realistic tone. Chowdhury seems to have a clear vision of what he wants to say and how. The air of tension he builds around the three women is almost palpable. It is tension that rights-conscious women can identify with as we live out our lives so constantly on edge that we ourselves may not notice our own instinctive actions and gestures of self-preservation – the fact that many of us avoid making eye contact with male strangers in public places especially in a culture of gender segregation where men tend to misconstrue affability, the manner in which our arms reflexively go up to cover our torsos in crowded spaces, the way we plan our safety while planning our schedules.

It is hard, therefore, not to be moved by the trauma and humiliation of Minal, Falak and Andrea who have to justify their life choices, their clothing choices and their tiniest moves before the world because one of them defended herself against an influential man who tried to rape her. Its flaws and that title notwithstanding, Pink is a powerful film.