REVIEW 666: MANIKARNIKA – THE QUEEN OF JHANSI 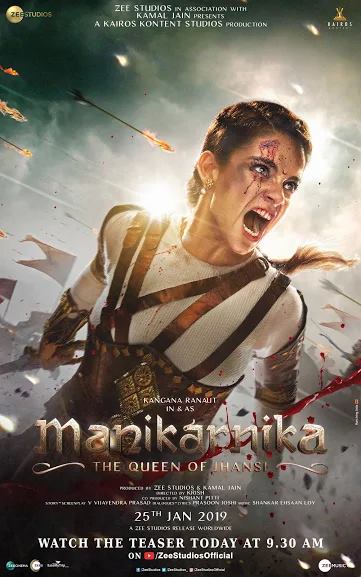 If you have ever visited the Jhansi Fort, you will have seen the prominent sign at one point on the outer wall that reads: “Rani Jhansi jumped from this place on the horseback with her adopted son” (sic). The poor grammar notwithstanding, it is a spot that gives me goosebumps, as did large parts of the first half of Manikarnika: The Queen of Jhansi in which we are introduced to the brave, young Manikarnika Tambe (rechristened Lakshmi after marriage to the king of Jhansi) whose unconventional upbringing included learning horse riding, sword fighting and other skills usually seen as a male preserve, and who went on to become the woman every Indian knows from our history texts as Lakshmibai, the Rani of Jhansi, one of the most prominent figures of the 1857 revolt against British imperialist rule in India.

The goosebumps continued in scenes showing the queen in battle, leading her people – men and women – from the front, her sari pallu secured around her waist, her flowing hair tied in a tight plait as she fired guns, swivelled her sword and felled enemy soldiers in large numbers. It is hard not to be moved by these passages because we know them to be true – Rani Lakshmibai actually existed and did all these things that 21st century women are still being held back from doing in a persistently patriarchal world.

Cinemas across the globe are dominated by male protagonists taking centrestage while women support them from the sidelines of life. India’s film industries, Bollywood included, are guilty of this crime as much as anyone else, rarely telling the stories of women or telling them from a female point of view. Whatever the follies of Manikarnika maybe, this is why it is important to record right at the start how inspiring and heartening it is to see Rani Lakshmibai played by Kangana Ranaut on her throne and in the thick of action on the battlefield. It is just as important to state upfront though that Lakshmibai in this biopic is fighting not British colonisers alone, but also the film’s own confused feminism that vies for space with its covert, almost laughable political agenda.

Manikarnika is directed by Ranaut and Radha Krishna Jagarlamudi (note: unlike in the trailer and other promotional material, Ranaut’s name precedes Jagarlamudi’s in the credits of the film). It is based on a screenplay by V. Vijeyandra Prasad who is best known across India as the writer of the Tollywood blockbusters Baahubali 1&2. In terms of ambition, Manikarnika mirrors the Baahubali films. However, the quality of the visual effects is vastly inferior to those two. While the palace and fort of Jhansi are imposing and attractive, too many of the battle scenes look plastic. Even Shankar Ehsaan Loy’s soundtrack is lacklustre, which is particularly disappointing coming as it does so soon after the brilliant work they did for Raazi just last year. 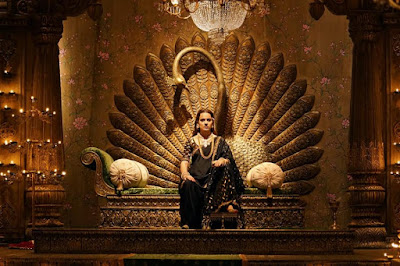 The truly impressive part of the spectacle in Manikarnika are the physical stunts executed by the actors, especially Ranaut’s comfort with swords. Even that moment when she leaps over three swordsmen to jump on to an elephant and stand imperiously on its back is fun to watch although it resembles a shot from Baahubali – fun because we so rarely see India’s women stars in this avatar.

Ranaut is lithe and lovely, the perfect choice to play this fiery queen whose feats were chronicled with admiration not just by her associates but also by her British opponents. She is so good through most of Manikarnika that it is possible to forgive her for her over acting in the climax. But the depiction of Lakshmibai’s free spirit and feminist father are at odds with the rest of the film’s gender politics, which includes portraying her husband, the king, wearing bangles to signify his frustration with his own servility to the British. The women’s jewellery on his wrists, he tells his wife in one of Manikarnika’s most cringeworthy conversations, is a reminder of his emasculation. Considering that this is a biography of a brave woman, it is bizarre that Vijeyandra Prasad and dialogue writer Prasoon Joshi chose to dip into that horribly regressive “chudiya pehno” (wear bangles) taunt thrown at men even today, which assumes that courage is a naturally male quality.

Equally bizarre and disappointing is the decision to end Manikarnika with a quote from Sir Hugh Rose, the commander of the British troops that the queen faced, describing Lakshmibai as the “only man” among the Indian rebels of 1857. Like those who thought it was high praise to call Indira Gandhi “the only man in her Cabinet”, clearly Team Manikarnika saw Rose’s words as the ultimate compliment one can pay a woman. I guess your patriarchal values are bound to reveal themselves when you are using a woman’s valour as a mere hook, a ploy and a gimmick to further your political agenda.

Manikarnika’s agenda is amply clear early on when Lakshmibai is shown standing up to the British right from the start. A reading of history texts will tell you that she was in fact not opposed to British imperialism and even through most of the 1857 revolt, was only interested in ensuring that they allowed her to retain control of Jhansi. In an essay published in Mint earlier this month, Manu S. Pillai cites a letter she wrote in 1854 imploring Governor General Dalhousie to permit her to rule until the ascent to the throne of her adopted son, with this assurance: “How loyal the Rajas of Jhansi have ever been (to the British); how loyal are their representatives; how strong are the inducements that they should continue to be loyal in the future.” Pillai adds: “It was only early in 1858, when many of her old friends... became confirmed leaders of the rebellion and she herself was being viewed with suspicion (by the British), that she made her final choice: a choice that saw her ride out bravely on horseback towards tragedy, and enshrined her in India’s national history.” (The words in brackets are mine.)

The truth is no less dramatic than Manikarnika’s highly fictionalised take on her story, but the truth would have required a more efficient writer with the ability to bring out the heroism of a flawed individual without camouflaging her flaws (or to bring out the evils of imperialism without casting terrible actors to play the British characters and giving them even worse dialogues).

Honesty is too much to expect though from this tacky, sermonising screenplay which completely dispenses with polish while pushing its covert pro-BJP, Hindu nationalist agenda, resulting in some unwittingly comical scenes. Prasad and Joshi are not the first people to further the myth that the 1857 revolt was inspired by a love of Bharat rather than by sepoys and monarchs furthering their own personal interests. They must get credit though for the laughable scene in which Lakshmibai sends the Scindia king of Gwalior scurrying off in fear simply by standing before him and hissing the words “Scindia, rajdrohi”. It is no coincidence that the most successful male Scindia of the moment is a member of the Congress party (and I guess we must pretend that several of his female relatives are not/have not been in the BJP). The actor who plays the king caricatures him, of course.

The film descends further from there, ending with Lakshmibai walking into flames that turn into the Om sign as she stands burning with pride.

Kangana Ranaut is born to be an action star, but she needs to evolve as a director.

Rani Lakshmibai was a great woman. She deserves better than a poorly written film that chooses to use her for its own self-serving ends.