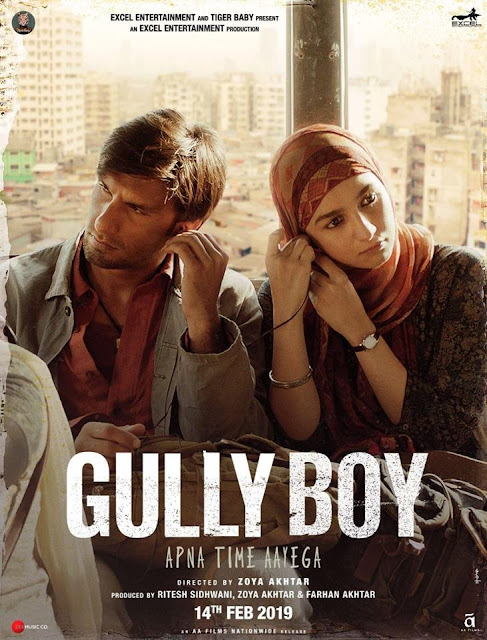 A young man has been waiting outside a stadium where a musical show is taking place. He is one among the number of drivers whose wealthy mistress is in the audience inside. For a while now he has been listening to the pulsating sounds emerging from within, and then, in a manner that tells us he can finally no longer hold back, that he cannot help himself any more, he begins striding purposefully towards the performance venue.

As he gets closer though, a security person spots him. There is no noisy confrontation between the two men, just a firm look from that hefty uniformed guard we see only from a short distance and a slight, dismissive wave of the hand, brushing the youngster aside like dust off a carpet, as if to emphasise his insignificance.

In another scene, one of the most beautiful passages in writer-director Zoya Akhtar’s Gully Boy, Murad is driving the same mistress and her parents in their spacious, gleaming sedan one night. The father and daughter are having an argument – she wants to begin working right after her graduation, he wants her to study further. Everyone is a graduate these days, graduation means nothing, the Dad tells her, before asking Murad how far gone he is with his education. I am about to complete my graduation, comes the reply, at which point, as if Murad is deaf and invisible even while he is seated among them, the rich man asks the girl if what she wants for herself is to be at this fellow’s “level”.

There is so much happening in that seemingly low-key scene. The cruelty of the master’s words, the barely discernible look on the daughter’s face that suggests confused disapproval of her parent’s inhumanity, and the treatment the storyteller metes out to the older man (Mohan Kapur) – the camera opts not to show us his face, treating him instead with the same disdain that he displays towards Murad.

Akhtar’s decision to erase or blur those who erase and blur Murad is important, because Gully Boy is an ode to the Murads we don’t see, the drivers outside who do not get to enter the stadium, the chap in our midst that we ignore in our conversations.

Set in Mumbai’s underground rap scene, Gully Boy tells the story of the impoverished Murad’s journey from being forced into jobs he does not want, to his determined pursuit of his music dream. Supporting him on this road is his long-time girlfriend Safeena Firdausi (Alia Bhatt), a fiery, short-tempered medical student who has her own battles with family conservatism she must fight.

Gully Boy is inspired by the lives of Mumbai rappers Naezy and Divine (a.k.a. Naved Shaikh and Vivian Fernandes respectively), but it is not a biopic. Like Murad’s being, every cell of this film beats with and for the art form to which it pays tribute. The music is so powerful that it has the strength to make a committed rap fan out of a rap virgin.

The writing by Reema Kagti and Akhtar rarely misses a step, completely immersed as the screenplay is in the socio-economic realities of its crowded, filthy slum setting and the present-day socio-political reality of the India in which that slum is set.

Rap numbers by a bouquet of writers are a constant in the narrative, either performed on screen in lava-like eruptions by various artistes or playing out in the background. The incessant swings to and from, in and out of these energetic, audacious compositions are handled deftly by editor Nitin Baid.

Cinematographer Jay Oza (Raman Raghav 2.0, Blackmail) keeps things personal, staying close to his principal characters except in the impressive opening scene and when he pointedly zooms out a handful of times to offer us an eyeful of boxy, cramped Dharavi.

To the outsider unaware of India’s current troubles or cineastes who prefer viewing films divorced from the global and national context in which they emerge, Gully Boy may seem like just a coming-of-age / rise-to-stardom / rags-to-possible-riches drama. But it is not. This is an era of right-wing dominance, the mainstreaming of extremism and chest-thumping nationalism, or as Dub Sharma puts it in Jingostan beatbox featured in the film:

(Rough translation: It is 2018, the country is in danger / You are in the midst of the flames that have engulfed us / Scream out loud and scare everyone / Draw everyone’s attention with your poisonous agenda... / Hail the land of jingoism.)

Jingostan beatbox is arguably the most forthright political comment to emerge from an otherwise largely cowardly Bollywood in recent years.

Rap becomes a tool to spell out Gully Boy’s position on multiple prickly issues in a hugely entertaining fashion without sounding like sermons. Much is also said via the storyline sans bhaashanbaazi. This gives the narrative a fine balance between allusions and open declarations, making it both fun and unapologetically political.

Islamophobia, for one, is referenced in a conversation overheard from another room. Murad’s most unwavering ally and fellow musician MC Sher is introduced in an emphatically feminist, massively enjoyable sequence, but the feminism of the rest of the film – its take on gender segregation, discrimination in education, the hijab, domestic violence and more – emanates from the life stories being told.

The Muslimness of the leads is neither over-emphasised nor underplayed. This is in keeping with the evolution of the portrayal of Muslims in Bollywood from a pre-2000 positive stereotype and characters whose religious identity was an overriding factor, to present-day Hindi cinema where the likes of Akhtar normalise the Muslim community, giving us the good, bad, wonderful and ugly just as they do with the majority community.

Gully Boy is not without its rough edges. Male infidelity is usually humourised in Hindi cinema. Here it is not dealt with lightly, but is certainly forgiven with a speed and casualness that is uncharacteristic of the female partner facing it and thus unconvincing. The tone of the film is just as generous towards the man in question in this matter. At this juncture alone, it feels like the writers did not quite know what to do other than hurry past this failing in a character they otherwise want us to like.

The screenplay also papers over class divides on the music scene. A deliciously furious duel of songs between the hero and an uppity rival (insult rap is what it should be called, if that term does not already exist) gives us a clear view of what our man is up against, but it is soon glossed over by the film’s talent-conquers-all idealism.

What does indeed conquer all in Gully Boy are its songs, with their addictive rhythms and volcanic poetry. To watch the birth of Apna time aayega in particular (composers: Dub Sharma and Divine, singer: Ranveer Singh, lyrics: Divine and Ankur Tewari) is a special experience in itself.

Singh embodies Murad as he drowns out his naturally flamboyant personality to play a shy, angry yet optimistic youth whose words have the ability to crush a harsh opponent in a way fists never can. His body looks better nourished and more carefully sculpted than you would expect from a person in his dire circumstances, but his physique is wisely not displayed often enough to distract from the believability of the rest of him.

In real life, at least in public, Singh is more Simmba – his last screen character – than Murad. It is impossible to remember the Simmba in him though while watching him here.

His brilliance is matched scene for scene by the devastatingly good Alia Bhatt who has a comparatively smaller role but owns Gully Boy as much as he does. The writers have ensured that Safeena is not merely a satellite revolving around Murad. Her battles are a crucial element in the screenplay’s study of the social milieu he inhabits, in which his art is initially suppressed and ultimately blossoms.

Zoya Akhtar has shown remarkable maturity from her very first feature, Luck By Chance (2009). In Gully Boy she displays the same clarity of vision she had when she started out.

For a film that is about protest music, the music of anger and rebellion, Gully Boy is surprisingly quiet and extremely funny. Its understatedness and sense of humour are among the multiple reasons why it is also one of the best films to emerge from the Hindi cinemascape in recent times.