ARTICLE 15, GULLY BOY AND A HANDFUL THAT SHONE IN AN OTHERWISE ANNUS HORRIBILIS

2019 has been the worst year of an already problematic decade for Bollywood, the Mumbai-based (primarily) Hindi film industry that gets a disproportionate amount of attention from the so-called ‘national’ media in comparison with India’s other film industries. Islamophobia and pro-establishment messaging were the dominant trends in Bollywood this year, while quality and depth took long vacations from theatres. So few films left a lasting impact, that instead of compiling my usual annual list of best 10, this time I have stopped at nine. 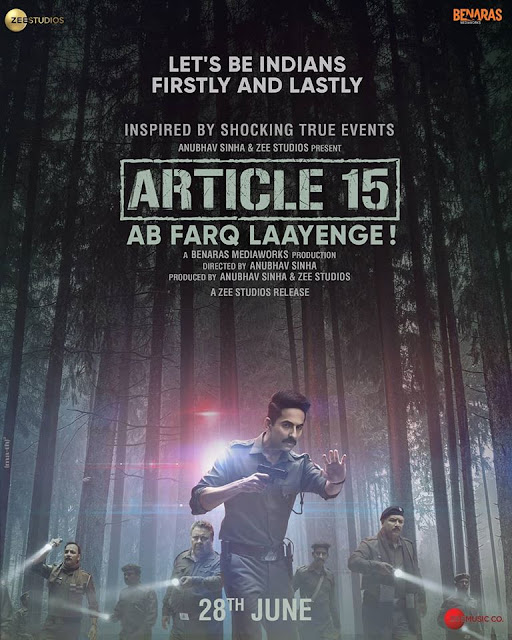 (Note: This year I have kept this list to theatrical releases, although next year I will in all likelihood expand it to cover direct-to-online releases too.)

Here is my pick of the saving graces in this annus horribilis.

Unlike India’s other film industries, Bollywood in recent decades has largely ignored the very existence of the caste system. The most powerful Hindi film of 2019 though put caste at the front and centre of its storyline. In Anubhav Sinha’s Article 15, Ayushmann Khurrana plays a Brahmin policeman who is schooled in this oppressive social practice when two Dalit girls are raped and murdered in a UP village where he is posted. Among a bouquet of beautifully written, beautifully acted characters, the ones whose journey ought to spawn a sequel, prequel or both are the Dalit activists Gaura and Nishad, played by Sayani Gupta and Mohammed Zeeshan Ayyub.

Article 15 combines great courage with great storytelling. I choke up even now at the thought of Vande Mataram woven into the narrative in a soul-stirring scene that vehemently reclaims it from today’s aggressive nationalists who have weaponised patriotism and patriotic songs. 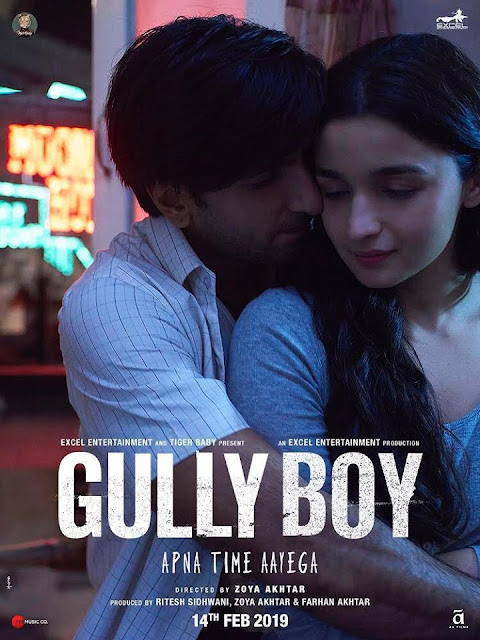 A marginalised genre of the arts meets a poor man from a marginalised community in Zoya Akhtar’s stunning Gully Boy inspired by the lives of Mumbai rappers Naezy and Divine. In spite of rap’s massive popularity, many traditionalists still do not acknowledge it as literature or music. Akhtar snubs them through the medium of a Muslim driver from a Mumbai slum who dreams of being a rapper. Ranveer Singh is flawless as the shy youngster whose seething resentment towards those who seek to invisibilise him erupts in his rebellious writing. Alia Bhatt is superb as his  girlfriend who is fighting massive battles with patriarchy. The top-notch cast also includes one of the big discoveries of this year: young Siddhanth Chaturvedi.

Gully Boy is technically slick, unapologetic about its politics and brimful of brilliant poetry. One of the joys to be derived from it comes from watching the hero’s creative process, from actually watching his songs take birth on screen. In its own unique way then, it is a procedural. At a time when most of Bollywood is bowing and scraping before the present government, it takes a special person to feature Jingostan beatbox in a mainstream commercial film. And Apna time aayega (Our time will come) is an anthem for every human being who has known what it is to be discriminated against, sidelined or ignored by a dominant social group. Gully Boy is gut-wrenching cinema from a gutsy filmmaker.

(For the full review of Gully Boy, click here) 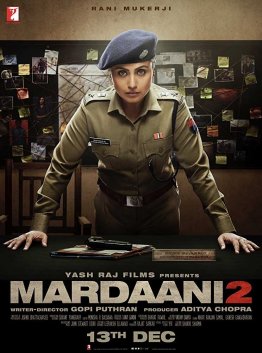 Rani Mukerji returned this year as the genius cop Shivani Shivaji Roy from 2014’s Mardaani who wastes no time on hollow politeness and bruised egos. The off-putting title notwithstanding, writer-director Gopi Puthran’s Mardaani 2 is a sharp, incisive critique of how patriarchy reacts when it encounters a questioning woman. Mukerji’s immersive performance in this suspenseful thriller makes for a potent combination with the antagonist played by TV’s Vishal Jethwa who gives us one of the eeriest, creepiest, most convincing villains seen on the Hindi screen in a long while. For a change, a genuinely feminist film from Bollywood, not a film pretending to be feminist while camouflaging a conservative core.

Banditry in the Hindi heartland is resurrected on the big screen in one of the most underrated, under-marketed and therefore, sadly, under-seen films of the year. Abhishek Chaubey’s Sonchiriya stars a spectacular cast – Sushant Singh Rajput, Bhumi Pednekar, Manoj Bajpayee and Ashutosh Rana among them – inhabiting a story of outlaws traversing a dusty north Indian hinterland. These are not the conventional daakus (dacoits) commonly seen in an earlier Bollywood. They are not fearsome and lionised, but instead tired of this off-the-grid existence. And baaghi (rebel) is the label they prefer for themselves.

Sonchiriya’s stark messaging is enhanced by Anuj Rakesh Dhawan’s austere cinematography. The film has the courage to speak truths that even most liberals avoid: such as the fact that women are subordinated across all castes including by the most exploited. It also reminds us of a reality that too many men fail to see while they enjoy the powers most societies bestow on them: the reality that while patriarchy marginalises all women, it also extracts a heavy price from men. 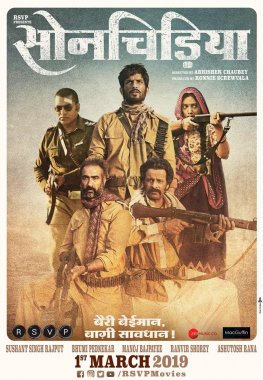 Priyanka Chopra Jonas and Farhan Akhtar show remarkable restraint playing parents of a child born with a potentially fatal disorder in Shonali Bose’s The Sky Is Pink. Despite being a saga of death foretold, the film is about hope as much as it is about despair, the value of every second we have on earth as much as it is about our inevitable ends. Grief and positivity are life-long partners in this poignant account of a couple whose relationship survives every loving parent’s worst nightmare.

(For the full review of The Sky Is Pink, click here) 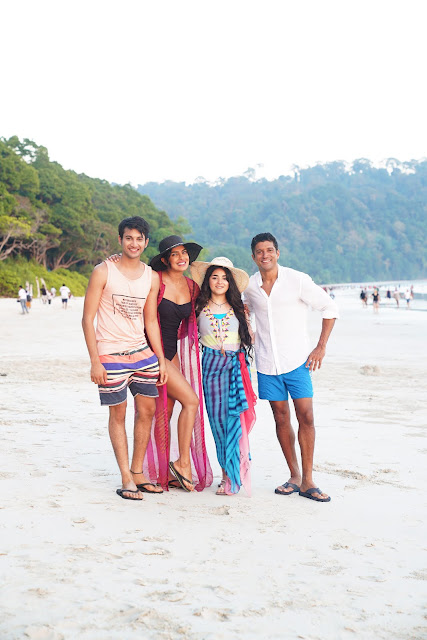 Two women in rural north India happen to pick up guns for the first time in their 60s and end up becoming successful competitive sharpshooters. It is surprising that Bollywood took so long to chronicle the real-life story of UP’s now-octogenarian Shooter Daadis, Chandro and Prakashi Tomar, but when it finally did, the result was Tushar Hiranandani’s entertaining, uplifting, socially insightful film.

Bhumi Pednekar and Taapsee Pannu are in top form as Saand Ki Aankh’s leading ladies, and Viineet Kumar is sensational as their supportive coach. The film has drawn considerable flak for casting young female stars as the elderly leads, but even this starting-point flaw does not mar its heartening celebration of feminine fortitude.

(For the full review of Saand Ki Aankh, click here) 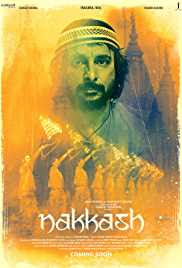 A Muslim artisan practising his craft in a temple in one of Hinduism’s holiest cities is the fulcrum of Zaigham Imam’s Nakkash. Inaamulhaq plays Allah Miyan who becomes an object of conservative Hindu wrath in Varanasi when his steadfast patron, the temple chief priest (Kumud Kumar Mishra), refuses to be influenced by bigots. Islamophobia is so rampant in today’s world that many well-meaning liberals now steer clear of addressing Muslim fundamentalism in their works. Imam, thankfully, has no such qualms. The director is as unsparing in his take on how Allah Miyan is ostracised by his fellow Muslims as he is in his indictment of fundamentalists from the majority community. Nakkash is a moving saga of love and hate, innocence and venom residing side by side in a communally charged universe.

8: No Fathers In Kashmir

The spotlight falls on half widows, missing men, sexually exploited women and conservatives with double standards in Ashvin Kumar’s No Fathers In Kashmir. It should surprise no one that this film came to theatres after a long battle with the Central Board of Film Certification which initially – unfairly – awarded it an A (Adults only) rating. Contrary to the current popular discourse that demonises Muslims, or for that matter an earlier Bollywood era that tended to paint the entire community with a positive brush, this film sees Kashmiri Muslims as regular people – good and bad, evil and virtuous, and all uniformly troubled.

Despite the harshness of the reality it examines, a tenderness pervades No Fathers In Kashmir because of its decision to explore the state through the wanderings of two artless children. Their charming sweetness ends up further underlining the bitterness and hopelessness that have beset care-worn Kashmir.

(For the full review of No Fathers In Kashmir, click here) 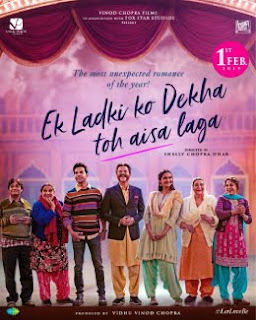 Of the very few Hindi films made on LGBT+ persons, most have chosen to focus on men. In that sense, Shelly Chopra Dhar’s Ek Ladki Ko Dekha Toh Aisa Laga this year breaks new ground by relating the story of two women in love. It goes many steps further by staying doggedly mainstream in its format and upbeat in its tone, busting prevailing stereotypes by casting a glamorous mainstream star as the lesbian heroine, and treating her neither as a source of comedy nor tragedy. Sonam Kapoor Ahuja plays Ek Ladki’s Sweety Chaudhary, while Anil Kapoor plays her father, a man whose heart lies in a profession considered unsuitable for men. Through his presence in the plot along with characters played by Juhi Chawla and Rajkummar Rao, the film stretches its discussion beyond gender in romantic relationships and extends it to the suffocating nature of all forms of gender stereotyping, prejudice and straitjacketing.

The title harking back to the most iconic song of Kapoor Senior’s career, is among the many factors that makes Ek Ladki Ko Dekha Toh Aisa Laga one of 2019’s most heartwarming films.

Director’s Cut: Tushar Hiranandani on Bhumi, Taapsee and ageism, Saand Ki Aankh’s Shashi Kapoor connect, misogyny and why he won’t do another Masti


Best Mollywood Films 2019: Kumbalangi Nights, Virus, Unda and more in perhaps the best year ever for God’s Own Cinema

Mollywood Awards 2019: Parvathy or Anna? Uyiril Thodum or Jaathikkathottam? Mammootty or…? A pick of the year’s best work