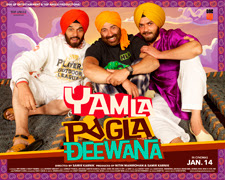 What do I say? Every once in a while a film comes along that makes you want to reach out across the hall over the heads of your fellow viewers and affectionately pat the face of the star on screen. In Yamla Pagla Deewana, Bobby made me laugh, Sunny made me smile, but maa kasam I’m telling you … I quietly hugged Dharmendra close to my heart every single time he appeared on screen and I sighed and silently said, Aww!

That sentiment kind of sums up YPD for me. It’s an unapologetic Deol vehicle unabashedly riding on the goodwill that this family enjoys so much among us, and paying tribute to their three careers, to the minuses that critics have repeatedly picked on in the past and to the pluses that both critics & audiences have embraced. And it does all this in an often cheesy but utterly loveable, endearingly self-deprecating fashion.

When Sunny is shown trying to extract water from a hand-pump, Bobby asks him cheekily if he intends to uproot it (and perhaps throw it at the girl’s stubborn family? … since the Pakistan army is not available here? … what do you say ji?) Towards the end of the film, in the midst of a long-drawn-out fight sequence in – what else but – a godown, Sunny announces that aukaad dikhane ka time has come. He then opens his mouth wide and lets out a ear-splitting yell that shatters the glass in the godown, sends people flying in different directions and had me collapsing in a heap of laughter in my seat. Even the famed Deol left feet got me unconsciously putting my hand to my heart and saying for the nth time as I watched this film, Awww!

I say all this although there is also much to criticize in YPD. It starts off slow, the climax is inexorably stretched, and the entire film could have been chopped down by half an hour (which is an awful thing to say about any film). There are many decidedly unfunny parts. Some of the references to the Deol family are a little too self-indulgent and in-your-face to be charming … like that moment in the climax fight when Bobby says to no one in particular, “If Dharam and Sunny are here fighting, what should Bobby do? Romance, of course!” Doesn’t work! The interactions between the Maaaa (Nafisa Ali) and Sunnybeta are grating. The additional track about the heroine’s brother’s political career seems unnecessary. A couple of the songs are completely tuneless. And why was Dharampaaji given less screen time than his sons?!

But chhad yaar, ki farak penda …. ’Cos there is also so much to praise.

The title track is a heart-stopper and Pal pal na maane tinkoo jiya is a foot-tapper. It’s also nice to see that though YPD is meant to be a platform for the Deols, director Samir Karnik has paid some attention to his supporting cast too. Hindi films featuring “white people” in ancillary roles often serve us embarrassingly bad actors. Look no further than the ad agency honcho in this week’s other release Turning 30, or the cops in the mega-budget Hrithik-starrer Kites. But in YPD, Australian actress Emma Brown Garrett shines as Sunny/Param’s gori mem wife whose English is peppered with Hindi and Punjabi. Mukul Dev as the drunken Punjabi sod is fun. Kulraj Randhawa as Bobby’s girlfriend Sahiba shows a spark that goes beyond her undeniable good looks … as they say in Hindi film circles, ladki mein kuchh hai. And Sucheta Khanna is hilarious as Sahiba’s Caneda-crazed relative Poli who ogles Bobby/Gajodhar as she says, “Tussi bade impotent ho ji.”

A bit about the story here. In YPD, Sunny plays an honest Punjabi NRI Paramveer whose parents split up when he was a child. Param now lives a comfortable life in Canada with mom while his father Dharam and younger brother Gajodhar revel in their careers as conmen in Banaras. Param visits India to re-unite his family. But before he converts a matlabi Dharam and Gajodhar, he must wrench Gajodhar’s messy love life from the clutches of his lady love’s numerous brothers.

And that’s the way it is. YPD is aimed at Deol fans willing to forgive the film its many flaws, and for those in the mood to throw logic out of the window and perhaps on to another continent altogether. I mean, if you really sit down to think about it, how in biology’s name could a 50-plus Anupam Kher be cast as the brother of 20-something Kulraj? O fortunate mother who begot two children so widely separated by age and rivalled perhaps only by Amitabh Bachchan and Ash playing siblings in the 2002 film Hum Kisi Se Kum Nahin! And how in the name of genetics do you explain the all-out-100%-Indian appearance of Sunny/Param’s sons despite being children of a brown daddy and white mommy?

Whatever! This film works best if you’ve followed 1970s & ’80s Hindi cinema as also the careers of all three Deols. During a hold-up at a store in Canada, when the crook dares to spit out these words at Sunny/Param, “To hell with your mother and wife”, you just know even before it happens that that dhai kilo ka haath will be raised.

But over and above everything else, YPD is a tribute to Dharmendra. This is a versatile actor who could pull off a Satyakam, a Sholay and a Chupke Chupke with as much ease as the dishum-dhoom-dhadaaka that too many people now remember him for far more than his acting skills; an actor who did himself in with the films he chose through part of the ’80s and the entire ’90s. And yet, this is a star who is remembered with so much affection that when you see him dance to the title track of Yamla Pagla Deewana, you can’t help but rewind to 1975’s Pratiggya in which the song was originally featured; and you realise that at the age of 75 he may not be as sprightly as he was back then, but I tell ya he can still make ya smile … And you quietly hug him close to your heart and sigh and silently say, Awww!

The song resurrected for the 1991 film Farishtay featuring a 56-year-old Dharmendra & a much younger Jaya Prada. Uh oh! http://www.youtube.com/watch?v=1QX20ajdEmE&feature=related