Release date: January 28, 2011
Director: Madhur Bhandarkar
Cast: Ajay Devgn, Emraan Hashmi, Omi Vaidya, Shazahn Padamsee, Rituparna Sengupta, Tisca Chopra, Shruti Haasan, Shraddha Das
“Love Grows … Men Don’t” says the tagline of this film. But what about the films men make?
Dil Toh Baccha Hai Ji is director Madhur Bhandarkar’s first shot at a romantic comedy after a decade of giving us his gritty, straightforward, no-frills take on the grimy side of Mumbai. So what we have here are three men with love stories as different as different can be. Naren Ahuja (Ajay Devgn) is a decent sort of chap going through a bitter divorce. When he shifts out of his marital home into his parents’ empty house, he takes in a couple of paying guests to counter the loneliness. Enter, playboy Abhay Suri (Emraan Hashmi) and the world’s most earnest virgin Milind Kelkar (Omi Vaidya). 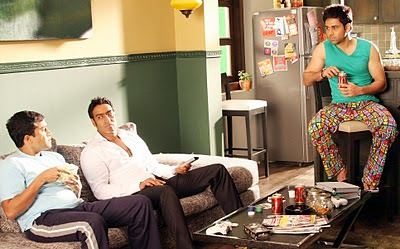 Abhay is a gym instructor who beds wealthy women in exchange for a lavish lifestyle. Currently unemployed, he’s having an affair with former Miss India Anushka Narang (Tisca Chopra) who maintains him to occupy the empty spaces in her married life. Milind is a matrimonial bureau employee who writes bad poetry in his spare time, while safeguarding his chastity for that one woman he thinks he’s meant to be with. He falls hard for RJ Gungun and refuses to heed his friends’ warnings that she’s ruthlessly using him to further her own movie-star ambitions.
Add to this mix Naren’s own emerging romance. He’s falling for the new intern in his office, though well aware that she’s half his age.
It’s a story filled with promise … but though Dil Toh Baccha Hai Ji works in parts, for the most part it’s a let-down.
The biggest problem with this film is the dialogue writing that reeks of wannabe-cool. Are mature grown-ups actually expected to laugh at the voiceover about the three Fs in Abhay’s life: fun, flirtation and teesra F tho aap jaante hi honge?! It’s the sort of line that might have had you in splits in the years bordering puberty, when the use of the word “sex” or thereabouts was enough to elevate a drab anecdote to the status of a “joke”.
Too many of the conversations in this film seem designed to give characters an opportunity to throw smart one-liners at each other. And too many of those supposedly smart one-liners are not so smart at all. The ones who suffer the most at the hands of this cheesy writing are Nikki (Shruti Haasan playing the woman Abhay genuinely falls in love with) and Abhay himself. Emraan Hashmi still has the acting chops to make Abhay’s corny lines tolerable. But the very pretty Ms Haasan’s strained dialogue delivery further exacerbates our pain. When Nikki’s parents talk about dad having aloe vera juice at breakfast, and she grabs the chance to quip about getting their “juices flowing”, I cringed.
I cringed even more at the film’s two gay characters who must rank among the crudest portrayals of homosexual persons seen in popular Hindi films in recent years.
But the biggest disappointment for me is the depiction of some of the women in this film. Bhandarkar showed an acute understanding of the female psyche in his earlier films Chandni Bar, Page 3, Corporate and Fashion. But his Gungun, for one, is a product of confused characterisation. I’m not saying hard-nosed, hard-hearted women like her don’t exist. But if this particular hard-nosed, hard-hearted woman genuinely had a change of heart as we are shown part way through the film, then her actions in the end are inexplicably abrupt, and seem to have been written simply to fit into the denouement that the director and writers are purposefully heading towards.
A word about the music. Abhi kuchh dino se and Tere bin are hummable and well shot. As for the rest of the cast apart from Emraan and Shruti, well most of them do a decent job except for the actor playing Anushka Narang’s husband who is, to put it mildly, omigawdawful! Omi Vaidya is amusing and fits the part, but if I see a third film in which he plays exactly the same guy he did on debut in 3 Idiots, I think I may shake him by the shoulders and ask him to go stand in a corner and hold his ears. If ever there was an actor who is allowing himself to be typecast at the very start of his career, it is he, it is he, it is he. 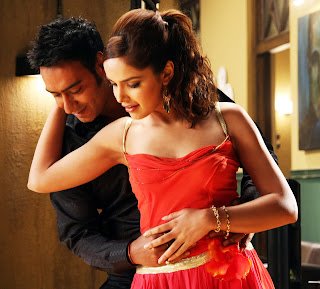 The film does work in stretches. And foremost among those stretches are the scenes devoted to Ajay Devgn and Shazahn Padamsee. To be fair to the others, these are the two characters who are best-written, and who have been given the least trite lines. But that shouldn’t take away from the pat on the back they both deserve for bringing a certain earnestness to their performances as Naren, the boss falling in love with the new kid at office, and that new kid herself, 21-year-old June Pinto.
Shazahn’s performance underlines the fresh appeal we saw in her debut film Rocket Singh: Salesman of the Year in 2009. As for Devgn, in recent years, all the way up to Raajneeti and Once Upon A Time in Mumbaai, as a viewer I’ve become concerned that he’s been repeating himself – same couple of intense facial expressions, same deportment, same body language. But in Dil Toh Baccha Hai Ji he lightens up, showing us a side of him we’ve seen in the recent past only in Athithi Tum Kab Jaaoge. Almost a decade back, Devgn had tried his hand at an out-and-out comedy in Hum Kisi Se Kum Nahi with disappointing results. Athithi… and DTBHJ show that he’s come a long way since then.
It’s in the interactions between June and Naren that Bhandarkar manages to convey the most warmth, sincerity and humour in DTBHJ. Witness the scene in which June and her friend confide in the middle-aged Naren about the other middle-aged men at work who are making passes at her, men who are going through “a mid-life crisis” the girls explain artlessly. The Naren-June relationship in the film works because no one’s trying to be witty or smart here, and the writers have kept it simple.
In fact, the appeal of all Bhandarkar’s earlier films have been their simplicity, and the director’s easy style of story-telling that made you feel you were watching life as it was happening before your eyes. All he need have done in DTBHJ was to focus on his strengths and be true to himself.
I’d recommend this film only to committed Ajay Devgn / Emraan Hashmi fans and to die-hard Bhandarkar-ites in a generous mood.
Rating (out of five): **
PS: On a different note, the A-certificate awarded to this film is a perfect example of this country’s unreasonable, inconsistent film censorship system. Ghajini got a U/A despite its extreme violence. The innuendo-driven Kambakkht Ishq got a U/A too. Could someone on the Censor Board please explain the Adults-only rating for Dil Toh Baccha Hai Ji?!!!
Posted by Anna MM Vetticad at 1:09 AM