Release date: January 21, 2011
Director: Kiran Rao
Cast: Prateik, Monica Dogra, Kriti Malhotra, Aamir Khan
Dhobi by day, rat killer by night, some day he hopes to become a movie star.
NRI investment banker on a sabbatical, photographing a world beyond hers, one day she falls unexpectedly in love.
Young bride in the city, wrenched away from her beloved small town, one day she just gives up.
Artist by profession, a****** by temperament, one day he chances upon some videos that spark  off something within him.


Bring them together in Mumbai and you get Dhobi Ghat (Mumbai Diaries), debutante director Kiran Rao’s affectionate portrait of the metropolis that she has made home.
Dhobi Ghat is an uncommon Bollywood film. It’s just 95 minutes long. It has no interval. It’s as much in English as it is in Hindi. And though it stars Aamir Khan, he is not the central character. If anything, it draws our attention to some remarkable young talent out there who are so easy before the camera that it’s impossible to believe some of them have not done this before 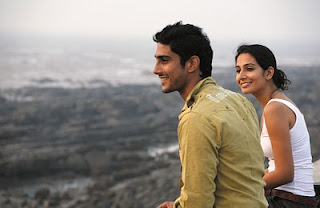 Singer Monica Dogra is Shai the NRI in whose sub-consciously compartmentalised existence she has fallen for Aamir’s eccentric, much older painter Arun on a one-night stand; while in another neat cubicle of her life she befriends Munna as she tries to get to the heart of Mumbai with her camera. Prateik as Munna reminds us why we loved him so much in that cameo in Jaane Tu Ya Jaane Na. In Dhobi Ghat – his first full-fledged role – he takes on the complexities and confusions of the charismatic young washerman who has known hunger, who has worked hard enough to now have his own little stash of cash, and who realises that his goal of becoming a marquee name is far more attainable than the memsaab he’s fallen in love with. Watch him in that moment when he sees Shai for the first time in Arun’s house and the camera switches to his back as the door shuts: in the gentle droop of his shoulders you hear the heartbreak. 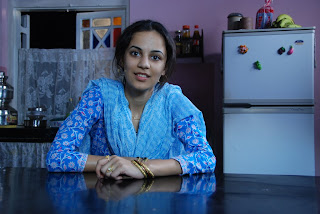 But my personal pick of the cast is newcomer Kriti Malhotra as Yasmeen Noor whose video letters to her brother fall into Arun’s hands. She had perhaps the biggest challenge in this film since Yasmeen is the character whose background we know least about – we see her life only in flashback through three videos she recorded to mail to her sibling. The twinkle in the newly wed’s eye gives way to fatigue and finally despair. We are never told what ultimately pushed her over the edge, but that doesn’t take away from the pain we feel at the fading glow on the once-sparkling girl’s face. 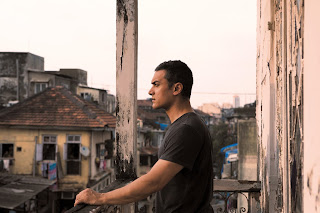 As for Aamir Khan, for me at least, Dhobi Ghat is the film in which the actor has finally come to terms with his age. For almost a decade now, even more than his contemporaries, Aamir seemed to have been resisting the advancing years to embarrassing effect – as a college student at the start of Dil Chahta Hai in 2001 and again in Rang de Basanti and 3 Idiots. In Dhobi Ghat, thankfully, the camera celebrates his age and every wrinkle and line that accompanies it. And Aamir is not playing Arun here. He is Arun.
So Dhobi Ghat is neither only about the glitzy city that forms a backdrop to so many mainstream Bollywood films; nor only about its underworld most recently chronicled to great commercial kudos in Once Upon A Time In Mumbaii; nor only about its poverty and sleaze so wonderfully captured by Mira Nair’s Salaam Bombay and Danny Boyle’s Slumdog Millionaire. It’s about those anonymous people you see on the sidewalk or brush past at a high-brow party in a megapolis, rarely having the time to stop and discover their colourful back stories.
The film boasts of many little touches that add up beautifully. Like the loner Arun sipping his drink on a balcony, reaching out and letting the rain into his glass. Like the NRI rich kid who thinks nothing of inviting a dhobi for coffee into her house but whose maid nevertheless serves the beverage in a glass for him and a China mug for her. Like that aspiring-to-be-an-actor dhobi who wears a T-shirt of The Doors because it’s cool but clearly has not a clue who they are. And like the artist who chooses to live in a crummy neighbourhood though of course he can afford those Marc Jacobs and Calvin Klein tees.
But Dhobi Ghat is elevated to another level altogether by director of photography Tushar Kanti Ray who switches between formats and styles with ease. The home videos for Yasmeen’s story are a really nice choice. Also top-notch is the art work by Ravi Mandlik. Unlike so many Hindi films where women are shown applying make-up on already-made-up faces and artists are shown running brushes over already-completed works, we actually see Aamir painting here.
There have been other cinematic odes to cities. My favourite is that captivating volume of short stories Paris, Je t’aime. Nearer home, Mumbai Cutting was much more of a mixed bag but neat on the whole. Dhobi Ghat is different in that its four stories intertwine.
The film eloquently captures a certain poignancy in the lives of Mumbaikars, aided by a haunting score by Oscar Award-winning musician Gustavo Santaollala whose CV includes Brokeback Mountain and Babel. What I missed though was the city’s infectious energy – in the narrative and in the score.
I also have some questions that are really bothering me, Kiran: if Yasmeen recorded those videos for her brother, why did she never send them to him? And I’ve met enough Bihari taxi and autorickshaw drivers in Mumbai to wonder if Munna isn’t a tad too sophisticated to be real. If Prateik portrayed the emotions of his character so well, why not the demeanour? The characterization of Shai too left me dissatisfied. Here was a warm, open-hearted girl with nothing in the story hinting at a selfish streak in her: am I really to believe then that she didn’t realise that Munna was falling for her? Or did she know and not care?
Be that as it may, while I can’t say I found Dhobi Ghat entirely enthralling, I certainly liked it very very very much. My friend with whom I watched it asked me, “So, what is the conclusion?” Of course there is none unless you decide to arrive at one yourself. If I were to shoot a few days in your life, what would be the conclusion?
In one of the most enchanting scenes in this film, Yasmeen videotapes her all-Maharashtrian maid’s shy daughter who is studying in Class 10 “English medium”. Either by design or by coincidence, the girl recites Alfred Lord Tennyson’s The Brook. She didn’t get to that poem’s most memorable line though:
“… For men may come and men may go, but I go on forever ...”
It’s a line that pretty much encapsulates the story of Mumbai. And if you think about it, that’s the whole point of Dhobi Ghat.
Rating (out of five): ***1/2
Posted by Anna MM Vetticad at 3:22 PM