Release date: January 14, 2011
Director: Alankrita Shrivastava
Cast: Gul Panag, Tillotama Shome, Jeneva Talwar, Purab Kohli, Siddharth Makkar
Language: Mostly English, some Hindi
After the rain comes the sunshine.
Seriously.
Since the Indian Met Department gets its predictions wrong so often, you can turn instead to Naina (Gul Panag) in Turning 30!!! whose voiceover gives us weather reports such as these plus other superficial ‘insights’.
In a film industry that rarely offers this much space to a leading lady, Turning 30!!! is the worst kind of showcase you could find for the life of a young Indian city girl just entering the fourth decade of her life. 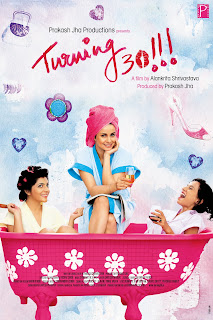 O wait! Did I call her “young”? Silly me! Naina is 30 which, according to the film, is the start of middle age, wrinkles, disinterested men, misery and sagging breasts.
This would not be such a problem if these were the views of the heroine alone, or a couple of the characters in the film – no doubt there are some women out there crossing 30 who worry that they’re getting middle-aged; no doubt there are many girls in their 20s who think 30-plus is old. The problem is that this film may be telling the story of one woman but positions itself as the story of Everywoman.
In spite of its desperate effort to appear cool and forward-looking, Turning 30!!! is nothing but a cliché-ridden film repeatedly underlining every stereotype about ‘liberal city girls’ that there is. It’s anxious to match the tone of Sex and the City. It’s a wannabe Bridget Jones Diary. It’s one of the most regressive films on single women I’ve seen. And it’s far more dangerous than most because (like Bridget Jones) it disguises itself well.
So Naina in Turning 30!!! is a rising ad exec with a cute boyfriend and good friends. Then all at once, her boss threatens to fire her, she is dumped by her man and the greatest tragedy of all strikes … she turns 30! Naina’s friends lend her a shoulder to cry on while also pointing out that she should have babies soon since her biological clock is ticking. I guess menopause strikes women very early in this film. Naina copes by crying, mooning about the house, consuming intoxicating liquids, begging her ex-boyfriend to get back with her, sleeping with another ex who enters her life just then, puffing away at her ciggies, misbehaving at that recently-ex-boyfriend’s engagement which she attends accompanied by her current squeeze, grovelling at the feet of the ex-boyfriend and even fighting with his parents over him.
I cringed while watching this woman who has so much going for her – she’s beautiful, smart and talented – and yet is willing to repeatedly trample on her own dignity for that man. She’s not the only one. Her married friend casually shrugs off her husband’s infidelity because her baby needs a daddy. She also says clever things like: “Divorce seems so pointless now.” Why? We’re not told. Perhaps because it sounded like something an SATC babe might have said?
All this is really a pity because Turning 30!!! had so much potential. Gul Panag has a lovely, likeable face and an easy acting style that the industry has not explored enough. Purab Kohli is sincere and always nice. The entire cast is easy on the eye. The settings are all very pretty and polished. And the first half of the film is actually quite funny in bits and parts. But there’s too much that’s wrong with Turning 30!!! for these to be considered redeeming factors.
Strange things happen in this film. Naina devises a marketing plan which involves starting a club for 30-plus women. But for some unfathomable reason, it features women who appear to be in their 50s, 60s and above. There’s boob job advice directed at the heroine which is kind of weird considering that her pert and naturally voluptuous bosom is staring us in the face.
To be fair to the writer-director, the clichés extend beyond the single woman. Everyone’s a certain ‘type’ here. The artist type boyfriend wears curtain cloths for neck-scarves. The ad type wears a hat in office and is gay. And the cool woman type hangs out at cafes and bars, plays Truth or Dare with her friends, uses words like “closure”, has a lesbian gal pal (oh, the height of coolth!), discusses “pussy pamperers” with her buddies (their words please, not mine!), drinks a lot, smokes a lot and has lots of sex.
Wasn’t producer Prakash Jha monitoring the goings on at all?! Why didn’t he notice some of the stodgy, stagey dialogues written in a language that English-speaking Indians don’t speak? He’s even allowed the music directors to shamelessly borrow some easily identifiable bars from Bryan Adams’ Please forgive me for the background score.
And oh that irritating voiceover by Naina! Each time she has dispensed a gem that’s meant to induce awe in us, the director dutifully signals the audience by raising the volume of the music many notches. Triteness just trips off Naina’s tongue effortlessly. When her boyfriend wants to get back with her, she says gravely: “Find yourself first, Rishabh, and you’ll find love,” and better still, “Read my book, it has all the answers.” The film, sadly, has none.
At the start of Turning 30!!!, Naina is turning 30. By the end she’s 31. I don’t blame her. I think I too aged a year while watching this film.
Rating (out of five): **
Posted by Anna MM Vetticad at 1:13 PM