REVIEW 73: THAT GIRL IN YELLOW BOOTS 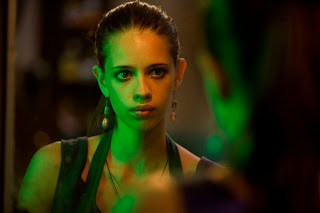 Unusual title, unusual storyline, intriguing first half, a second half that dissipates the pre-interval gains, resulting in a film that’s overall a disappointing experience … that sums up my feelings towards That Girl In Yellow Boots.
The promising opening introduces us to Ruth (Kalki Koechlin), a British national in Mumbai, struggling to renew her visa while she searches for her Indian father who left the family when she was a child. Ruth works in a massage parlour and is open to giving her male clients a “handshake” for an additional Rs 1,000. The visa authorities, the police, her no-good boyfriend’s creditor … they’re all out to exploit this white girl with the sleazy job, knowing that she’s desperate to stay on in Mumbai at all costs.
So far so good. Kalki is spot-on as the tourist who works without a work permit, knowing the “favours” she will have to dole out to those who discover the truth. The smaller roles too are well performed especially by debutant Prashant Prakash as Ruth’s junkie boyfriend who is not above exploiting her in his own way; Shaitan’s virulently violent Gulshan Devaiah who lends him money and now wants Ruth to pay up in kind; Naseeruddin Shah as Ruth’s fond client who wants nothing more than an honest massage from her; and Puja Sarup as the massage parlour manager/receptionist whose frivolous and incessant telephone chatter is hilarious. Aided by some good dialogue writing, these sundry characters go about their daily business in precisely the way you’d expect them to in the so-called City of Dreams.
This is not a Mumbai of glamour and glitz, nor is it about slime, grime, the basest elements in the underworld or extreme poverty. This is Semi-Middle Mumbai, where the builder who wants a “handshake” from Ruth is embarrassed at the demands he’s making, where Ruth likes to keep her floor spotlessly clean but can do nothing about those filthy walls. With the help of Rajeev Ravi’s atmospheric cinematography and Wasiq Khan’s production design, director Anurag Kashyap brings to us this disturbing Mumbai and his hemmed-in characters in a way only he can, with his distinctive sense of humour, in a style that’s as real and natural as it gets. Ruth is a particularly interesting creature – despite the abuse she is subjected to, she still manages to retain a certain feisty sense of independence that is almost inspiring. I particularly enjoyed hearing her dip into her constantly expanding Hindi vocabulary to tell a cheating autorickshaw driver: main firangan hoon isliye mujhe ch****a banane ki koshish mat karna.
But the story goes awry in the second half when a straightforward account is given an unexpected twist that suddenly makes it feel like a thriller-you-never-expected-it-to-be. No doubt the intention was to put the spotlight on a serious issue (I won’t say what), but the progression of events feels forced and the ending contrived. I must add that this is the one and only issue I had with Kashyap’s debut film as a director, the very brilliant Paanch that was inexplicably not released by the producer even after a Censor ban on it was lifted about a decade back: that film too took an unforeseen turn right at the end, a turn that came across as being completely unnatural and jarring in comparison with the mood of the rest of the film. I remember discovering back then that that climax was not Kashyap’s choice but was shoved down his throat by the producer. But Kashyap himself is the producer of That Girl In Yellow Boots so I wonder where this ending came from.
More’s the pity because I really did like the look and feel of the first half of That Girl In Yellow Boots, and the concept is certainly uncommon. Despite my reservations about the film’s climax, I also enjoyed that cleverly inserted fleeting look-in by Rajat Kapoor – a guest appearance that serves to throw us off track, that actually serves a purpose instead of being a mere gimmick! Don’t ask me what I mean – you’ll know if you watch the film. My lips are sealed!
Rating (out of five): **
CBFC Rating:                       A with four sound cuts
Running time:                        115 Minutes
Language:                              Hindi
Posted by Anna MM Vetticad at 8:16 PM